University of New Orleans Welcomes Crowds at "Get to Know UNO" 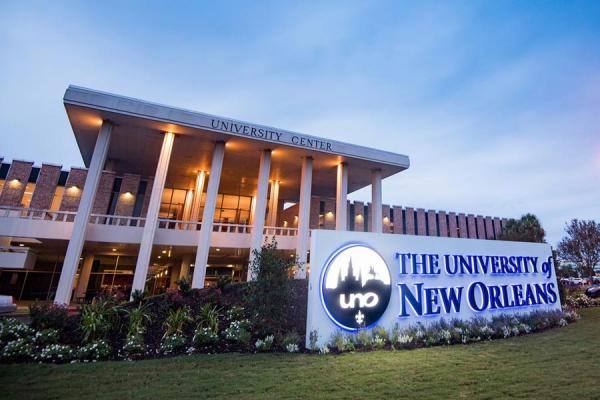 University of New Orleans Welcomes Crowds at "Get to Know UNO"

The University of New Orleans campus buzzed with energy and excitement on Saturday as UNO faculty, staff and administrators welcomed more than 400 prospective students to campus for the University's new signature fall open house, Get to Know UNO.

"UNO is a public university and we're proud to be a public university," Executive Director of Enrollment Services Dave Meredith told the prospective students and their guests in an opening ceremony. "We're proud to serve the people of the City of New Orleans, state of Louisiana and the entire United States and indeed the world. At public universities, we welcome open debate and the exchange of ideas. In fact, if you choose to attend UNO, you will have the opportunity to engage in that exchange. Some of you may encounter folks today exercising that right. They are not part of this program, but it's all part of being at a public university."

Resplendent in UNO Blue, several hundred volunteers -- from admissions staff and UNO faculty to UNO Ambassadors, study abroad representatives and student-athletes -- gave up their Saturdays to be on hand to introduce the prospective students to campus. Together they walked guests through a four-hour program designed to introduce all the resources and programs UNO has to offer.

Meredith introduced prospective students to highlights and accomplishments of the University through an interactive exercise called "How Do You Know?" in which he backed up University bragging points with factual statements and statistics. He let guests know, for example, that UNO students hail from 97 countries and that excellent academics can be demonstrated through University accomplishments, such a $660,000 Naval research grant recently awarded to UNO researchers to design Naval defense mapping systems.

Admissions counselor Toni Slessinger showed guests a "Heartbeat of the Crescent City" trailer and emphasized that UNO is a vital and critical component of the city's cultural life and economy. She informed the group that UNO is one of the state's most diverse universities and encouraged prospective students to participate in one of UNO's many study abroad programs, which can be covered by financial aid.

The University is also known for its affordability, ranking among the top in the country for students carrying the least amount of debt upon graduation, said Slessinger, who cited strong starting salaries.

"You're not only getting an amazing experience and having a lot of fun, you're going to get a great job at the end of it," Slessinger said. "A UNO degree does mean a lot to a lot of people, especially in the city."

Then the visitors enjoyed a jambalaya lunch at The Cove, the student center on Founders Road, while listening to a performance by the UNO Jazz All-Stars. The bold and brave among them tried a fun and fascinating treat: ice cream made with liquid nitrogen by the University's Graduate Chemical Society and undergraduate Chemistry Club.

Students who were ready to apply, as well as interested visitors, received a tour of the one-stop-shop Privateer Enrollment Center where first-year academic advisers were on hand to walk them through the application process. Others received admission information in the Student Success Center and financial aid information in the Privateer Pride room.

Four rounds of campus tours were offered, as were smaller tours of the University's Music and Film and Theatre facilities, Engineering facilities and the University's residence halls, which were built in 2007 and offer apartment-style-living. Dormitory residents each have their own bedrooms and share a bathroom with just one other person.

"We feel like a private university with a public school tuition," said one UNO admissions counselor. She told her audience of the University's 18:1 faculty-student ratio and average class size of 22 students. "The teachers know your names, they know who you are and they want to help you figure out what it takes to achieve your dreams."

A First Year Experience "alpha team" of counselors "are going to be there just for you," she said, highlighting the study skills, time management skills and other skills taught in University 1001, to help ensure a strong transition from high school to college.

The University she said is six miles from the French Quarter, 10 miles from the Magazine Street shopping district and 16 miles from the Louis Armstrong International Airport, a real selling point for out-of-state students who travel by airplane to get to college.

The University of New Orleans, "Heartbeat of the Crescent City," an Admissions primer for prospective students