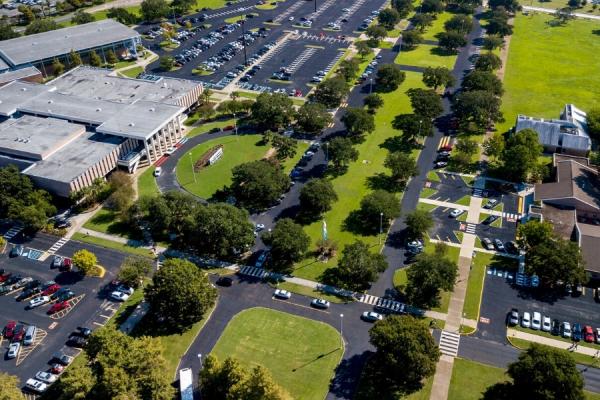 The solar panels will be installed on top of the University Center and Recreation & Fitness Center (pictured in the upper left hand corner).

The University of New Orleans has finalized plans with Entergy New Orleans (ENO) for a solar panel project on top of two buildings at the University that will add 600-Kilowatts of clean energy to the New Orleans grid. This partnership with UNO is an important step for ENO's commercial rooftop solar program, and the community, according to company and university officials.

The project will aide in bringing New Orleans to the forefront of cities powered by renewable energy by adding to ENO's already clean energy mix, ENO officials said. In addition to furthering New Orleans' energy sustainability, this partnership also helps decarbonize our city and demonstrates that ENO and UNO are committed to the environment and renewable energy.

In April, Entergy renewed its commitment to a lower carbon energy future announcing a new climate objective by 2030 of emitting 50 percent less carbon dioxide for every unit of electricity, based on 2000's numbers.

"The University of New Orleans is one of the city's most important public assets," said John Nicklow, President of the University of New Orleans. "Contributing to renewable power with the installation of these rooftop solar panels shows a partnership not just with Entergy, but with the community as well. Our hope is to leverage this opportunity for both educational and community outreach for the University in the areas of renewable energy, sustainability and related fields."

The solar panels will be installed on top of the University Center and the Recreation & Fitness Center. To read about some of the University’s other recent sustainability efforts, click here.