Class of 2026 Welcomed at New Student Convocation: ‘Our expectations of you are high,’ President Nicklow

While Monday marked the start of the fall semester for thousands of students at the University of New Orleans, on Tuesday the Class of 2026 got a welcome to campus party in their honor. First-year students were feted during a convocation at the UNO Lakefront Arena and later treated to a cookout at the University Center.

The University’s tradition, which included faculty marching into the arena in full academic regalia while Pomp and Circumstance played, commemorates the start of the academic journey for new students with a formal opening ceremony followed by ice-breaker games.

Members of UNO men’s basketball team also were on hand to welcome the newest Privateers.

It is in this same venue that these students will don their own gown and mortarboard to conclude their undergraduate journey to a college degree.

First-year student Abril Espino of Chalmette, Louisiana, holding a blue UNO T-shirt in hand, said she was nervous, but excited about starting college.

“Coming from a small town and school, you knew everybody,” Espino said. “Here, it’s like people are coming from Ohio, Oklahoma. I’m like, ‘Oh, OK! I have no idea who you are!’

“But, it’s been good,” Espino said with a laugh.

Brendan Mott, a UNO graduate student and volunteer at the T-shirt table, remembers those first-year jitters.

“I was just really worried about meeting new people,” said Mott who graduated last spring. “My advice to freshmen: Don’t be afraid to introduce yourself and ask questions because, A, they might know the answer to your question or, B, they’ll have the same question as you!”

Nicklow told the students that they should be proud of their academic accomplishments thus far, and that they have taken “a leap toward enrichment,” by enrolling at the University of New Orleans. However, he told them much work lies ahead.

“I expect there to be sacrifice and even some struggle in your future. Of course, there will be. We are learning how to live in the continued presence of COVID-19, which brings its own obstacles and worries,” Nicklow said.
“In addition to those, your intellect will be challenged. Make no mistake; our expectations of you are high. That is not something to fear. Embrace it and focus on your ability to persist; it is all part of higher learning, and you would not be here today if we weren’t confident in your ability to succeed.”

“I’ve been in your shoes a number of times,” Golz said. “As one of four kids in a military family, I attended at least four different grade schools; three middle schools; and two high schools. I was always the new kid.”

To help adapt to the new surroundings, Golz encouraged the students to step outside their comfort zones, ask for help and get involved.

“By participating in student organizations on campus, you’ll make new friends, learn valuable skills that employers look for when hiring our graduates, and you’ll be able to make this campus your own,” Golz said.

Charles encouraged students to stay focused and continue to believe in their abilities no matter the difficulties they might encounter.

“So to the class of 2026, don't ever doubt your journey and how far you have come,” Charles said. 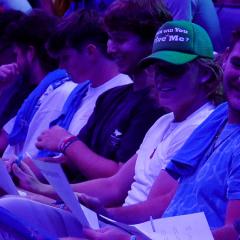 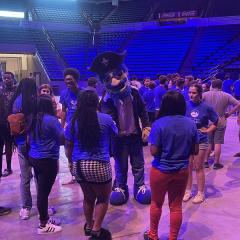 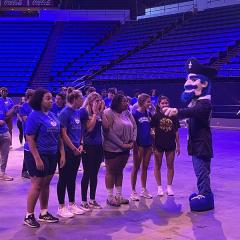 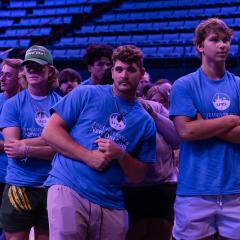