Alumnus Albert Allenback plays saxophone and flute as part of the Grammy-nominated New Orleans band Tank and the Bangas.

University of New Orleans alumnus Albert Allenback’s journey to becoming a member in one of the nation’s hottest bands—and a Grammy nominated act to boot—began with a flyer and a plea.

Allenback was a sophomore at UNO when he spied a flyer in the Performance Arts Center advertising for musicians at a local church. A jazz studies major who has been playing the saxophone since sixth-grade, Allenback contacted the church.

“I was in the mode where I was taking any opportunity, any gig, anything I could,” Allenback said.  “So, I went and played at this church … that’s how I met Norm.”

Norman Spence, keyboardist for Tank and the Bangas, was the piano player at the same church. When the soulful, spoken-word funk band needed a flutist for a song, Allenback offered to play.

“Norm brought me in and we did a show at (Tipitina’s). It did well. I had fun, people responded to it,” Allenback said. “I remember afterwards, I took the manager of the band, Tavia Osbey, by the shoulders and said, ‘Please, take me with you!’ I was serious!”

Allenback was enthralled by the band’s creative energy, the intensity and intimacy of the live performances and the audience engagement. Therefore, he set out to make himself useful.

“I just started being as involved as much as I could, writing music unsolicited, just doing extra stuff and just immersing myself into the things that these folks had going on,” Allenback recalled. “Then, before I knew it, I was one of the core band members.”

Tank and The Bangas

Allenback, a saxophone and flute player, joined the band in 2014, two years after it was formed by lead singer and poet Tarriona “Tank” Ball. The group has performed to sell-out crowds at major shows and festivals around the country and abroad, including Coachella, Bonnaroo and Jazz à Vienne in France. They are also a staple at Jazz Fest in New Orleans.

The band was the unanimous judge’s choice out of more than 6,000 entries for NPR’s “Tiny Desk Contest” in 2017. The competition requires artists to perform and submit an original work. The winner is invited to NPR’s newsroom in Washington, D.C. where they literally perform a concert at and around the desk of NPR producer Bob Boilen.

“Tiny Desk just catapulted us and we were really, really, really in demand,” Allenback said. “And the beautiful thing about that is that video … is on a YouTube channel and people find that thing all the time and discover us all over again. It not only jumped-started everything; it keeps bringing people into the fold. It’s really great.”

The group released their first major label album, “Green Balloon” in 2019 and was nominated in the Best New Artist category for the 2020 Grammy Awards, a list that also included Billie Eilish and Lizzo. The band recently released a follow-up album that’s garnering attention and praise for its unique artistic blend of music and social consciousness.

“I always hoped that it would turn out this way,” said Allenback, who recalled telling a friend during a jazz combo rehearsal at UNO that the band was destined for fame.

Allenback grew up in Montgomery, Alabama, listening to his dad’s eclectic music collection. The collection started with cassette tapes and evolved into CDs that over the years grew into multiple volumes of “Al’s Favs,” Allenback said with a laugh.

“It’s everything from Stan Getz to Stevie Wonder to Earth, Wind and Fire to George Michael to Dexter Gordon to like Burt Baccarat,” Allenback said. “It’s just all over … and he would have those playing in the car, so I got this breadth of musical sampling because he is such an appreciator. He would blast classical music on Sunday mornings to wake us up and then make us waffles or whatever. It was awesome!”

When Allenback was 11, his dad, a former drummer in a high school band, took him to a Kirk Whalum concert.  He remembers Whalum walking through the crowd and serenading women with his soprano saxophone.

“I was like, ‘Wow, I want to do that,’” Allenback said. “I went to school the next day and told my band director. I was telling him all about the concert and he was like, ‘You can do that.’

“I just got this thing in my head, this goal ... I want to play saxophone on stage. It just has been a guiding principle.”

Allenback was awarded the Ellis Marsalis scholarship to attend UNO and credits the jazz studies program for helping prepare him to become a professional musician.

“I got to see first-hand the best, most artistic musicians in the world, and that’s what the jazz studies department was populated with,” said Allenback, who earned a bachelor’s degree in music in 2016.

“It certainly prepared me to do what I’m doing now because I have a great foundation for how to play improvised music and a lot of my job is improvising,” he said. “I think that one of the most beneficial things was playing in combos at UNO where you have to navigate the music together with people that might be friends or might be associates. A frequent professional obligation is to learn how to make the best music with people you don’t know very well.”

Allenback said he is grateful to UNO for providing a program that also gave him a chance to perform live with professional musicians while he was a student via Jazz at the Sandbar. Established by the late faculty member Ellis Marsalis in 1990, the program pairs seasoned professional musicians with UNO jazz students in front of a live audience on campus at the Sandbar.

“I got to play with these people, not because I earned it or because I was on the gig and got called,” Allenback said. “It was just because I went to (UNO). Here’s a chance to get your feet wet. I will never forget that.”

“That name is a terrible pun, but it’s representative of me and my musical partner, Alfred Banks, a rapper extraordinaire,” Allenback said. “I do the saxophone thing, he loves shoes. He is a huge sneakerhead!”

The best part of being a performer for him, Allenback said, is playing live.

While on stage Allenback said he concentrates on trying not “to mess up” while also pondering the gift of being allowed to perform music.

“That’s the energy I like to play from, just being appreciative while it’s happening,” he said. “But honestly, I’m pretty nervous.”

When asked to describe the vibe of playing with Tank and the Bangas, Allenback lets loose with a litany of descriptors.

Allenback said that Ball has the ability to create such a strong connection with the audience through music that is complex and thoughtful.

“Tank can be this interlocutor with the audience to just communicate it so effectively and people actually dig this music because she is singing or delivering and believes in it,” he said.

While Allenback says he was always hopeful about the band’s success, he said he is still absorbing the enormity of their popularity—sold-out tour dates, a Grammy nomination, albums. His advice to others: Swing hard in case you hit it.

“I’m not talented in that these things have come easy to me,” Allenback said. “But I have tried harder than most and that gave me better odds to be where I am today.”

Finally, he delivers a heartfelt shout-out to UNO:

“Thanks UNO PAC (Performance Arts Center) for holding the flyer that got me into one of the coolest bands in the world!” 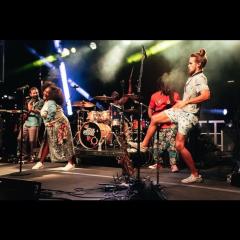 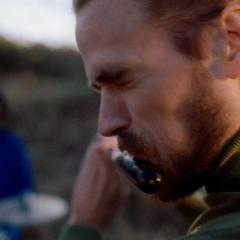 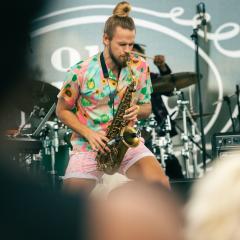