The Krewe of UNO rolled through campus on Tuesday celebrating its 2022 theme, "Back to the Beach.”

After a one-year coronavirus-induced break, the Krewe of UNO rolled through campus on Tuesday celebrating its 2022 theme, “Back to the Beach,” with plenty of Mardi Gras sass, beads, cups, coins, and other trinkets.

“The Krewe of UNO is so excited to hit the streets of our Lakefront campus this year after a one-year hiatus from an in-person parade format,” said Amanda Robbins, director of residence life.

Last year, the krewe rolled virtually in keeping with the City of New Orleans’ coronavirus restrictions on Mardi Gras parades with the theme: “Oh, the Places You Can’t Go!”

“We have incorporated components from our 2021 virtual shoebox parade into our 2022 live parade,” Robbins said. “Live streaming with fantastic co-hosts and commentators LeeAnne Sipe and Mike Esordi!”

President John Nicklow and Stacy Nicklow were among the processional of 22 organizations tossing beads and trinkets from atop a privateer ship.

Marching bands from Sophie B. Wright Charter School and Morris Jeff Community School provided the soundtrack as the parade, which started at 12:30 p.m. from The Cove, wound through campus to the University Center.

“They provided snacks and a centralized meeting place,” said Fadeke Adeola, a graduate student majoring in biology who stood beside a massive bag of buttered popcorn and a sign representing the Pontchartrain Hall’s STEM community.

Kayla Andrews, a teacher in UNO’s Intensive English Language Program, captained a krewe of walkers called the IELP World Wide Walkers, a nod to UNO students who hail from a variety of countries around the globe.

“This is great,” Andrews said regarding the parade. “For many of our students it’s their first Mardi Gras. We get to share New Orleans culture with them.”

And for all the rule bending, smashing and breaking that is part of the Laissez les bons temps rouler Mardi Gras atmosphere, perhaps the purest appreciation of that leniency came via one of the youngest participants. As students from Hynes Charter School-UNO marched by, one student excitedly exclaimed to a classmate: “I LOVE walking in the street!”

Meanwhile, the UNO Filmmakers made a creative splash by turning a student into a prop. The man sat on top of a car with a black “hat” in the shape of a reel-to-reel camera that covered his entire head and neck. Colleagues riding in the trunk of the car did the honors of throwing out beads.

“After the difficult year and the difficult week that we've had as a Privateer community, we are fortunate to be able to bring this bit of joy to campus again,” said LeeAnne Sipe,
assistant dean of student affairs, who helped to organize the event.

The parade culminated with a free king cake party at the University Center. 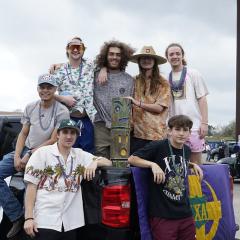 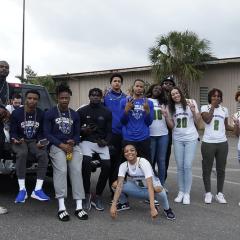 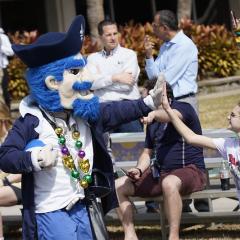 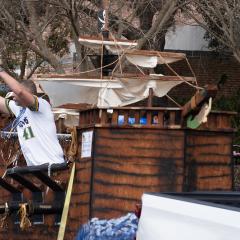 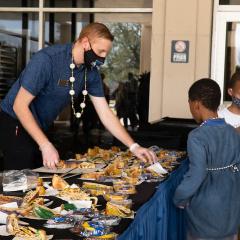 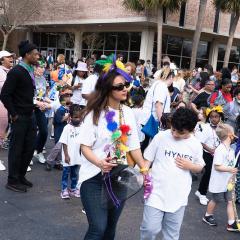 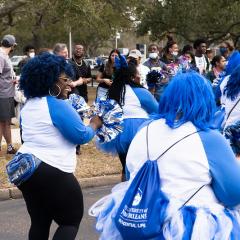 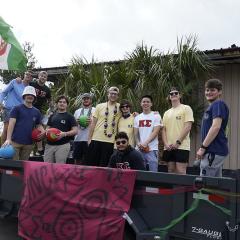 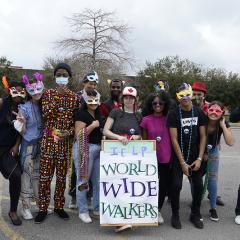 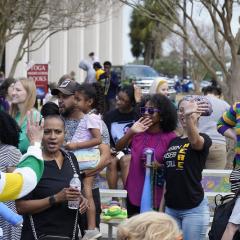 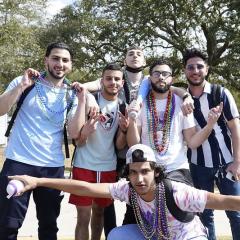 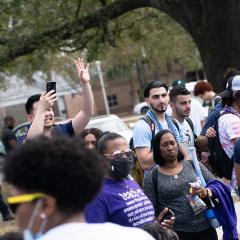