Alumnus Jericho Brown delivered the keynote commencement address to fall undergraduates on Friday, Dec. 10. Brown, who earned an MFA in creative writing from UNO, was awarded the 2020 Pulitzer Prize in Poetry.

In a measured poetic cadence, University of New Orleans alumnus and Pulitzer-prize winning poet Jericho Brown urged the fall graduating class of 2021 to “be radical” and to recognize the gift that is their own unique talent to give to the world.

The 860 candidates who were eligible to participate in the ceremonies represented 26 U.S. states and territories, and 24 countries around the globe.

He earned a 2020 Pulitzer Prize in poetry for his poetry collection “The Tradition,” published by Copper Canyon Press.

“His stature as a renowned and celebrated poet who has received some of the world’s most prestigious awards, his preeminence as an educator of creative writing, and his status as an alumnus of the University of New Orleans warrant the granting of a Doctor of Humane Letters,” Nicklow said.

“Be radical or be ready to get out of our radical way,” Brown said. “No, I have not come here to incite you to riot. I know it is possible to love a nation and pay taxes to a nation knowing that same nation intends to suppress my vote. How can we ever reconcile these?  You reconcile it by giving the gift only you can give, by doing what you love so well that I end up inspired by the fact that you did it. We need you and need what you do!  And we need you to look at the future knowing the past.”

Brown later expounded on his definition of radical.

“To be radical is to be inclusive, to love beyond class and sexuality and region,” Brown said. “Be radical. I’m counting on you. We quite literally need you to survive.”

Brown, who earned his MFA while working full-time, also paid tribute to the sacrifices many of the graduates made over the years in order to wear their commencement regalia on Friday.

“All of us made it to this point because we had enough trust in our God or our family or our professors or ourselves,” Brown said.

Tran, who earned a graduate degree in accounting with an emphasis in auditing, attended class while raising two young children ages, 4-and 5-years-old.

“I got a message from a friend this morning and she said I deserve this 10,000%,” Tran said laughing. “It means a lot. I have two small kids and it was difficult for me to get to this day.”

Peterson, who earned her bachelor’s degree in elementary education, described her graduation day as a “rebirth.”

As she waited for the ceremony to start, Peterson stood smiling and laughing with classmate and fellow college of education graduate Emily Sammartino.

Sammartino, who said she has accepted a job as a special education teacher in St. Charles Parish, wore a decorative mortarboard with the words: “You have no idea how high I can fly.”

“I choose that quote because it shows great determination and strength to move on from one thing and know that something better is coming,” Sammartino said. “I’ve been crying all morning … I’m excited to graduate because I know I can start my job and now be the educator. So, this is a very big day for me!”

The arena stands were filled with friends and relatives of the graduates, who waved posters and pictures, applauded and shouted out words of affirmation or employed the use of an air horn to express their love and pride.

In turn, in keeping with the celebratory atmosphere, the graduates waved excitedly, gave thumbs up, posed for quick pictures and, in some instances, danced across the stage. And, in keeping with a culture that is uniquely New Orleans, the ceremony culminated with a brass band and second-line parade from the arena floor as confetti drifted down from the ceiling. 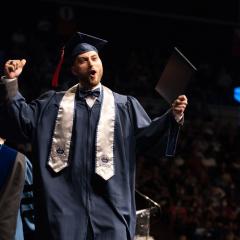 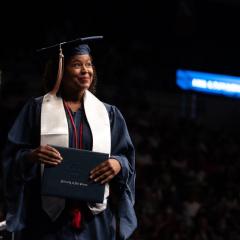 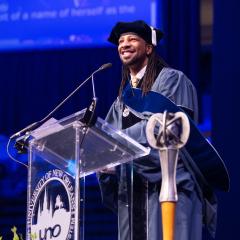 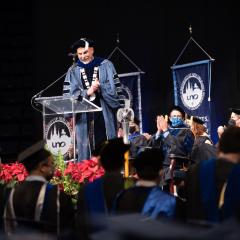 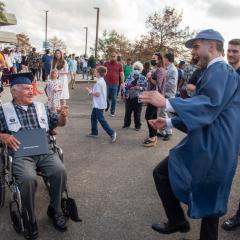 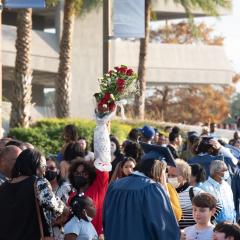 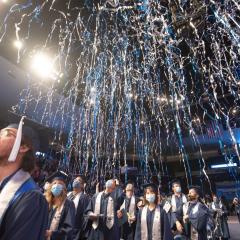 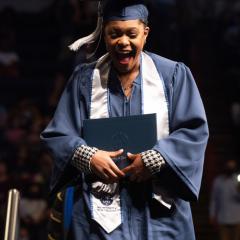