University of New Orleans alumnus and attorney Juan LaFonta speaks during the grand opening of the Multicultural Lounge that bears his name in the University Center.

New Orleans attorney Juan LaFonta recalled the struggles he faced trying to fit in among his Black peers as a student at the University of New Orleans in the 1990s.

LaFonta’s fair skin and straight hair, traits of his Creole heritage, did not quite compute with some Black students who thought he was attempting to “be cool” by appropriating their culture.

“So my first semester at Bienville Hall I was kind of fighting one battle trying to stay housed and was also fighting a battle with people who didn’t accept me for who I was,” LaFonta said. “It was people who were not from here that basically didn’t get the whole Creole thing … you don’t necessarily look like what, supposedly, a Black person is supposed to look like in the United States, so I used to get a lot of heat.”

LaFonta, who said he ran away from home at 15 and was homeless before enrolling at UNO, credits UNO faculty and staff members for creating a community of support that helped him to navigate financial hurdles and social troubles.

“Where would I be if those people hadn’t created safe spaces for me? Where would that guy be who ran away from home when he was 15, who was sleeping in a trap house in Carrolton,” an emotional LaFonta asked. “There were safe spaces here at this University that got me out.”

LaFonta shared the story during Tuesday’s grand opening of the Juan LaFonta Multicultural Lounge in the University Center. It’s a space designed by the University of New Orleans Diversity Engagement Center aimed at building a support community for all students, said Desirée Anderson, the associate dean for diversity and student affairs.

“This space was envisioned as a visually representative space on campus where students from all backgrounds could see themselves reflected and find the resources and people to survive and thrive,” Anderson said. “Oftentimes, students do not know where to go to find a community or to get answers about specific experiences they have on and off-campus and this space will serve as a point place to find direction.”

The project was funded with help from LaFonta and the UNO Student Government Association.

“This is not a finished product,” Anderson said. “It is just a start. My goal down the line is that it not only becomes a space for where people can gather, but that we are doing the type of programming, the type of mentoring, we’re building those types of relationships, where people feel that they can grow together as a people and as a community.”

UNO President John Nicklow thanked LaFonta and the SGA for their support, noting that diversity, equity and inclusion are core values contained within the University’s Strategic Plan.

“My goal is to create the most welcoming and inclusive campus environment possible,” Nicklow said. “We still have a lot of work to do and a new Multicultural Lounge is not a cure-all. But I believe that it fills a valuable need in giving our students a place of peace and acceptance where they can be themselves.”

SGA President Amber Lemelle said she is excited to be a part of the Multicultural Lounge.

“I can’t wait to see how it grows,” Lemelle said. “I think that this is an important space. I’m excited to be a part of it and I’m excited to see the students fill it up.”

LaFonta, who graduated UNO in 1997 and later earned a law degree from Southern University, said for him the lounge answers a question that former UNO history professor Raphael Cassimere would often ask: What are you doing to support your community?

Cassimere, who spent 35 years in the history department, is currently an emeritus professor of history. He was the first Black instructor hired at UNO and made his mark on the political landscape of New Orleans by helping lead boycotts as president of the NAACP Youth Council during the Civil Rights Movement in the early 60s and 70s.

“When I started speaking to the people (at UNO), I said this is what Cassimere was talking about,” a tearful LaFonta said. “What are you doing as a Black male to impact your community and create safe spaces for your people?”

“I’m hoping we have a space that it doesn’t matter what your money is, what your religion is, what your race is, how you look, your sexual orientation, this space will be safe,” LaFonta said. “With things being the way they are now, places like this are more important than ever before.” 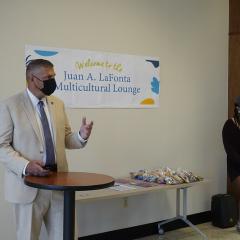 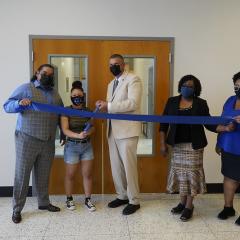 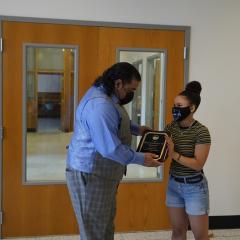 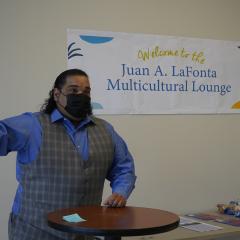