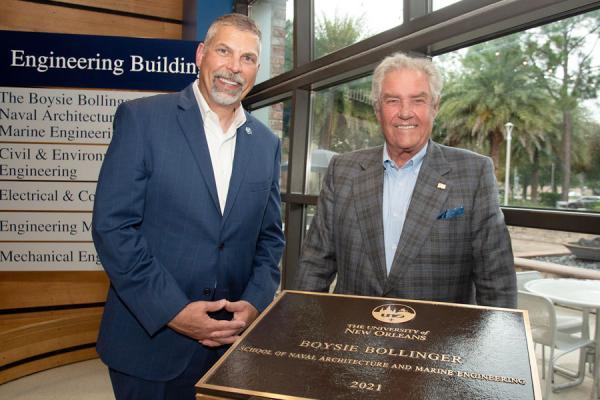 UNO President John Nicklow (left) and Boysie Bollinger celebrate the naming of the Boysie Bollinger School of Naval Architecture and Marine Engineering at an on-campus event on Tuesday, August 3.

“On behalf of our students, faculty, alumni and the entire university community, I am incredibly grateful to Boysie for his commitment to UNO,” said UNO President John Nicklow. “This gift will have tremendous impact on current and future students by providing greater access to a world-class education and state-of-the-art equipment. This kind of generosity can and will change the lives of students.”

“Over my career, Bollinger Shipyards has had a lot of graduates from both the College of Engineering and the School of Naval Architecture and Marine Engineering. And I would put them up against anybody else in the country,” Bollinger said. “So UNO always had a very special place in my heart and it’s something I’ve been close to for a long time. I am very proud of what this school has accomplished and I thought it was a good time to give back.”

Bollinger’s gift will create endowed scholarship support for undergraduate and graduate students in the College of Engineering with preference given to those majoring in naval architecture and marine engineering. It will also fund equipment upgrades in areas such as the Ship Design Computer lab and the 128-foot-long marine towing tank, which allows for testing models of ships and offshore structures in a variety of water conditions.