University of New Orleans senior Perry Hawxhurst poses with his championship belt won as part of the wrestling tag team Hawx Aerie with his dad, Luke.

“I can be larger than life in the ring when I have to act,” Hawxhurst said. “But, in person I really don’t like to be too braggy or over the top.”

Indeed, the well-mannered Hawxhurst blushes a bit when speaking about the national attention he garnered last year after a video of a wrestling stunt went viral.

“I knew it was going to be big, but I didn’t expect it to be as big as it was,” Hawxhurst said. “It was on all over the place … I had people coming up to me saying, ‘Hey man, this is you!’”

Hawxhurst, who is a senior majoring in exercise physiology, captured the attention of the national media after one of his wrestling moves became a social media sensation with more than 8 million views. The video was shown on ESPN SportsCenter and local media outlets, among others.

As part of a benefit show produced by his dad’s training facility, Wildkat Sports, Hawxhurst jumped from the second story of the Esplanade Mall in Kenner into a wrestling ring during a match.

While acknowledging the “coolness” of the jump, Hawxhurst is quick to warn against anyone attempting to copy the stunt.

“I am a trained stuntman,” he said. “Not only that, I’m a professional wrestler and my dad has also been doing stunts since 2007.  I would not advise anybody to do that without proper training and I had proper training.”

The event happened in February 2020, prior to restrictions imposed due to the coronavirus pandemic, and drew hundreds to the Kenner mall.

While confident in his training, one disturbing thought flitted across Hawxhurst’s mind as he carefully climbed over the second-floor railing.

“Hopefully, my mom doesn’t kill me, that was my main one,” Hawxhurst said while laughing. “She didn’t know. Nobody knew. It was actually the day of we decided to do that.”

The impact of landing, absorbed some by the other wrestlers, was still painful, Hawxhurst said. However, no one was seriously injured, he said.

Hawxhurst was a varsity wrestler at Grace King High School in Metairie and is a former state wrestling champion. He fell in love with the sport as a child watching his pro wrestler father, Luke Hawxhurst.

“Watching my dad, who has been a wrestler since before I was born, was the coolest thing in the world. He’s basically my hero,” Hawxhurst said. “Since I was young I’ve always wanted to be a professional wrestler.”

His first pro wrestling match was a “battle royal” in a North Carolina convention center that included about 20 other wrestlers of various ages and weights. Hawxhurst was 18.

“I think I was about the sixth person left in the ring before I got thrown out. So, I Iasted a good amount of time for my first match,” he said. “Every time I get in the ring, I get better.”

His father produces shows around metro New Orleans, mainly on Friday and Saturday nights, Hawxhurst said. Other times they are on the road, participating in shows sponsored by other production companies.

The duration of his matches can be as little as a minute or as much as a half hour or longer, he said.

“Most of my matches are between 10 and 15 minutes,” said Hawxhurst. “I’ve gone 40 minutes before … you’ve got to have good conditioning, that’s why we train.”

There are no age or weight categories, said Hawxhurst, who is 22.

Hawxhurst describes his wrestling technique as more technical than acrobatic. He goes for a hold or a body slam versus high dives.

“It’s more of wearing my opponent down and keeping them down,” he said. “I do acrobatic stuff, but not too much.”

The best thing he likes about wrestling, Hawxhurst said, is tagging with his dad. The two have had matches across the U.S., in England and Mexico. Their wrestling skills have paved the way for them do stunt work on movies and a television series.

He is a member of the Screen Actors Guild, Hawxhurst said.

For the past seven months, he and his father were working as wrestling coordinators for a new series on the Starz network called “Heels.”

Hawxhurst said he also snagged an acting role in the series, which is about a wrestling family in a fictional Georgia town. The series is set to premiere in August.

On the wrestling front, now that the pandemic restrictions are being lifted, Hawxhurst said his father is planning a show to celebrate his company’s 10th anniversary.

“I’ve learned a lot from my dad, Wildkat Sports and the coaches there,” he said. “We took a hiatus during COVID, but we’re coming back stronger. Hopefully, we’ll do a show around July or August. I’m excited to have fans coming back.” 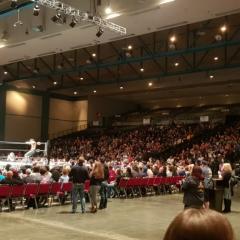 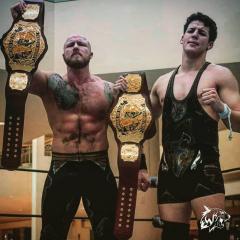 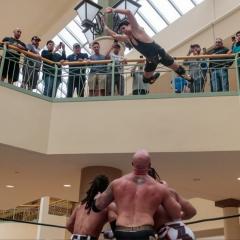 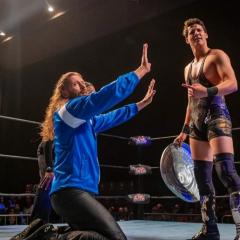