Raphael Cassimere Jr., an emeritus professor of history and civil rights leader, was the principal speaker at the University of New Orleans spring 2021 commencement ceremonies.

As a member of the University of New Orleans graduating class of 1966, Raphael Cassimere Jr. recalled his 93-year-old grandmother’s pride in his accomplishment. She was born during the Reconstruction Era and had witnessed social and political progress for African Americans, Cassimere told graduates this week at the University of New Orleans spring 2021 commencement ceremonies.

“Grandma was frail, but oh so proud to see her grandson graduate from this white university,” Cassimere said. “She referred to UNO as ‘white’ and initially, it was an all-white administration and faculty, including a few who were openly hostile.

“Black students were barred from the school cafeteria and all non-academic functions. But over the years, through student protests, black and white, as well as some sympathetic faculty, UNO slowly, very slowly became more racially diverse and more inclusive.”

Cassimere, who earned his bachelor's and master's degrees in history from UNO, witnessed the transformation first-hand as a student and later as part of the University’s faculty.

On Wednesday and Thursday, he helped to usher in another historical moment for the University with the return of in-person commencement ceremonies at the Lakefront Arena. Because of the COVID-19 global pandemic, the University has held virtual commencement events since spring 2020.

This year, four separate in-person commencement ceremonies were held in the Lakefront Arena to comply with city and state capacity limits instituted due to COVID-19. Cassimere delivered the keynote address.

Cassimere was the first Black instructor hired at UNO and made his mark on the political landscape of New Orleans by helping lead boycotts as president of the NAACP Youth Council during the civil rights movement in the early 60s and 70s.

Currently an emeritus professor of history, Cassimere remained in the history department for more than 35 years, rising to rank of professor. He retired in 2007.

“During my nearly half-century here as both a student and faculty member, I watched with satisfaction and pride how UNO became more racially, gender and culturally inclusive,” Cassimere told the graduates. “We learned that often we—black and white, Christian and non-Christian—had more common similarities than differences.”

His grandmother, who died shortly after he earned his bachelor’s degree, would be pleased at the progress, Cassimere said. However, she would be alarmed at what appears to be a resurgence of racial prejudices and intolerance across the nation.

He issued a challenge to the graduates to be examples.

“But you won't be alone. If you stand, you'll find others standing with you.”

The ceremonies were livestreamed for graduates and their family members who could not attend. President John Nicklow applauded the graduates for persevering despite the unprecedented challenges.

“You have faced obstacles along the way. How do I know this? Because each of you has persevered through the extraordinary circumstances of a worldwide pandemic,” Nicklow said. “But with the help of your family, friends and supporters, you have succeeded and are prepared for whatever comes next.”

The graduating classes hailed from Louisiana and 39 other U.S. states and territories and 45 areas abroad.

Many of the graduates greeted the in-person ceremony with anticipatory glee and wore smiles before donning masks.

Alexus Day and Sophia Cerrone, who both earned bachelor’s degree in naval architecture and marine engineer, were among them.

“It’s very fulfilling to be able to graduate in person,” Day said. “It means the world.”

“It shows that my hard work paid off,” said Cerrone, who decorated her mortarboard with a quote from the movie, “Pirates of the Caribbean.”

“I did a quote that really embodied my experience here,” Cerrone said. “Complications arose, ensued and were finally overcome!”

Payton Lambert, who earned an elementary education degree in 2020, said she plans to share UNO’s livestreamed ceremony with her third grade class. She wore a colorfully decorated mortarboard that included the first names of her students surrounded by the quote: “Teaching Is Using all of the crayons in the BOX.”

“I wanted to be able to show my students … how important it is to really continue your education no matter what route you take,” Lambert said.

Some graduates said for them the day was a time of reflection as well as celebration.

Tyroy Lanus, a student-athlete who earned a bachelor’s degree in exercise physiology, said he felt “blessed.

“I appreciate God for giving me the opportunity to walk across stage,” Lanus said. “It’s a very emotional day for me.”

Veronica Cushman, a native of Los Angeles, stood near her former roommate and “best friend for life” Savannah Bilbo of New Orleans. The women, both English majors, met at UNO.

Cushman, who graduated in 2020, said the ceremony was an acknowledgement of her achievement.

“I’m the first in my family to get a bachelor’s degree and I’m a first-generation American, so it really means a lot. It means that I’ve completed the dream that my parents wanted for me,” Cushman said. “I came back specifically for this. I worked too hard … to NOT be here.”

Andrew Waldron, who earned his MBA in 2020, agreed.

“It’s special that we actually get to walk,” said Waldron, a 14-year veteran of the New Orleans Police Department. “Looking back, I don’t know how I did it but I think everybody does that and that’s what motivates us. We motivated each other and worked as a team. We all had our times, we all had our moments, and we all got through.”

Cushman’s mortarboard read: “I Have Passed Through Fire.”

Mortarboard messages expressed the momentous occasion for other graduates as well: “MD To Be,” “It’s a beautiful day to graduate,” and “Master Has Given Dobby a Diploma! Dobby is Free!”

When words were not enough, the day’s elation came out in a few dance moves across the stage and fist pumps in the air. And the graduates received hearty applause from the audience, punctuated with shouts of “Yay! “I see you! and “You did that!” 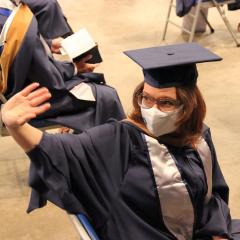 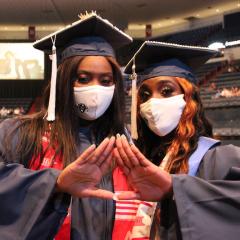 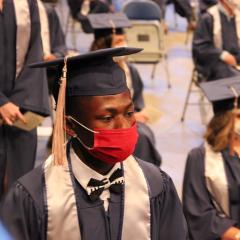 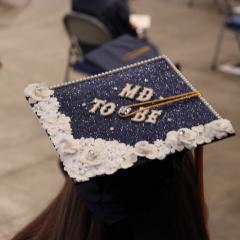 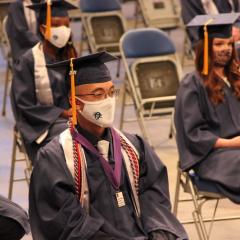 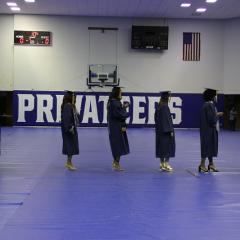 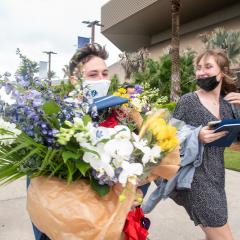 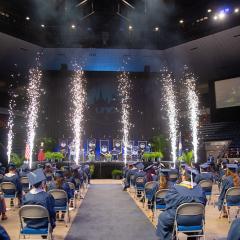 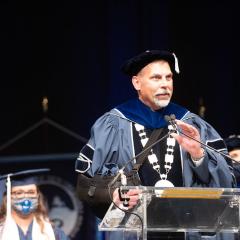 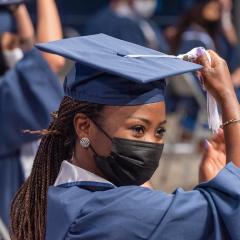 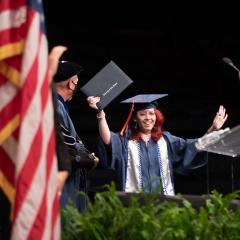 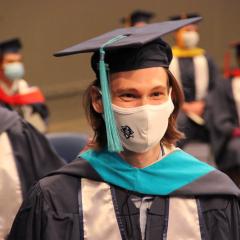