When an explosion ripped through the city of Beirut on Aug. 4, 2020, killing more than 200 people and destroying thousands of homes and buildings, Bechara was devastated.

The coronavirus pandemic had caused the cancelation of Bechara’s summer plans to study French at the American University in Beirut; otherwise she would have been there.

“I was already feeling very nostalgic and missing Lebanon a lot and then the explosion happened,” Bechara said. “I kind of had a meltdown and felt like I just needed to help in some way.”

Her father had immigrated to the U.S. as a young man and brought with him the knowledge to create flavorful Lebanese dishes, Bechara said. Having worked in the restaurant industry since she was a teenager, Bechara knows her way around the kitchen.

“I always hung out with my dad in the kitchen and whenever we’d go to Lebanon for the summer, I’d hang out with my grandmother,” Bechara said. “So I have a lot of experience in cooking Lebanese food.”

Bechara decided to put her skills to work and created a charity project called Le Beirut. The name comes from a popular song by Lebanese singer Fairuz called “Li Beirut.”

“It is just a really beautiful, sorrowful song,” Bechara said. “It’s always been an important song, especially so after the blast, so that’s why I chose that name.”

With the help of the owners of Turkey and the Wolf—the celebrated Irish Channel sandwich shop—Bechara hosted her first pop-up gourmet brunch a week after the explosion.

“I actually posted on Instagram ‘Does anyone have a restaurant to host a fundraiser?’ And Turkey and the Wolf reached out to me,” Bechara said. “We raised $4,000, which was amazing.”

She donated the proceeds to a nonprofit in Lebanon that focus of helping elderly residents and rebuilding homes destroyed in the explosion, Bechara said.

Another charity event followed with a local ice cream maker.

“I did two ice cream events, that was really fun,” Bechara said. “We sort of did nostalgic Lebanese ice cream flavors.”

In November, Bechara’ s charity and pop-up brunches earned her a feature story on Eater New Orleans, a food and dining website.

And while the COVID-19 pandemic has curbed her charity events, Bechara is looking for possible locations to host more brunches.

“I would like to figure out if I could do a weekly gig,” she said. “I don’t have the capacity to do more than once a week because of school.”

Eventually Bechara sees the project “morphing into more of a Lebanese bakery.”

“I like to do meat pies, spinach pies, baklava and other types of baked goods,” she said. “That’s what I’m most passionate about.”

Bechara’s charity work has also made her start considering other career paths. When she enrolled at UNO in 2019, she was looking to explore options in the wine industry in France. She is pursuing dual majors in French and international studies.

The American Journal of French Studies recognized Bechara last year for an essay “Ma Cousine Rima” about her experience as a Lebanese American. It was chosen as one of the top 20 submissions out of more than 1,000 for publication and recognition.

“Now what I see is working with refugees in Lebanon,” Bechara said. “So, if we could shoot for the stars, I’d love to work for the UN in Beirut.” 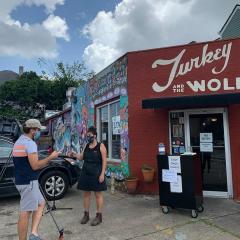