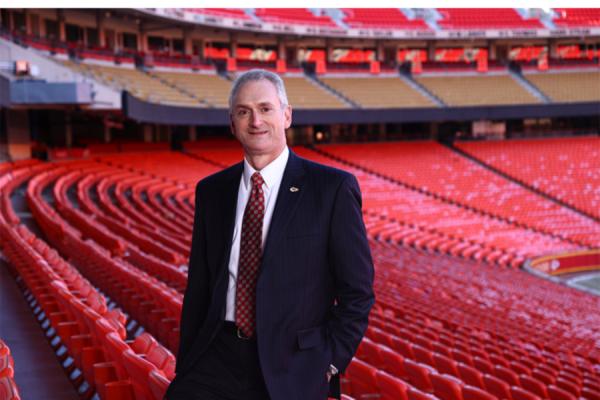 Dan Crumb is a numbers person. He recalls, as a youngster growing up in New Orleans, reading the financial pages of the newspaper with his dad and older brother.

“He would show us how to look at stock, at companies. He would buy stock and would buy stocks for us,” Crumb said. “It was really interesting to track them … I really felt this connection to operating a business and the financial aspects of it because of what he introduced me to at a very early age.”

Crumb knew a career in finance awaited him. He just never dreamed it would include a journey to the Super Bowl—and yes, a Super Bowl ring.

For the past decade Crumb, who holds a bachelor’s degree in finance from the University of New Orleans, has been the chief financial officer for the National Football League’s Kansas City Chiefs. The Chiefs are the defending world champions after defeating the San Francisco 49ers last year in Super Bowl LIV.

“I never dreamt about being in sports when I was in college or grad school, just because I didn’t even know how you got those jobs at that time,” Crumb said. “So for me to be able to be there and be a part of it, it was just a sensational experience.”

As the CFO, Crumb oversees the finance, IT and strategy and analytics departments. His finance staff is responsible for all financial reporting and analysis, cash management, budgeting and forecasting, Crumb said.

The IT staff is responsible for the safe, efficient flow of the organization’s electronic information both internally and externally, he said.

“A big responsibility of IT is to be the lead on innovation for our organization, that includes finding the most efficient and effective way of getting the work done,” he said. “Strategy and analytics is responsible for analyzing all of the data we collect across the organization and developing insights that we can use in developing our business strategy, also working with IT to find the most efficient ways to collect, store and retrieve data, and leading the effort for annual business planning.”

Crumb said he was able to parlay a solid education in finance and accounting and his prior experience as a CFO to become the Chiefs’ CFO.

“It helped me to be in the position for when the right opportunity arose,” Crumb said. “Also building a good network of professionals in the sports business and keeping in touch with them was important.”

Creating and building a professional network is top among Crumb’s advice to students. He was a member of UNO’s Finance Club, Crumb said.

“Make the most of your time in college. Choose a degree or course of study that aligns with your personal goals and the type of work you like to do,” he said. “But, I would say you have to be adaptable to change and embrace technology because things change and move very fast.”

Crumb, who graduated from UNO in 1987, said he was attracted to the University because the College of Business Administration has a strong reputation, especially in the area of finance and accounting.

“I knew that it would give me a really solid education at a very reasonable cost,” Crumb said.

With a bachelor’s degree in hand, Crumb proceeded to graduate school at Tulane University where he earned an MBA.

“I think a degree in finance gives you strong technical skill sets, but it also gives you a broad overview of how to run a business,” Crumb said. “I feel like I had a really good solid foundation with my UNO degree in finance and then I leveraged that to go on to grad school. I feel that it gave me the knowledge and skill to be a CFO.”

Crumb arrived in Kansas City by way of the New Orleans Hornets. He spent nearly four years as the CFO for the NBA team before being hired by the Chiefs. The Hornets post was his first foray into handling finances for a professional sports team.

Prior to joining the Hornets, Crumb was CFO at Abita Springs Bottling Company. The bottling plant was destroyed during Hurricane Katrina and the company was sold. A former colleague passed Crumb’s resume along to the Hornets, who were in the process of moving the franchise back to New Orleans from Oklahoma, where the team had relocated after Katrina.

There are some similarities working as the CFO for a professional football team and in a corporate setting, Crumb said. There is, however, a major difference.

“The biggest differences are the game day experience and interaction with your fans and corporate supporters, along with you are supporting the efforts of a pro football team competing for championships,” Crumb said.

“I’m privileged to work for the Hunt Family and the Kansas City Chiefs that have such a rich history in pro sports and I’m reminded of it every day I go to work in our facility. From seeing Arrowhead Stadium, our mission statement and photos of all the Chiefs players and coaches in the NFL Hall of Fame on the walls in our lobby to being able to look out of the windows in my office to see the team practicing.

"All of these things give me a strong connection to the team and its history and that I am so blessed to be part of this.”

When the Chiefs play at home (before the COVID-19 pandemic), Crumb typically walks the quarter-mile from his office to the outdoor stadium just to soak up the excitement of tailgating fans, he said. Arrowhead Stadium, per Guinness, holds the record for being the loudest outdoor stadium in the world, Crumb said.

“That passion is very apparent when you’re in our stadium. It’s a sea of red, just loud and having a great time,” he said. “To be a part of that is just really special.” 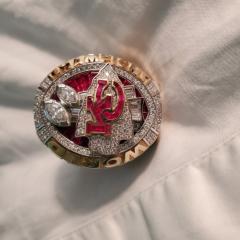 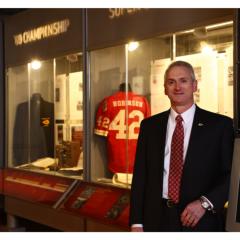