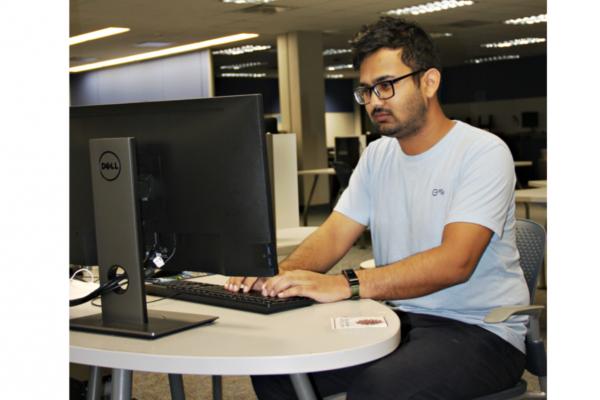 Rishav Rajendra, who graduated from the University of New Orleans in December, has been hired as a software engineer at Facebook.

Less than a month after graduating college with a degree in computer science, University of New Orleans student Rishav Rajendra will be starting his first job with one of the world’s most recognizable brands: Facebook.

Rajendra, who completed a 12-week internship with the company last summer, is headed to Menlo Park, Calif. to work at its headquarters. Because of COVID-19, Rajendra’s internship was performed remotely.

He starts work Jan. 4 and Rajendra said he’s excited about his position as a software engineer on the Facebook Watch team. Facebook Watch is a video-on-demand service.

“I mainly focus on streaming music videos, stuff like that,” he said. “If you go and search for a Taylor Swift song … I make sure that you find that video on top of the feed.”

Rajendra is also looking forward to the Facebook employee benefits, such as free lunches and dinners from on-site food courts and an on-site laundry delivery service.

“The campus is basically like, I would say, Disneyland for technical people,” Rajendra said with a laugh. “Everything is taken care of on campus. You get to work basically without anything else bothering you.”

Rajendra has been working with computers and programming since high school and finds computer science interesting because he said it allows “you the freedom and ability to do anything.”

At Facebook, Rajendra is looking forward to the exponential impact of his computer science capabilities.

“At Facebook anything I do affects millions of people, so the prospect of that is pretty exciting for me,” he said.

Rajendra, who is from Nepal, chose to attend UNO after hearing friends speak positively about the University and its computer science program.

“My favorite thing about UNO was the computer science department and the College of Sciences supporting undergraduates like me to get into research very early into my studies,” Rajendra said.

He was awarded a research assistant role under computer science professor Stephen G. Ware in his first year, which was supported by the College of Sciences Undergraduate Research Program funding, Rajendra said.

After that, he worked with computer science professor and department chair Mahdi Abdelguerfi at the Canizaro Livingston Gulf States Center for Environmental Informatics for two years.

“The research I was fortunate enough to be a part of at UNO provided a huge boost to my resume,” Rajendra said.

“(The) library gets very busy during the exams, so that was my secret favorite place to study,” he said.

Rajendra also was involved in activities outside of the classroom, such as the UNO Robotics Club; he competed in programming and coding contests.

He advises students not only to pay attention in class, but also to explore the benefits of extracurricular club activities.

“If there are no event or groups you are interested in, maybe form a new organization, or tilt an existing organization towards what you may want to do,” Rajendra said. “I introduced (computer vision and machine learning) to the UNO Robotics Club and now almost all teams in the club have fully adopted the method.”

“For a summer internship … the process is in its final stages in October. To even get a chance to interview, you need to start applying in August,” he said.

Rajendra said he applied for his summer 2020 Facebook internship in August 2019 and received a final offer in November of that year.

There are usually multiple rounds of technical and behavioral interviews, Rajendra said. The full process could take from one to three months, he said.

“Data structures and algorithms are the core fundamentals of the interviews,” Rajendra said. “Learn how to code under-pressure. As interviews are always time constrained, you may have to solve multiple problems.”