Actor Harry Shearer Shares the Irony of Life, Luck and Preparation in His Commencement Address at UNO’s Fall 2020 Virtual Ceremony 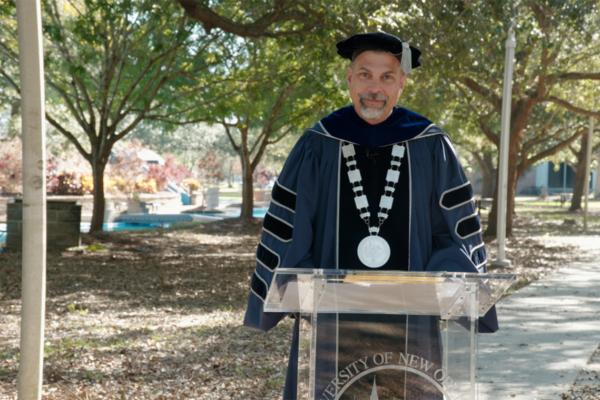 Approximately 970 students participated in the University of New Orleans’ fall 2020 virtual commencement presented on Dec. 12. The ceremony, which was streamed live on YouTube, included a roll call of graduates and a keynote address by actor Harry Shearer.

The ongoing COVID-19 pandemic required the change and President John Nicklow greeted graduates via video while standing on campus near the fountain at the Robert Merrick/Latter & Blum Patio.

The graduates represented 31 U.S. states and territories, as well as 24 countries.

“Today’s program marks the end of long years of rigorous academic training, and the beginning of a transition to a different chapter in your lives,” Nicklow said in his virtual address. “I want you to think for a moment about how different you are today than when you first arrived at the University of New Orleans … You now understand what I mean when I say that education is transformational.

“And yes, you’ve faced obstacles along the way, but with the help of your family, friends and supporters, you have succeeded and are prepared for whatever comes next.”

The program also included messages from UNO faculty members. Brian Seeger, professor of music, played a few bars of “Pomp and Circumstance” on his guitar before offering encouraging words while civil and environmental engineering professor Norma Jean Mattei’s opening salutation of ‘Hallelujah!’ punctuated what she deemed an “interesting road” to graduation.

He joked that the class of 2020 had been “gifted” with good news and bad news.

“The most ironic thing I can say to you today is congratulations … The good news is you’ve graduated,” Shearer said, then sighed and continued. “The bad news is—it’s 2020.”

Shearer said he could commiserate with the graduating class of 2020 who are exiting college in the middle of a global pandemic. When he finished college, the U.S. was embroiled in the war in Vietnam and uncertainty and turmoil clouded thoughts of the future.

However, it was during those post-undergraduate years—which included working for a state legislature and as a high school teacher in Compton, California—that he realized that what he wanted to do in life was to make people laugh, Shearer said.

Throughout his decades-long career, Shearer has appeared in films and television series including “This Is Spinal Tap” and “Saturday Night Live.” He has served as one of the principal voice actors on “The Simpsons” for the show’s entire 31-year run, voicing the role of Mr. Burns, Ned Flanders and 20 other characters. Shearer received a primetime Emmy Award for Outstanding Character Voice-Over Performance in 2014 for “The Simpsons.”

Shearer, who maintains a residence in New Orleans, is also the host of the radio program and podcast “Le Show,” which is distributed nationally by WWNO, the New Orleans public radio station on UNO’s campus.

He received an honorary doctorate from the University in recognition of his sustained excellence in a number of artistic endeavors and his longtime advocacy for New Orleans.

He displayed his unfettered affection for the city as he cheekily encouraged graduates to explore other cities like New York and Los Angeles and compare them to the soulful richness offered by New Orleans.

“Just being able to live in a place where the dollar is not the only measure of value, where culture starts in the home, in the street and then migrates to dens and clubs and concert halls and galleries; that’s given you a very distorted idea of the country you live in,” Shearer said.

Shearer advised the graduates to be aware that life will take some unexpected turns and that the path to success might be a more circuitous route.

“Life as it is actually lived is almost never a straight line,” he said.

For instance, Shearer said he worked for years on a one-man public radio show and often contemplated giving it up. Then luck met preparation.

“That semi-obscure show is how Matt Groening first heard of me,” Shearer said referring to the creator “The Simpsons.” “All that work for free, like a lot of the play we see children do, was nothing more nor less than learning to be ready when the lucky break, broke.”

He emphasized that while “luck” is important; it is not a free pass to avoid the hard work of learning and preparing.

“It’s just the opposite,” he said. “A stroke of luck when you’re not ready is a free Maserati when you don’t know how to drive … a free lifetime supply of sublime cooking ingredients when all you’ve ever done in a kitchen is boil water.”

In closing out his address, Shearer told graduates to be ready, “not to be ready.”

“Because despite the best efforts of everyone, from fortune tellers in Jackson Square to pollsters on TV, the future always defies our efforts to know it. That’s the bad news,” he said.

“The good news, the real news, congratulations ladies and gentlemen, it’s all yours and you are—” Shearer said as he paused to steeple his fingertips before continuing in the famed voice of “The Simpsons” character Mr. Burns, “excellent.”

The commencement ceremony has been archived online and can be viewed here.