University of New Orleans alumna Kd Amond, who earned an MFA in film production, has released her first feature movie, “Five Women in the End.”

University of New Orleans alumna Kd Amond, who earned an MFA in film production in 2012, has released her first feature film, “Five Women in the End.” The dark comedy, which Amond directed, co-wrote and co-produced, is now showing on Amazon Prime.

In a sign of the quickly-evolving film industry—it was shot completely on an iPhone.

The movie premiered at the 2019 Nashville Film Festival and garnered positive reviews. It also received a standing ovation from the audience after the festival showing.

“The most rewarding part to me, as a director, is seeing actors bringing my words to life,” said Amond, who lives in Nashville. “Fulfilling on a larger scale is when you actually see it at a theater on the big screen with an audience and people are laughing and clapping and having reactions to the materials. That’s nice.”

The movie takes place in a high-rise condominium in Nashville and revolves around five friends whose bi-monthly girls-night-in takes a dire turn after a chemical attack on the city.

The friends’ characters are based on five stereotypes of women that Amond recalled reading about years ago: the career girl, the girl’s girl, the guy’s girl, the domestic darling and the drama queen. The girls-night-in scenario is “loosely” based on Amond’s and her friends’ “Poor Choices Thursdays” gatherings in New Orleans, she said.

“The plot is basically I wanted to see what happens with those stereotype women when they’re in a situation where they have to face their own mortality,” Amond said. “Their only ties to the outside world is this little storm radio that one of their boyfriend’s brought over because he’s a doomsday prepper, ready to head for the hills, but he makes sure they have supplies before he left.”

The radio DJ, who ties the girls to the outside world, is played by Michael Cudlitz from “The Walking Dead,” ABC’s “The Kids’ Are Alright,” “Band of Brothers” and “Gross Pointe Blank.”

Cudlitz, who Amond had met previously through friends, happened to be in Nashville for a charity event while Amond was filming.

“So he was gracious enough to lend us his time,” Amond said.

The film, which was shot over an eight-day period in 2018, was Amond’s foray into shedding the “first-time movie director” tag.

Since graduating from UNO in 2012, Amond has worked on movie sets, such as “Best of Me,” “Terminator 5” and “The Big Short.” She has also directed short films, commercials and music videos.

However, she found the movie industry reluctant to take a chance on someone without a feature film credit—so she created the opportunity for herself.

“It became more of, ‘OK, let me just show you what I can do with very little, show that I’m capable of making a feature film,’” Amond said.

She filmed the movie using an iPhone, which Amond said has a camera sophisticated enough to capture images at the right speed, but small enough that it could have been taped to a wall to get a particular shot.

“If you’re willing to go through a little trial and error, you can shoot a really cool movie on a phone,” Amond said. “I’m of the mentality that we can lug around this heavy equipment and spend thousands in rental, or we can take the 4K camera that’s already in my pocket, put it on a gimbal and add some lenses to it and get just as cool of a picture.”

Amond grew up in the small town of Livingston, Louisiana and said she’s wanted to make films since she was 11.

“I grew up in the 90s and 2000s where there was a huge surge in independent films and Quentin Tarantino and the Coen brothers,” Amond said. “All those great movies that are mostly dialogue and I just loved it.”

One such pivotal film for her was the movie “Trainspotting,” starring Ewan McGregor as a heroin addict. Amond remembers being fascinated by the cinematic freedom of one scene.

“I was way too young to see it, kind of traumatized me,” Amond said laughing. “But there’s a scene where Ewan McGregor dives into a toilet and comes out into the ocean … and then comes back out through the toilet. I was like ‘Whoa! You can make anything happen in movies!’”

Amond chose to attend UNO to pursue her film career after earning a bachelor’s degree in English with a creative writing focus from LSU.

“It was still close to home and the industry was basically in Louisiana at the time,” Amond said. “UNO literally gave me my skillset. People are blown away that I can basically prep an independent film from budgeting to shooting.”

While Amond’s degree program was film production, she liked that the University didn’t require her to pick a focus, she said.

“I didn’t have to focus on just cinematography or just directing or just editing,” Amond said. “I got this very broad education.

“One of the things that UNO gave me was the ability to communicate with anyone in any department and speak the language, which I think is invaluable.”

UNO also gave her a “film family,” alumni who have helped her on numerous projects, including the grueling eight days spent filming “Five Women in the End,” Amond said.

“We basically shot six days and then we took two days off; and then we shot two more days,” she said. “That’s extremely quick.”

A typical Hollywood movie takes anywhere from six to 10 weeks, if not filmed with special effects, Amond said. A low-budget sci-fi or Lifetime-type movie schedule is typically 14 to 16 days, she said.

One of the female leads in “Five Women in the End,” is UNO alumna Nichole Lovince, who flew in from California for the filming; Christopher Martin drove from Los Angeles to be Amond’s gaffer; UNO professor James Roe, who graduated from UNO a year before Amond, created the visual effects; and alumnus Tim Connor was the sound recorder.

“It was a tight knit family, and it still is,” Amond said. “I don’t know if that sort of thing exists outside of the South.”

In 2019, Amond formed her own production company, AZ If Productions, with her business partner Sarah Zanotti. The two have completed two feature films and are working on a third project that they hope to start filming in March, Amond said.

“I love being the writer-director hyphenate,” she said. “I really love every aspect of storytelling.”

The three projects, which are of various staffing sizes and budgets, all originated from her production company and illustrate her broad skills to studio executives, she said.

“I’m about to have three features under my belt,” Amond said. “I’m building my own resume.” 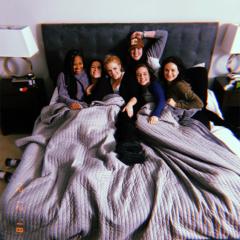 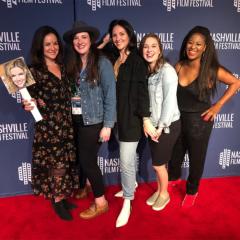 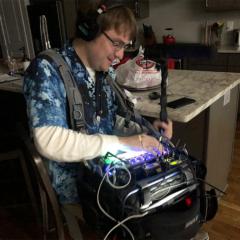 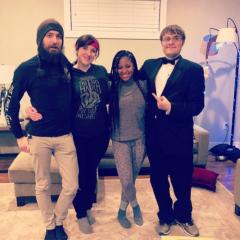