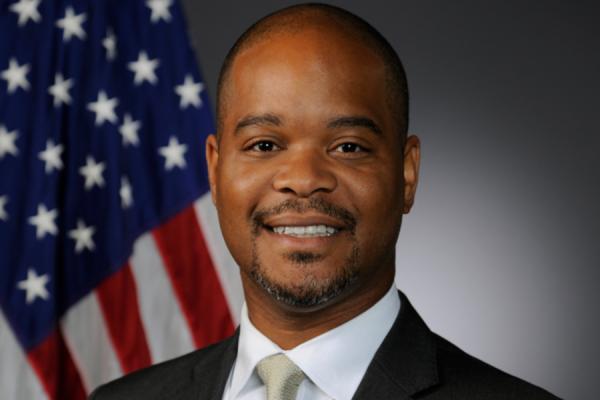 Mike Jackson, who holds a bachelor’s degree in mechanical engineering from UNO, earned the Air Force Civilian Achievement Award Medal for his work.

University of New Orleans alumnus Mike Jackson, who holds a bachelor’s degree in mechanical engineering, describes his UNO degree as the foundation of a career in which he has managed construction of multi-million dollar projects, including portions of the new VA center in downtown New Orleans.

Jackson is the construction technology subject matter expert for the U.S. Air Force and recently earned the Air Force Civilian Achievement Award medal for outstanding leadership and service. He has spent more than 18 years as a “federal civilian,” employed at agencies that includes Veterans Affairs, the U.S. Army Corps of Engineers and now the Air Force.

Jackson recalled his first job interview after graduating from UNO in 2001. It was with Exelon Nuclear and part of the interview included answering hypothetical situations in a power plant, he said.

“I was asked questions about a piping system and what would happen if various things happened, like closing a valve or sizing a pump,” Jackson said. “After answering the questions, the interviewer, who would subsequently be my supervisor, was amazed at my answers and asked, ‘How do you know all of this?’

“This was a clear indication to me that I learned a lot while I was at UNO,” Jackson said.

Jackson grew up in Baton Rouge and attended UNO on an academic scholarship.  He was a senior at Baton Rouge Magnet High when he decided on a college major with the help of a high school teacher impressed with his drafting skills.

“I took a drafting class during my senior year and the teacher asked me what I was going to major in. At the time, I didn't know,” Jackson said. “He suggested mechanical engineering.”

Jackson chose UNO because it was close to home and the school’s engineering program had an excellent reputation, he said.

“My fondest memories of UNO are living in Bienville Hall, being one of the first residents of Privateer Place, hanging out at the Cove, the UC, and the SUCbAUF,” Jackson said. “Although UNO was considered a ‘commuter" school,’ I was able to form some of the most solid friendships with folks I met at UNO. To this day, I've been able to maintain relationships with most of the friends I made at UNO.”

While attending UNO, Jackson was a co-op student with the US Army Corps of Engineers New Orleans District. Immediately after graduation, he worked as an engineer in the nuclear industry. However, most of his professional experience has been as a federal civil service employee.

Notably, during his 12 years with the Department of Veterans Affairs, he was one of the resident engineers managing the construction of the $1 billion VA New Orleans Medical Center project. He was the lead engineer for the $90 million inpatient building, Jackson said.

His work was recognized by Air Force leadership and resulted in the presentation of the Civilian Achievement Medal Award, which recognizes outstanding achievement and meritorious service.

Jackson, who lives in San Antonio, said being a civilian working for the military took a bit of an adjustment.

“One thing that immediately stands out is that the military is a rank-centric organization,” Jackson said.

Although he worked at the Army Corps of Engineers while attending UNO, Jackson said he had limited interaction with people outside of his division and didn't see as many active duty military service members as he does now working at the Air Force.

“I had to learn various ranks and what rank typically holds various positions that my job interacts with,” he said. “Other than on-the-job learning, I've also taken steps to complete Professional Military Education as a civilian to bridge the learning gaps.”

“Working for the Air Force has been a very rewarding yet humbling experience,” Jackson said. “It takes a while to get used to the military culture, its acronyms, and organizational structure. Once that's accomplished, the sky is the limit and you can really appreciate how what you bring to the fight is valued.”

“I've been fortunate in that my background and experience has allowed me to progress through the Air Force in positions that align with my BS in mechanical engineering from UNO.”