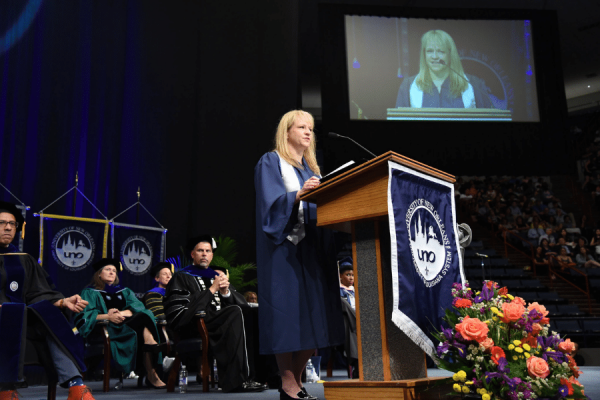 UNO alumna and Google vice president Sabrina Farmer has donated $250K to her alma mater. In May 2018, she delivered the spring commencement address.

A $250,000 gift from alumna and Google vice president Sabrina Farmer will fund a computer science scholarship and support for the College of Sciences at the University of New Orleans.

Farmer, who earned her undergraduate degree in computer science from UNO, is vice president of engineering site reliability for many of Google’s billion-customer products such as Gmail, Search, Google Maps, Android and Chrome. She also oversees reliability of product infrastructure, including Google’s authentication, identity and abuse systems.

Her gift will establish the Sabrina D. Farmer Endowed Scholarship in Computer Science as well as support academic programs, research programs, and classroom and lab enhancements in the College of Sciences.

The Marrero, La. native and her three sisters were raised by a single mother who worked as a legal secretary. Farmer said she had no intention of going to college until she accompanied a high school classmate to UNO’s campus so that he could sign up for classes at the University. She said she left campus realizing that she wanted to enroll as well.

“I regularly reflect on that girl who went into the University Center that day with no real aspirations and I want UNO to do that for others,” Farmer said. “I want other people to have that opportunity and I thank UNO. I am forever grateful for it and I want it to be there for others.”

Farmer is a longtime supporter of her alma mater and an advocate for women in technology. A year after she graduated from UNO and moved to Silicon Valley, she created a computer science scholarship administered by the UNO’s Women’s Center, which provides both financial support and regular mentorship from Farmer to recipients. She has also sponsored travel grants for female technology students to attend conferences. Throughout her career, she has worked to advance women's careers and make the high-tech work environment more inclusive and flexible.

“Sabrina’s experience speaks to the mission of UNO to provide access and support to students and set them on a path to a successful career,” President John Nicklow said. “Her support for students over many years, which began soon after she graduated, serves as an incredible inspiration to all of our alumni and partners. I am so grateful for her passion and support.”