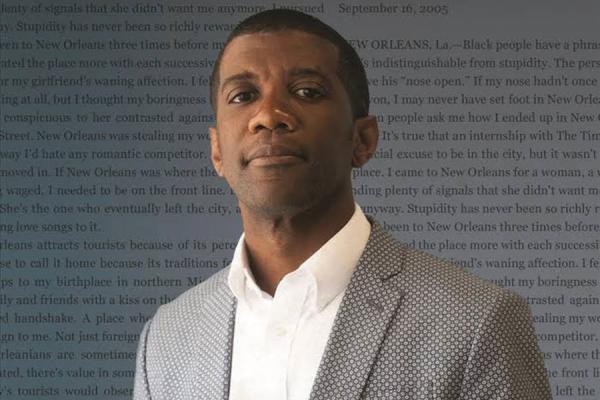 Columnist Jarvis DeBerry chronicles the city of New Orleans in his new book, “I Feel To Believe,” released Thursday by the UNO Press.

Many of those columns are compiled in DeBerry’s new book, “I Feel To Believe,” published by the UNO Press and released Thursday. The columns span DeBerry’s time, starting in 1999, as an editorial writer and columnist at NOLA.com/The Times-Picayune.

“For readers interested in a first-hand account of the fluctuating culture of New Orleans from the late 1990s to the mid-2010s, DeBerry’s columns offer a boldly-rendered perspective, playing witness to a city that is rooted in its traditions and yet undeniably privy to change,” Himelstein said.

“‘I Feel To Believe’ is all at once an accounting, a reckoning, a celebration.”

It documents two decades of constancy and upheaval, loss, racial injustice and class strife. Generations from now, DeBerry’s readers will receive a deep look at the Crescent City before, during and after Katrina, Himelstein said.

“Every great city has its truth tellers, and Jarvis DeBerry is one of the finest that New Orleanians—including those who claim her by sheer love—could hope to read,” said Dean Baquet, executive editor of The New York Times and a native New Orleanian.

DeBerry worked for The Times-Picayune newspaper in New Orleans from 1997 to 2019, first as a reporter, then as an editorial writer and columnist for NOLA.com | The Times-Picayune. He was part of the team of journalists awarded the Pulitzer Prize for Public Service for its coverage of Hurricane Katrina and its aftermath.

DeBerry is a five-time winner in the annual contest sponsored by the Louisiana/Mississippi Associated Press Managing Editors Association, as well as a two-time winner of the National Association of Black Journalists’ Salute to Excellence Award.