$250,000 Gift from Tom and Connie Kitchen to Establish Undergraduate Scholarship at UNO 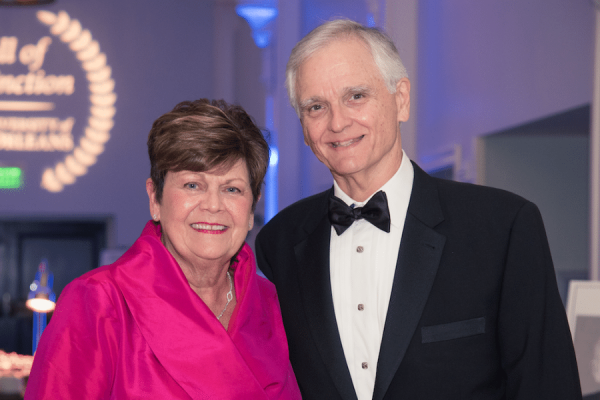 A $250,000 gift from alumni Tom and Connie Kitchen will create an undergraduate scholarship at the University of New Orleans. Tom Kitchen, a former executive with Stewart Enterprises and Avondale Industries, earned both a bachelor’s degree in accounting and an MBA from UNO. Connie Kitchen obtained a bachelor’s degree in education from UNO. The donation will establish the Kitchen Family Undergraduate Scholarship.

“I have been blessed in my career and, when I view what I have done in relation to what UNO cost, I realize that I have benefitted immensely both personally and professionally from my UNO education,” Tom Kitchen said. “Our financial support is our recognition of this and some attempt to repay the school for everything it has done for us.”

Tom Kitchen retired as president and CEO of Stewart Enterprises Inc., the second largest provider of funeral services and products in the U.S. He led the team in negotiating the merger with its largest competitor, Service Corporation International. He previously spent nearly 24 years in various executive roles with Avondale Industries Inc., a marine construction and repair company based in New Orleans. He served as president of the company before retiring in 2002.

“I am so grateful for the generous support of Tom and Connie and the positive impact they have had on our university,” said UNO President John Nicklow. “Education is transformational, and, through this gift, they are transforming future students’ lives. Their ‘pay it forward’ attitude is exemplary, and I hope others will follow their lead.”

Tom Kitchen is active in a number of nonprofit organizations, including serving on the University of Louisiana System Board of Supervisors, the Jesuit High School Board of Directors and President’s Advisory Council, and the Catholic Charities Archdiocese of New Orleans Finance Committee. He previously served on the UNO Foundation Board.

“We hope our contributions to our family scholarship fund will enable a current or future UNO student to realize their dream of becoming a college graduate and do so without incurring a significant amount of student debt,” Kitchen said. “Maybe this student will recognize later that they were the beneficiary of this scholarship and at the appropriate point in their life, make a similar contribution, which will enable future generations to benefit from a UNO education.”