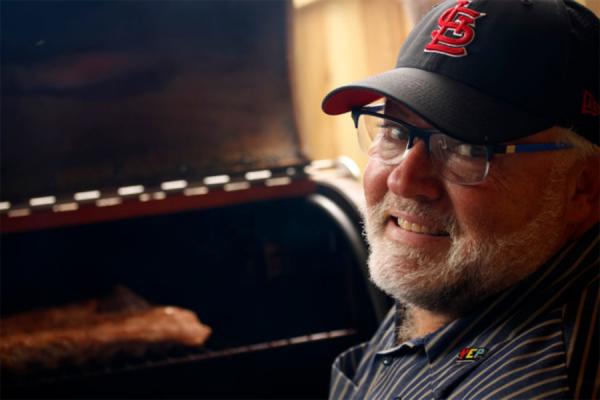 Scot Craig can talk about life’s storms and setbacks. His experiences could fill a book, he said. However, the University of New Orleans alumnus who owns the beloved Mid-City eatery Katie’s Restaurant, prefers to concentrate on the triumphs—the how of getting through challenging times.

He calls it “personal focus.” For Craig, the success of Katie’s is the manifestation of that phrase—even  during the COVID-19 pandemic, which has caused some businesses to close their doors.

“From day one we’ve had this, ‘We’re not quitting’ attitude,” said Craig. “All of us, the whole team, and it’s been extremely beneficial to being able to survive so far.”

After state and local mandates prohibited inside dining in an effort to slow the spread of the coronavirus, Craig immediately adopted a new strategy.

“I just decided, `Hey I’m going to make my wait staff delivery drivers’,” he said. “Thinking that the customers who come in the restaurant like to see certain waiters or waitresses, so I’ll just get them to bring it to the customers.”

Craig, who also owns the Lakeview deli, Francesca, with his wife, Stephanie, set up tents for outside dining at both restaurants.

“The teams that I have at the restaurants, they were all in when this went down. Nobody left, nobody quit on us,” said Craig. “It’s all about working together and having the momentum from never closing.”

He didn’t always have the focus that has allowed him to weather the on-going coronavirus pandemic, Craig said. That focus came courtesy of another storm named Katrina.

He enrolled at the University of New Orleans, joined a fraternity and fell in love with the Privateer community, Craig said. It was the 1980s and the campus was beehive active.

“Intramural sports were incredible, we had so much fun,” Craig said. “All of the fields next to the HPC on Friday afternoons were just full of people playing football. Those are just great memories.

“I got to take classes with Dr. (Stephen) Ambrose! He was incredible, talk about a phenomenal professor!”

Craig earned a history degree from UNO in 1987 with plans to attend law school. Then, in 1989, he bought a bar.

“My thoughts of going to law school were quickly extinguished when I bought the bar and got into owning my own business,” Craig said. “It’s one of the best ‘bad’ decisions I ever made.”

Craig had worked as a bartender for years and was a general manager at a bar and restaurant called Bart’s On the Lake when he decided to purchase his first business.

Having a love for cooking and a knack for managing food cultivated as a general manager, Craig was looking to return to the food industry. That desire led him to buy Katie’s in 1993. There he started to hone his culinary skills and expand his knowledge of the restaurant business, Craig said.

He grew up in a diverse New Orleans neighborhood with different cultures that allowed him to explore that diversity through culinary dishes, Craig said.

“I worked with a lot of great people and I’ve learned from them. Katie’s is what it is today, which is an absolute incredible transformation post-Katrina,” he said.

The popular restaurant features Craig’s take on many New Orleans staples, such as Redfish NOLA, chargrilled oysters, barbecue shrimp and grits, as well as pizzas, burgers and po-boys.

“That’s a big UNO item for sure,” Craig said.

“I want to help my school in any way I can,” Craig said.

In 2005, Hurricane Katrina ripped off the roof and inundated Katie’s with 7 feet of water. The destruction seemingly buried Craig’s restaurant dreams under a wreckage of the once thriving eatery. His insurance coverage was not enough to cover the extensive repairs.

Craig was in Little Rock, Arkansas when CNN called looking for a chef. The cable news network was opening a bureau in New Orleans to cover the storm’s aftermath and needed someone to cook meals for around 150 people. A friend recommended Craig.

“I got to cook anything that I wanted; they didn’t care,” Craig said. “It was a great learning experience for me because I was just doing what I loved and taking care of these people.”

When Craig realized that his kitchen would be closed by the time many of the reporters and producers returned to the bureau, he took the meals to them.

“I started going out to the sites and set up a table and served them on site,” Craig said. “The extra effort I gave them in that regards turned a three-month contract into a year-and-a-half.”

During this time, Katie’s was shuttered. Craig, however, was undergoing a personal transformation, he said. He was finding a level of personal satisfaction, confidence and a personal focus, that allowed him to accept being called chef although he was not “traditionally trained” in a culinary school, Craig said.

“I started being comfortable with people calling me chef and so suddenly I became a chef,” he said.

“My whole life sort of evolved into a different person, what I feel is a very good person,” Craig said. “I believe in giving. I believe in doing things for the city ... for the people of our city. It just was a transformation for me that just has changed my life.”

That personal transformation extended to the reopening of Katie’s in 2010 with a focus on quality service and good food that consistently has earned Craig and the restaurant rave reviews locally and nationally.

And to anyone looking to replicate his success Craig offers this advice, “Do what you love, focus on it and get it done!”