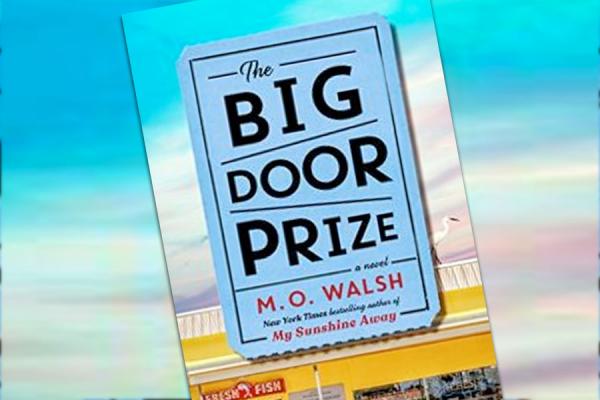 M.O. Walsh, director of the University of New Orleans Creative Writing Workshop, has published his highly anticipated second novel, “The Big Door Prize.” He struck literary gold in 2015 with his debut novel, “My Sunshine Away,” which made The New York Times bestseller list.

His second novel has garnered early praise with starred reviews from Publisher’s Weekly and Booklist. The Atlanta Journal Constitution also named it one of the most anticipated Southern books of the fall.

Readers might also see the characters and storyline playout on television.

“The book has also been optioned for television by Skydance Media, with David West Read (Schitt’s Creek) as the writer,” Walsh said. “So, fingers crossed that works out!”

The book is set in the small fictional town of Deerfield, La., the type of town where “everybody knows everybody,” Walsh said.

The novel starts with the arrival of a strange new machine at the local grocery story that looks like a photo booth. However, the machine claims that it can tell a person what their utmost potential would be by analyzing their DNA.

“So, people who have been construction workers for the last 20 years might get a readout from this machine saying they would actually be a really great chef or tennis player or accountant, if they pursued it,” Walsh said.

“The more people try the machine, the more the town gets engrossed with it as people start trying out some strange new paths.”

Among those trying out the machine is the novel’s main couple, Douglas and Cherilyn, who get very different readouts that makes them question if they are truly as happy as they’d thought, Walsh said.

“This is not a sci fi novel. It’s a more humorous and heartfelt look at people and how they square themselves with their dreams,” Walsh said. “I think a lot of us are doing this now, in fact, since we’ve been quarantined or lost our jobs this year.

“It’s like we’re all looking around, thinking: ‘Is this who I want to be? How did it get this way? Is this a chance for me to change? And, if so, do I want to?’”

Walsh takes the title of his book from a line in the John Prine song, “In Spite of Ourselves” that goes:

In spite of ourselves/we’ll end up sitting on a rainbow/Against all odds, honey/We’re the big door prize.”

“It’s a great and funny love song about a couple realizing that, although they are both flawed and strange, they have each other, and that’s the best thing they could ask for in life,” Walsh said.

Walsh will have a virtual book release event through Octavia Books on Sept. 8 at 7 p.m. where he’ll be interviewed by Danial Wallace, the author of “Big Fish.”

The novel officially comes out next week, but is available for pre-order now from any bookstore.

“A great way to order it is through Bookshop.org which allows you to order books from any independent bookstore you choose,” Walsh said. “This is a good way to help out the brick and mortar stores that are having a hard time right now in the pandemic.”