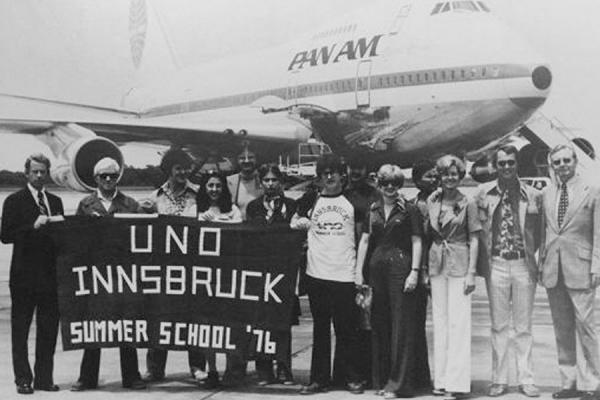 Students, faculty and administrators pose for a picture in 1976 before boarding the airplane for that inaugural summer session in Innsbruck, Austria.

EDITOR’S NOTE: The University of New Orleans canceled all 2020 summer study abroad programs due to the COVID-19 pandemic.

In 1976, the inaugural class of what would become the University of New Orleans’ flagship study abroad program, stood on an airport tarmac—in front of the airplane they would soon board—and posed for posterity. Given the dramatic changes in airport security, it is fair to say replicating that photographic feat is unlikely.

UNO administrators, however, have duplicated the quality study experience of that first year, as evidenced by the 10,528 students who have participated in the UNO-Innsbruck International Summer School in Austria since 1976.

This summer, the program turns 45 years old. As further proof of the program’s success and popularity, the 275 available slots were filled in less than two weeks during the spring.

“We attribute it to the way the program is run so well,” said Alea Cot, assistant provost and director of international education. “It’s known for its quality.”

Based on feedback surveys, students also appreciate the broadness of the program, which offers up to 40 classes in multiple discipline areas, including business, history, political science, and fine arts, Cot said.

There are also guided group field trips to nearby countries, such as visiting the BMW car factory in Munich, Germany; exploring castles in Bavaria, Germany or touring the archeological museum in Bolzano, Italy.

“Study abroad is very much a value-added part of their undergraduate UNO experience,” Cot said. “Yes, it’s going to cost money to invest, but the dividends that you reap continues long after you return home. You reflect more and more about how you’ve grown and what you’ve learned, and how you want to do it again!”

UNO alumna Jaclyn Wagers can attest to that sentiment. She participated in the program in 2015 and 2018. Her mother, also an UNO alumna, studied at Innsbruck in the 1980s, Wagers said.

“She always shared such good memories of it,” Wagers said.

Now, Wagers has her own stories to tell.

“Innsbruck is amazing,” she said. “The city itself is beautiful; there’s a river that flows through it and mountains are all around it.”

UNO-Innsbruck is the University’s largest and oldest study abroad program.

Students live in a dormitory at the University of Innsbruck. The central location of Innsbruck, in the heart of Europe, offers easy access to many other countries, such as Italy, Switzerland and France.

In 1979, the UNO history department offered a graduate fellowship to Günter Bischof, the first Innsbruck degree-seeking student at UNO. By 1982, the two universities were conducting joint symposia and exchange programs.

An official partnership treaty was signed in 1983 and still governs their relationship. Today, approximately 40 students from University of Innsbruck study at UNO each year.

Irene Ziegler, the program director, arrived at UNO in 1992 from Austria as an exchange student. She met her husband, a fellow UNO student, in New Orleans and later returned to live and work in the city.

“I can share my home country and my culture with our students,” Ziegler said. “It’s really special.”

There are three main reasons why Ziegler thinks the study abroad program is important: academics, international experience and independent travel.

During the six-week program, students are in class with Austrian students, sharing and hearing different perspectives in an international setting, she said. Classes are held Monday through Thursday, and students can earn up to nine credit hours.

The three-day weekends allow students to plan their own travel excursions, Ziegler said.

“A lot of learning takes place doing that as well because they are on their own and they have to figure out their trips, figure out what to do when a train strike happens or a plane is delayed,” Ziegler said. “A lot of students really like the program because of that independent travel opportunity they have.”

“I tried to go somewhere every weekend,” she said.

“I was very fortunate to have found some good scholarships that help pay for a majority of my trip,” she said. “There are more organizations than not that really want to see young people studying abroad, and I was lucky enough to find that.”

Wagers’ advice to students looking to participate in the study abroad program is simple.

“Say yes to every opportunity,” she said. “I tried to go on every field trip they offered … Go to the lectures, they are very interesting. There were some required lectures that I wasn’t interested in, but I left happy that I went because I learned so much good information.” 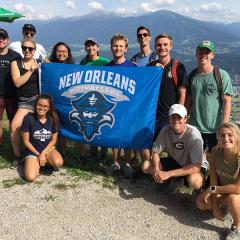 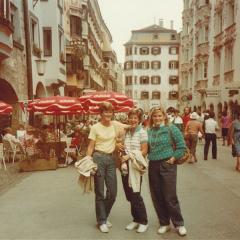 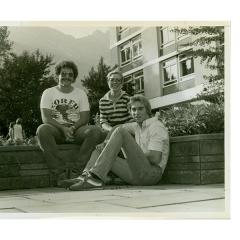 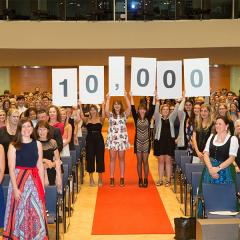 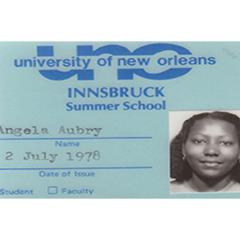 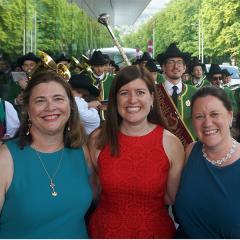