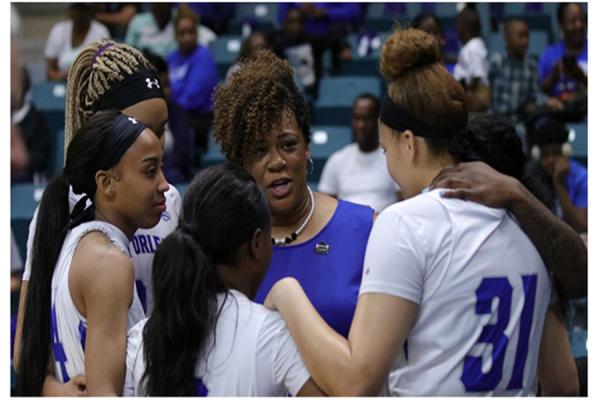 New Orleans head women's basketball coach Keeshawn Davenport was selected as the 2020 winner of the Eddie Robinson Award, made official by the Greater New Orleans Sports Awards Committee and the Allstate Sugar Bowl on Tuesday.

The Eddie Robinson Award, named after the Grambling football coaching legend, is presented annually by the Greater New Orleans Sports Committee to an individual in the state of Louisiana who has demonstrated the qualities most associated with Coach Robinson: outstanding achievement in athletics, academics, sportsmanship, and citizenship by maximizing the use of limited resources.

"I was totally shocked!" Davenport said when reflecting on getting the call informing her that she won the award. "I definitely didn't think that is what the call was going to be about! My emotions quickly went from shock to this is unbelievable."

"I've said it several times and I mean it from my heart," she added. "To hear my name mentioned in the same sentence as Eddie Robinson is just humbling. I'm an ordinary person receiving an award name after an extraordinary person/coach in Eddie Robinson!"

Davenport was the deserving selection after she wrapped up her ninth season as the head of her alma mater as her team experienced a record-breaking year both on and off the court.

On the hardwood, Davenport led the Privateers to their most wins since 1992-93 as the team recorded a 17-12 record. Included in that mark were 12 Southland victories, the most conference wins for the squad in school history. New Orleans earned the No. 5 seed in the Southland Conference Tournament as the group was set to go on a run before the postseason was canceled minutes before their opening-round game due to the outbreak of COVID-19.

While the success on the court is impressive, it was what the Privateers accomplished off the court that really stood out. Davenport, an all-academic selection back in her playing days, saw her team record a 3.168 GPA as a unit during the spring semester. To go with the success in the classroom, the Privateers really made their mark with their work in the New Orleans community.

The program ranked third in the nation and tops in the conference in the 2020 NCAA Team Workers Helper Community Service Competition out of all NCAA Division I Women's Basketball programs. Through involvement with organizations such as Second Harvest Food Bank, Einstein Charter Schools, and Children's Hospital, just to name a few, the Privateers recorded 532 hours of community service during the year.

"We are the only school in the city that wears our city name across our chest," Davenport said. "It's important to not just wear it across our chest but have the city in our hearts. I'm a firm believer that we are blessed to be a blessing to others. It's not about what our city can do for us but what we can do for our great city."

The Privateers have turned into a mainstay in the Southland Conference Tournament but their recent success is one that Davenport has strived for since turning around the program from one of their darkest times in school history.

When Davenport took the helm of the program in 2011, the athletic department was on life support. After a decision to drop from NCAA Division I to Division III, followed by a change in course to return to Division I status, the Privateers were in limbo and without a conference to play in.

Davenport took on the challenge head-on and started to transform the program. After opening her tenure with just three scholarship players and navigating the team through winless seasons, Davenport has established a winning culture again with the UNO program. In short time, Davenport took a team without a conference or a full roster and transformed it into one that has advanced to the Southland Tournament in each of the past four seasons.

"When I took over the program we were going through a transition," Davenport reflected. "Those years were tough but I never looked at it as the end. We may not have had the budget but we did the best with what we had."

"And I am not one to make excuses," she added. "If I have lemons, my job is to make lemonade. So my first few years, I made lemonade. It was a sugar-free lemonade, a little tangy, but we had something to drink. Now, the program is at a place where I now have some lemons and sugar, things are a little sweeter now. We are headed for a championship and when that happens that will be the ice in the lemonade that once started off with no sugar!"