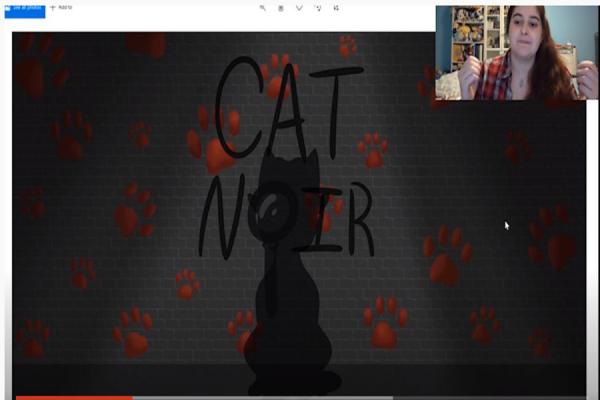 If you are into video gaming, you might well come across several new games developed by University of New Orleans students.

The Advanced Game Development class at UNO, under the direction of digital arts and animation professor Dan Rule and computer science professor Ben Samuel, presented their capstone creations on Wednesday via Zoom video conferences to friends, family and representatives from video game companies.

The culminating projects mirror the practices and methodology of professional game studios condensed into one semester, Rule said.

The students could market their games to video game companies or they might opt to self-publish their games, Samuel said.

"There are myriad options for self publishing these days that some of the students have expressed interest in," Samuel said.

The teams have posted YouTube videos that offer a behind-the-scenes look at how the student artists and developers created three new games.

One of the games, “Cat Noir,” is a puzzle-based mystery game starring a feline detective. Players navigate through levels to try to solve a murder, according to project leader Kelsey Tomlinson.

Another game, “Tarrow,” is a single player game in which the player attempts to climb to the top of a landscape by shooting arrows. Those landscapes—or worlds—include outer space, mountains and a futuristic city.

“After you shoot your arrow, you will teleport wherever it lands,” project leader Rocco Summa said. “Be it on the platform you were aiming for or a wall which spells doom.”

The third game, “Quadris,” is a clock racer that requires players to find and match four objects.

“It’s the idea of evolution and merging this into bigger things,” project leader Leigh VanCleef explained. “That was very well illustrated by our artists and very well put together by our developers.”

You can watch a trailer for the “Quadris” game below.

To get the full presentation on the three games, you can click Cat Noir, Tarrow, and  Quadris.