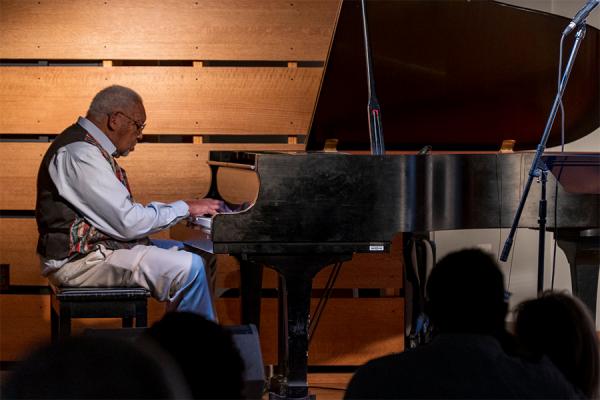 Ellis Marsalis plays at Jazz at the Sandbar at The Cove on UNO’s campus on Oct. 2, 2019. Marsalis established the music series in 1990.

“I’ll remember him as a friend and as a mentor, but also as this monumental figure in the world of jazz,” UNO music professor Steve Masakowski said. “There’s really no place on the planet you can go and not know the name Marsalis, and he’s responsible for that. He had such a great impact on music and music education and so he’ll never be forgotten.”

Masakowski, who met Marsalis in the early 1980s when both were playing a nightclub gig, was recruited to UNO by Marsalis in 1989 to teach guitar “and whatever else needed to be done,” in the newly created program.

During his 12-year tenure as the first chair of the University’s jazz studies program, Marsalis is credited with establishing an influential program with a reputation as the best place to study jazz.

Shortly after starting at UNO, Marsalis launched the “Jazz at the Sandbar” series to provide UNO students opportunities to gain live performance experience alongside seasoned professionals.

Thirty years later, the on-campus tradition continues. It is presented each Wednesday night for eight weeks during the fall and spring semesters and features a different renowned jazz artist guest who performs with UNO music students.

Marsalis retired from the University in 2001 but has always returned to open the “Jazz at the Sandbar” fall series. He played most recently on Oct. 2, 2019.

“That was a tradition started to honor his contributions to UNO,” Masakowski said regarding Marsalis’ customary opening night gig. “I think it’s important for people to celebrate the amazing life that he had and the success he had. He will always be remembered and looked up to and that legacy will live on.”

Marsalis, who was born in New Orleans, cultivated a music and education career that spanned nearly seven decades. He earned a bachelor’s degree in music education from Dillard University and a master’s from Loyola University.

He was a frequent performer who played a variety of New Orleans venues and taught music at public and private high schools, including the New Orleans Center for Creative Arts.

“Ellis Marsalis was a legend. He was the prototype of what we mean when we talk about New Orleans jazz,” New Orleans Mayor LaToya Cantrell said in a statement. “The love and the prayers of all of our people go out to his family, and to all of those whose lives he touched.”

Marsalis and his late wife, Delores, had six sons. Marsalis’ musical influence was highlighted beyond the New Orleans jazz scene as the world discovered the musical talents of four of those sons:

Wynton, a Pulitzer- and Grammy-winning trumpeter, is artistic director of jazz at New York’s Lincoln Center. Branford, a saxophonist, has won three Grammies, led The Tonight Show band and toured with Sting. Delfeayo, a trombonist, is a prominent recording producer and performer. And Jason, a percussionist, has made a name for himself with his own band and as an accompanist.

“It was really the success of his sons that eventually propelled him to the  notoriety that he got as an educator because he influenced so many of the most prominent jazz musicians in the world,” said Masakowski, who holds the Coca-Cola Endowed Chair of Jazz Studies, a title first held by Marsalis. “(He is) the epitome of what we think of in terms of jazz education.”