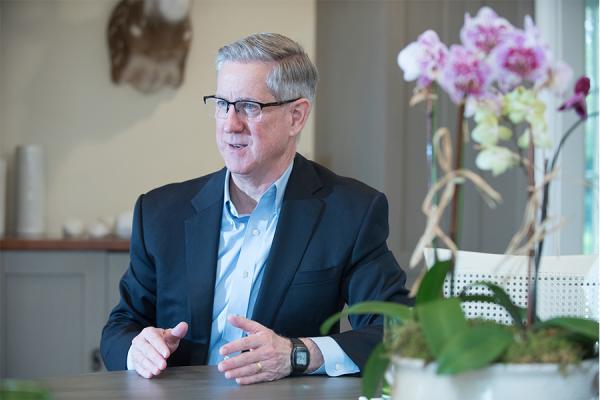 Perhaps it’s apropos that one of New Orleans’ premier political pundits, Clarence James DuBos III, has a nickname that is the last name of an infamous Jefferson Parish politician: Clancy. Just as befitting is that DuBos’ dog—a schnoodle named Teddy Roosevelt—has created his own reporting gig.

From his favorite perch on a living room sofa, it is Teddy’s face peering outside that a visitor sees first. He likes to sit in the window and keep an eye on the comings and goings in his Lakeshore neighborhood, DuBos said.

DuBos, who earned a bachelor’s degree in history from the University of New Orleans, loves politics.

He is a political analyst for WWL-TV in New Orleans, and is the political editor and columnist at Gambit, the weekly newspaper he and his wife, Margo, owned for 27 years. He is a former politics reporter for The Times-Picayune and WDSU-TV.

During election season, DuBos is a sought-after voice to opine about candidates, the nature of political races, voter turnout or other political issues.

“I live for telling people the big picture,” DuBos said. “My UNO history degree is something I use every time I sit down and write a column because I try to put things into historical context.”

DuBos’ career has spanned the manual typewriter era of print journalism, broadcast television before cable news and now the digital media age. He still recalls the early career advice given to him by a former UNO professor.

“He said, ‘remember journalism is the front line of history,’” DuBos said. “That was putting a responsibility on me. I try to think about somebody 10, 20, even 100 years from now, reading what I’ve written and make sure I get it right and put it into context.”

DuBos credits a long list of mentors with helping his journalism career evolve from a fledging newspaper intern assigned to rewrite news releases into the seasoned political journalist who can craft analytical columns that deconstruct complex issue, and who can deliver succinct political commentaries on the nightly TV news.

“I was taught by people who were doing it,” DuBos said. “My print training and my TV training was on the job.”

His reporting career has allowed him to witness firsthand some of the city’s defining news moments: Reporting from the scene of the 1973 Upstairs Lounge fire with its multiple deaths; covering the administration of Dutch Morial, New Orleans first African American mayor; and advocating for New Orleans’ recovery in the national news media in the aftermath of Hurricane Katrina.

“People ask me how did you get to be where you are, and I say well, I’m kind of a real life Forrest Gump,” DuBos said with a laugh. “I was just dum de dum, going through life, and I happened to be here, that’s how I feel. I didn’t script it. I just got really, really lucky. I’ve lived a charmed life.”

A few incidents in DuBos’s career lead him to jokingly compare his professional opportunities with the fabled Forrest who just happened to be an unwitting participant in many iconic and historical events, such as reporting the Watergate break-in and influencing Elvis’ swivel hip dance moves.

Chief among them is how DuBos was able to parlay what was supposed to be a six-week college internship at The Times-Picayune into a full-time job that lasted throughout college and for years after he graduated.

DuBos is amazed that he—with very little journalism experience at the time—was even hired as an intern.

DuBos was working part-time for photographer Ralph Romaguera who owned a photography studio and tuxedo rental shop in New Orleans East. It was Romaguera who encouraged him to apply to the newspaper.

Romaguera knew DuBos from the summer journalism workshops that Romaguera conducted at UNO. DuBos attended the two-week sessions each year as a student at Holy Cross High School.

By the end of his internship, DuBos knew he had found his professional calling. He had fallen hard for journalism and loved the adrenaline rush brought on by breaking news and seeing his byline in print.

He approached the managing editor about staying on, offering to work weekends and nights. The internship was supposed to be just a summer job, DuBos was told initially.

He was sent to talk to the city editor.

“He said, ‘You just keep showing up and as long as they don’t tell you to go home, we’ll just see what happens,’” DuBos said laughing. “I went all through college part-time during the semester and over Christmas break and spring break I would work full-time because I wanted the experience.”

After graduating from UNO in 1976, he asked about a full-time job as a news reporter. When the city editor inquired with the business office about changing DuBos’ status, he got a surprise.

“You’ve never officially been hired here,” DuBos recalls being told. “I said, ‘But my name’s on the sign-in sheet!’”

The editor took care of the paperwork and formally hired DuBos.

DuBos remembers that his third-grade teacher made a prophetic statement about her young charge that resonated with him.

“She told another teacher, “Clarence is going to be my writer,’” DuBos said. “She was a great teacher. The only teacher that ever called me by my proper name—Clarence. I loved her so much, I forgave her for it! I never corrected her.”

Fueled by the schoolboy crush, DuBos said he was determined to prove her right.

Nevertheless, he ponders whether his career was fated at birth when he was given the nickname “Clancy” to differentiate him from his dad and grandfather. He was the fourth child—and the first son—born to Clarence Jr. and Dorothy DuBos.

As DuBos family lore goes, a hospital nurse suggested that “Clarence” was too large of a handle for such a tiny lad. She suggested “Clancy” which DuBos’ mother preferred to “Clay.”

“Sheriff (Frank) Clancy was a notorious sheriff in Jefferson Parish who ran the casinos,” DuBos said. “So, my nickname came from a politician.”

Further molding young Clancy’s view of his world was the fact that he grew up in a family of nine children—six girls and three boys. Outranked by three older sisters and outvoted by gender, DuBos jokes that his younger self was not a fan of democracy.

“And, lo and behold, I grew up to write about politics and democracy,” he said laughing. “I think it was either irony or preordained. I’ll let y’all decide!”

DuBos, who attended UNO with the help of a scholarship, said he and his siblings were the first in their family to earn college degrees.

“UNO was a great university,” DuBos said. “I truly got a world-class education in the history department.”

His parents taught him through their Catholic faith that it is important to be charitable and to give back to help others, DuBos said. His decision to support his alma mater financially comes naturally, he said.

“To me it is easy,” said DuBos. “UNO gave me a scholarship when I didn’t even ask for it.”

The University also created a middle class by providing an affordable college education to working class families and even people who were already working, DuBos said.

“That is something to be proud of. UNO is vital to the success of New Orleans,” DuBos said. “New Orleans will not succeed as a city unless UNO is recognized for the success that it is and is nurtured to grow to be even more of a success.”