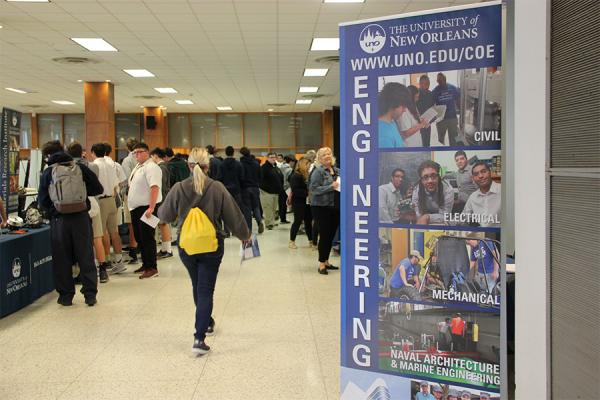 The University of New Orleans celebrated the value of engineering studies Wednesday, Feb. 19, with a daylong event for area middle and high school students.

Nearly 2,000 middle and high school students were on campus Wednesday to explore the marvels of engineering as part of the University of New Orleans National Engineer’s Day.

UNO offers the only civil, electrical, mechanical and naval architecture and marine engineering programs in the metro New Orleans area.

The second floor of the University Center was the epicenter for dozens of interactive displays that included robotics, paper bridge building, a rail gun, and laser harp. The booths were operated by student engineering clubs and representatives from local industries, including Huntington Ingalls Shipbuilding, Entergy, American Society of Civil Engineers (ASCE), Dell and the Army Corps of Engineers.

Ash shared a video of his “bot” in action.

Boucvalt said she brought 21 students to UNO for the event.

“They love it! The virtual reality, the hands on demonstration, spatial logic,” Boucvalt said, ticking off the different stations. “Thank UNO for doing this!”

The purpose of National Engineer’s Day is to show the next generation of young people what engineers do and share career opportunities with them, said Kim Jovanovich, assistant dean of engineering.

“The whole idea is to expose young people in the area schools as to what engineering is and how engineering affects their lives,” Jovanovich said. “They can talk to engineers, then they go next door and they watch the “Dream Big” movie.”

“Dream Big: Engineering Our World,” is a feature-length film produced in partnership with the American Society of Civil Engineers. It explores the human ingenuity behind engineering marvels large and small, and, producers say, promises to “transform how we think about engineering.”

Matthew Jayne, a senior at John Curtis, who is interested in a career in mechanical engineering, said he found the event informative.

“I went to the different sections and asked questions … about mechanical and civil engineering to get some feedback on it,” Jayne said. “I learned some really good information here today.” 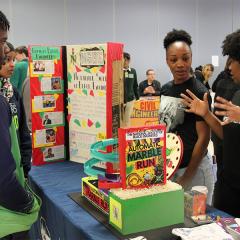 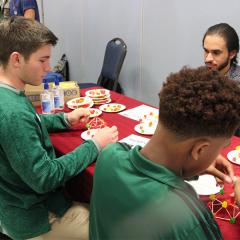 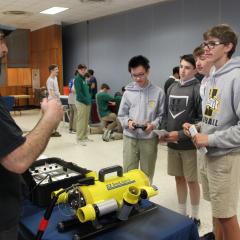 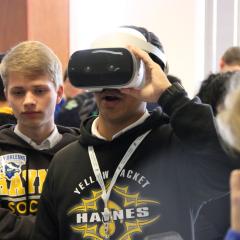 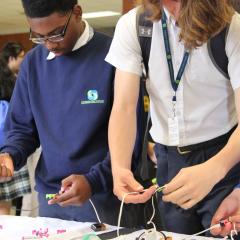 The University of New Orleans has dedicated the Virginia Rosanne Amato Memorial Patio at the front entrance of the Earl K. Long Library.  Read more