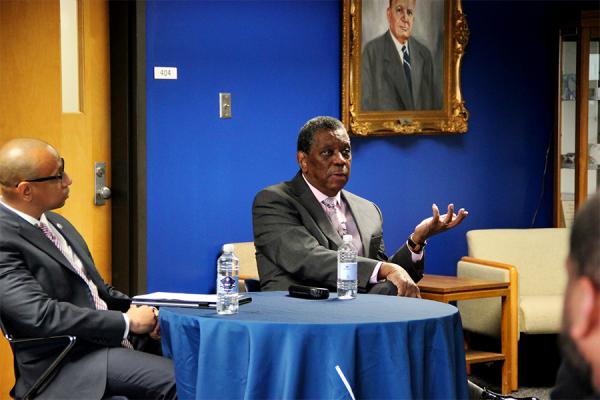 Raphael Cassimere Jr., University of New Orleans professor emeritus of history, who made his mark on the political landscape of New Orleans by helping lead boycotts as president of the NAACP Youth Council during the civil rights movement in the early 60s and 70s, did not set out to make history.

In fact, he hadn’t even planned to major in history, he told an audience at UNO on Wednesday.

Cassimere, who received his bachelor's and master's degrees in history from UNO, shared his experiences as the first African American instructor hired at UNO and as a leader in the civil rights movement.

“Bad things happened to people who belonged to the NAACP,” Cassimere said, referring to the targeted violence directed at members of the civil rights organization as they campaigned against discriminatory practices locally and across the U.S.

It was 1960, a tumultuous time for race relations, particularly in the South.
Cassimere, a student at what was then LSUNO, said he reluctantly followed a friend to an NAACP meeting in New Orleans and “got caught up.”

There were other UNO students at the meeting and Cassimere was elected to a leadership position on the Youth Council.

“I wasn’t even a member and I was elected vice president,” he said laughing. “I didn’t pay my dues for a week!”

Cassimere quickly became actively involved in the organization’s mission to end prejudicial practices and racial discrimination. It led him to change his college major.

“I was a pre-med major for 2 ½ years,” Cassimere said. “This was almost like a revolution. I got so caught up in the movement.”

In 1962, Cassimere help to lead a successful boycott and picketing campaign of local businesses on Canal Street that had refused to hire African American workers in capacities other than janitors and cooks. The businesses also refused to serve black people in the restaurants and lunch counters.

Picketing the downtown shops was a high-profile pressure tactic meant to get business owners to comply with the NAACP demands for equal access to facilities and more jobs.

“Everyone came to Canal Street to shop,” Cassimere said. “We thought it would be easy. It wasn’t, it took over two years.”

Cassimere still savors the victory because their actions help to make positive changes.

“It was very successful,” he said. “It was something that I feel very good about.”

It was a difficult time, he said. Some students balked at having him as their history teacher, Cassimere said.

Cassimere would remain in the history department for more than 35 years, rising to rank of professor. He retired in 2007.

Cassimere said he learned to navigate the prejudices inside and outside his classroom by learning how to live with others who were different and by teaching his students to be willing to listen to other people’s opinions.

“That’s one thing I learned as a teacher, I was able to change minds,” Cassimere said.

“A Conversation with Dr. Raphael Cassimere Jr.,” was sponsored by the UNO organization moMENtum. The organization is an academic and social support program established to address the needs and challenges faced by African American male students at the University.