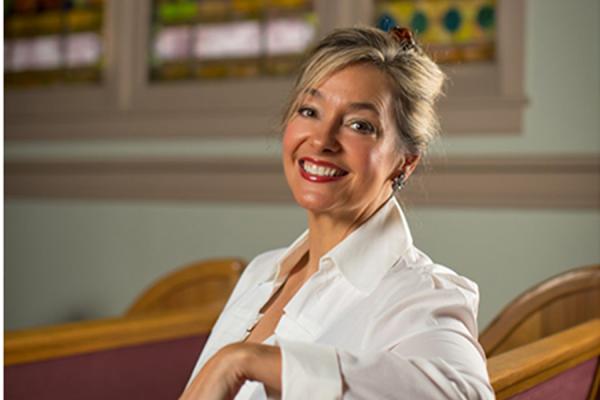 Forced to evacuate Slidell ahead of Hurricane Katrina in 2005, University of New Orleans alumna Deleen Davidson has turned her tale of woe into a creative enterprise garnering rave reviews in Hot Springs, Arkansas.

Davidson, a classically trained soprano whose bachelor’s degree in history is accompanied by minor studies in music, fine art and German, founded The Muses Creative Artistry Project in 2007, two years after her emergency move.

Davidson’s parents had built a house in Hot Springs with plans to retire there. After Davidson’s father died, her mother was going to sell the house, but never got around to it.

“It became the place we evacuated to and ended up staying,” Davidson said. “It was a God-thing. We were protected and had a place to come and start over.”

The nonprofit arts organization is dedicated to “excellence, inspiration and wellness, preserving classical art and music through performance and education,” Davidson said.

It has become the area’s only year-round touring performing arts organization, presenting premier productions throughout the state and region. In 2016, the Hot Springs Chamber of Commerce nominated Davidson for a “Woman of the Year” award and nominated her company for a community service award for best organization.

Soon after arriving in Hot Springs, Davidson quickly ascertained that what she had taken for granted in New Orleans—ample and easy access to the myriad performance arts—did not exist in her adopted city.

“I realized that there were no year-round music or arts programs in the area, and that if I were going to perform I would have to create that platform myself,” Davidson said. “They had art galleries, and there was interest in classical music, but very little access to live performance and limited education and exposure across all age groups and economic levels.”

Davidson began researching the how-to of building a nonprofit organization, networking and accepting singing engagements wherever she was invited. She taught art appreciation at a community college and joined the summer faculty of the Hot Springs Music Festival.

With the help of a local women’s group, she raised enough money from a $50-a-plate luncheon to buy a piano. Her old one perished in the 20-foot storm surge that swamped her Slidell home.

“I began performing small chamber concerts in my home, and in area churches, inviting other talented musicians to join me, and growing a group of supporters who had a desire for high-quality artistic performance,” Davidson said.

She was invited to perform at the Arkansas governor’s mansion twice under then-Gov. Mike Beebe’s administration. The governor and his wife became major supporters of her push to establish performing arts programs, she said.

‘Treasurer of the Arts’

In 2008, just three years after evacuating Louisiana with her mother, “four cats, one laptop computer and two changes of clothing,” Davidson’s was named Arkansas’ “Treasurer of the Arts,” by the Beebe administration.

“It wasn’t a functional title, but it indicated that they believed the arts in the state was of value and that they needed someone to advocate for them and treasure them,” Davidson said. “I would go around as the ‘Treasurer of the Arts’ and talk about the connection between economic vitality and artistic excellence.”

She learned how community leaders used the arts to tout quality of life during the recruitment of businesses, Davidson said, and it became her focus to champion the artists and financial support for the arts.

“They will tell you they have a Friday night art walk and they have music in the park on Sundays and they will play up all of the artistic … they love to accentuate the arts,” Davidson said. “But how do you support them? I love that the communities want to use the arts as a selling point, but don’t exploit the artists.

The Muses project began on a shoestring budget, Davidson said, that allowed for only two to four performers with no costumes, special lighting or sound equipment.

It has blossomed into a regional production company that is housed in its own downtown building, purchased in 2013, that includes a 150-seat performance hall, offices, kitchen and a reception hall.

The organization regularly produces six to 12 new shows each season with casts of 30 paid performers or more.

The shows range in genre and scope, everything from opera, Broadway and jazz to sacred classical choral and chamber salon concerts, and Celtic and world music. They involve multiple artistic disciplines, including vocal and instrumental music, dance, visual art, poetry and drama, Davidson said.

Davidson said Muses, named for the creative and inspirational goddesses in Greek mythology and a nod to her New Orleans roots, also provides on-the-job-training through its Young Artists Program for area college students who previously lacked an outlet for their creative endeavors.

Many performing arts students were directed to the teaching profession instead of professional performances because there were no local opportunities available to refine those skills, Davidson said.

“Muses became that space between ‘I’ve got my education, I understand it theoretically, but I don’t know how to put it into practice,’” Davidson said. “So they started coming here.”

The program started with five students and now has regular rotations of 20 to 25 student performers who are paid for their performances through sponsors.

“I get banks and corporations and insurance companies to realize that this is job training just like any other and these kids have a skill. They have a gift and we need to compensate them for their work,” said Davidson. “And (students) need to learn that their skill has value and is compensated when honed.”

Davidson also is a fierce advocate for the value of a liberal arts degree.

“I love my UNO education, it changed my life,” said Davidson, who says she still relies on choral techniques learned at UNO to direct her church choir. “I was not a trained director, but I had the best choral instructor in the country when I was at UNO. Dr. Ray Sprague taught me everything good I know about choral music.”

Choosing to pursue a career in liberal arts does not “condemn you or your loved one to a life of deprivation and despair,” said Davidson, whose mother was an opera singer. Her father was an engineer.

Both supported her eventual career path to the arts, and she tries to lend that same support through The Muses project.

“Because I have dedicated my life to the arts, and sincerely believe that artistic entrepreneurship can be taught, my favorite thing is working with students who love the arts, but have no idea how to connect the dots, build their program of study or design a potential career,” Davidson said. “Creativity is a commodity of great value, and can be leveraged in many unexpected ways.”

In Davidson’s case, her creativity yielded a thriving nonprofit arts program from a personal ground zero.

“I’m so grateful,” Davidson said. “I’m grateful that by my nature, I’m tenacious, I’m curious. I don’t like to quit … it just seemed logical that this should work here.” 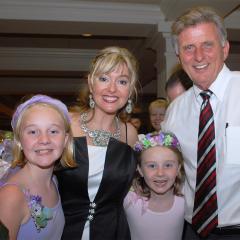 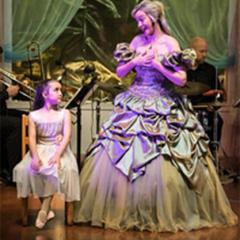 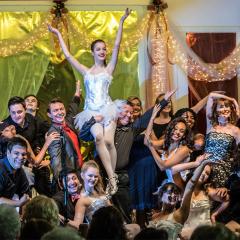 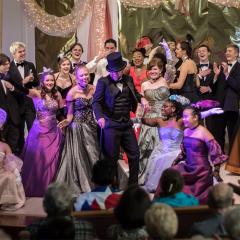