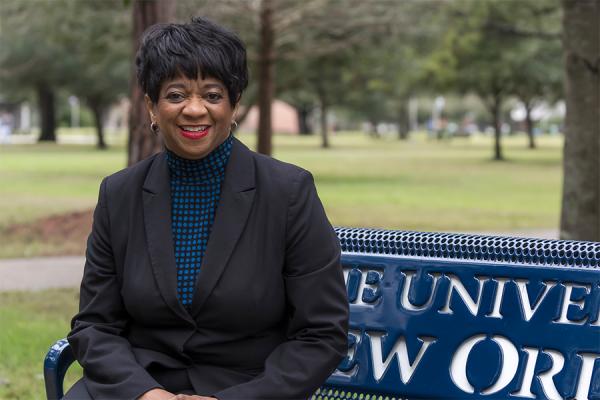 Gloria Walker is vice president for business affairs and chief financial officer at the University of New Orleans.

Gloria Walker, the new vice president for business affairs and chief financial officer at the University of New Orleans, laughingly refers to herself as an analytical “bean counter” and a “workaholic.”

She also considers herself fiercely loyal to her employees and a motivator who believes mentoring is a key to helping the University meet its mission of providing educational excellence.

“I don’t like to get in the weeds—I  have the skill set to do that—but I really like to  mentor folks and give my staff as much control over their subject matter as possible,” said Walker, a certified public accountant by trade and a big-city girl by birth. “Critical, I think, to the mission of the institution, is having people who are well-versed in their subject matter.”

She succeeded Gregg Lassen who retired.

Walker, who arrived on campus Jan. 21, was most recently vice president for finance and administration at Cowley College in Kansas. She was previously executive vice president and chief operating officer at Texas Southern University in Houston as well as executive vice chancellor for finance and administration and CFO at Houston Community College.

When Walker arrived at Texas Southern, the university was on the brink of insolvency. Over a three-year period, she helped develop a financial plan and created operating policies that kept the university financially stable.
“I, working with the president and the leadership team there, was able to keep them from being insolvent,” Walker said.

Walker has broad knowledge of all major areas of financial operations and business services gleaned from different types of institutions. Early in her career, she worked as a state auditor in Texas but quickly realized her personality was not suited to the often-isolating work.

“I’m a people person,” said Walker. “When I got to higher education accounting, I was just flourishing! I really love being around the students. You can see the bigger picture of what higher education does.”

She left state government for the private sector, working as an accountant in the oil and gas industry for several years. She later became the chief financial officer and controller for the Harris County-Houston Sports Authority where she was responsible for construction and managing the debt on Houston’s professional sport arenas and ancillary facilities, including the construction of Minute Maid Field for the Houston Astros.

“I knew they did a lot of construction and bonding in Texas so I wanted to learn finances from that side of the house,” said Walker, who grew up in Dallas.

Walker spent seven years as the executive vice chancellor for finance and administration and CFO for the 70,000-student Houston Community College where she oversaw a $300 million operating budget and a $600 million capital improvement budget, among other duties.

“I’m not afraid to make hard decisions,” Walker said. “I take a strategic approach to decision making and understanding what the issues are. I’m a fact finder.”

Walker said her role in keeping the University of New Orleans successful is ensuring that resources are available for the institution to execute its mission.

“Just as if you were in a Fortune 500 company, you’re trying to develop the best product,” Walker said. “The best product is our student, that’s our end results. So, in order to do that we must have the resources to deliver education in a fashion that students are going to have a monetary gain at the end of the day from being with us; either getting a better job or getting a job or going into research.”

Walker said higher education is a business with a budget that spans across all areas of the institution.