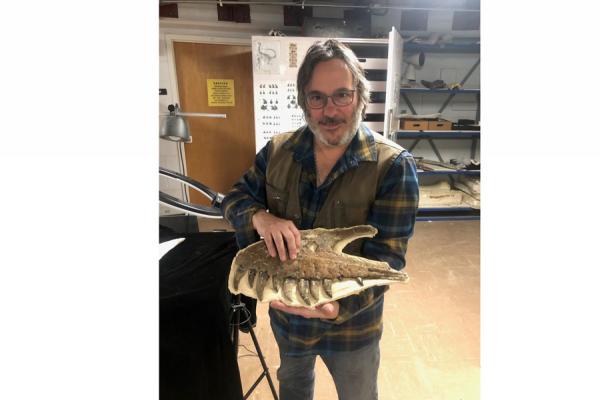 UNO alumnus David Burnham, a paleontologist with the University of Kansas Biodiversity Institute and Natural History Museum, holds the upper jaw of a juvenile T. rex found in 2017.

You don’t have to be Sherlock Holmes to deduce the research interest of University of New Orleans alumnus David Burnham. In fact, he gives a T. rex-size clue in his one-word email address: dinosaur.

That keen interest, first cultivated as an undergraduate student at UNO, helped Burnham to lead the excavation team that uncovered the fossils of a juvenile Tyrannosaurus rex estimated to have lived 66 million years ago.

The discovery of a juvenile T. rex is uncommon, said Burnham, paleontologist at the University of Kansas Biodiversity Institute and Natural History Museum in Lawrence, Kansas.

“They are incredibly rare with less than a handful found,” Burnham said. “We know very little about the lifestyle of young T. rex so the KU discovery gives us another data point.”

The fossils help researchers learn more about how the dinosaurs developed and how they lived. However, because of the juvenile’s rapid growth rate, they were not small for long. Scientists believe that T. rexes matured at 19, Burnham said.

Even if the juvenile managed to escape the cannibalism of the adult Tyrannosaurus rex, their bones were more fragile and subject to erode quicker after death, making them more difficult to find, Burnham said.

The discovery, made near Montana’s Hell Creek Formation in 2017, yielded an upper jaw section, with all of the teeth intact, along with parts of the skull, foot, hip and backbone of the young T. rex that the team named Laurel. 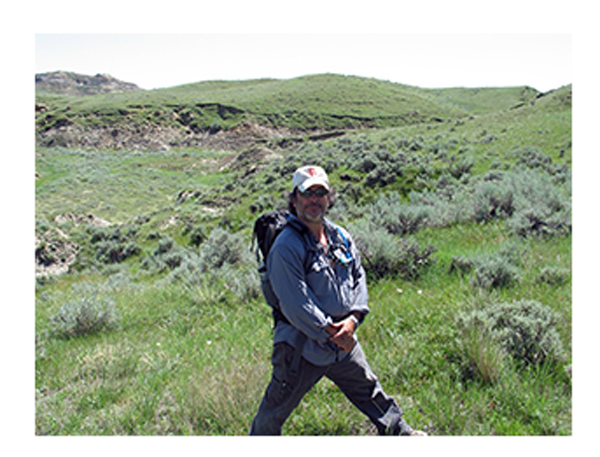 Burnham estimates Laurel’s age to have been around 11 years old and projects that it would have been about 20-feet long with a skull extending another 3-feet. It would have stood 7-feet-tall at the hips, he said.

That is about half the size of an adult, which experts estimate to have been about 40 feet long, with 12 inches of sharp, bone-crushing teeth. The average T. rex height was 12 to 20 feet tall, scientists say. They are estimated to have weighed about 10,000 pounds.

The speed of these massive creatures ranged from 5 mph to 20 mph. Juveniles at Laurel’s size averaged 25 mph to 40 mph, Burnham said.

The find revealed that the young T. rex did not have the tremendous bite force of their adult counterparts and might have occupied a different ecological niche that allowed them to go after different prey, Burnham said.

“The adults were too slow to catch the fast-running, feathered ostrich-like dinosaurs. But the young ones, we presume, utilized their faster speed to catch them,” Burnham said. “They were not dumb reptiles. In fact, they are the progenitors of birds and were probably more intelligent than we have assumed. T. rex had a brain as large as ours!”

Scientists estimate that the T. rex lived during the last two million years of the Cretaceous Period, about 65 million to 67 million years ago.

Researchers say the rock formations at Hell Creek date back to that time and are a hot bed for dinosaur fossils.
Burnham has Laurel’s fossils in his lab where they are being cleaned, examined and prepared for exhibition.

For now, the skull of the juvenile T. rex is “fairly complete,” so those bones might be exhibited first, he said.

“We are in the early planning stage but we are not finished digging at the site,” Burnham said.

Burnham’s job is a mixture of lab work, research and public outreach, he said.

“I also mentor undergraduate and graduate students as a thesis adviser,” he said. “On Fridays I have a volunteer program so anyone who wants to work on dinosaur bones can come in and participate.”

His interest in fossils was piqued after taking a paleontology course at UNO from earth and environmental sciences professor Kraig Derstler, Burnham said.

“As an undergrad I almost became an English major and studied screenwriting under Andrew Horton. I also wrote film reviews for the school newspaper and was on the board of the student union movie committee,” Burnham said. “But after that paleontology course, I was hooked.”

“I was able to get a very robust education in biology and geology, both of which a paleontologist needs,” he said.

“We were able to go on many field expeditions to search rock outcrops in the South for sea monsters called mosasaurs as well as going out west to hunt dinosaurs,” Burnham said.

Burnham spends at least a month in the summer and a few weeks in the fall at excavation sites to collect specimens.

“I bring them back to my lab where they can be removed from the rock and carefully cleaned so they can be studied and put on exhibit,” he said.

The fieldwork is the best part of the job, Burnham said.

“Discovery is such an adrenaline punch that lights up my curiosity about what the world was like millions of years ago,” he said.  “I also enjoy traveling around the world visiting other museums to conduct research.” 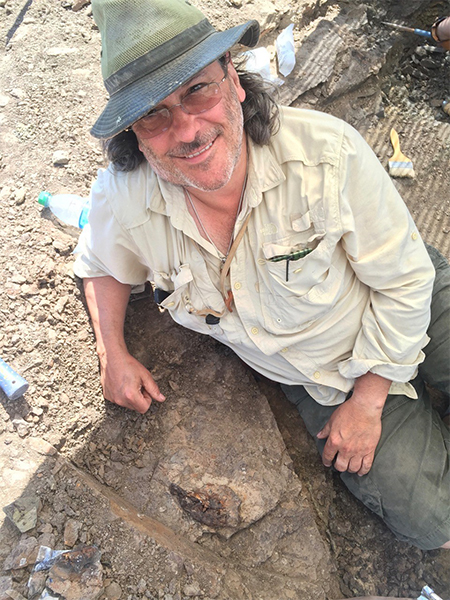