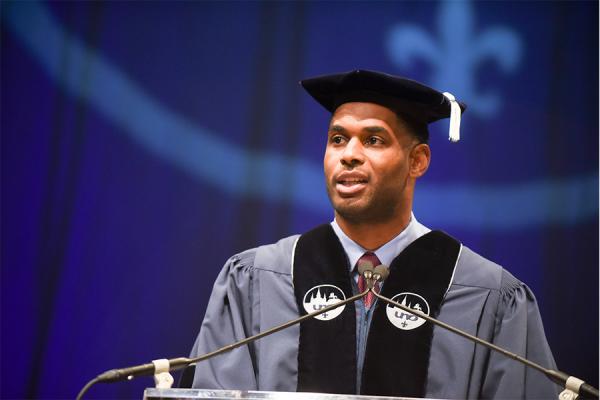 Entrepreneur and former New Orleans Saints star receiver Marques Colston was the commencement speaker at the University of New Orleans on Friday, Dec. 13, 2019.

Former New Orleans Saints star receiver Marques Colston relentlessly pursued a professional football career, making it happen despite the odds stacked against him.  Statistically speaking, Colston, who was a seventh-round draft pick from off-the football-radar Hofstra University, was not supposed to have a professional football career, he told graduates at the University of New Orleans on Dec. 13.

“Your work ethic, your ability to overcome obstacles and your willingness to persevere are the real keys to success,” said Colston, who delivered the keynote address to the fall graduating class of 2019. “My journey has embodied that belief. There was no way that a skinny kid from Pennsylvania, who could barely get recruited out of high school, should be here today as the Saints all-time leading receiver.

“It was my irrational confidence that led me to have the kind of career that I enjoyed in the NFL. None of those goals that I set for myself were ‘rational’ or made logical sense to anyone but me.”

Following a 10-year career in which he earned a Super Bowl victory and became the Saints all-time leader in receptions and total touchdowns, Colston was released from the team.

He decided to retire from playing football rather than seek out another team, he said.

“That day I felt very similar feelings to what you may be feeling sitting here and undoubtedly will again in life when you make a major life transition,” Colston told the graduates. “Scared, nervous, anxious, excited, yet ready.”

Colston turned his attention to entrepreneurial endeavors. He pursued business ventures with the same focus he employed to make it to the NFL, he said.

His efforts are fruitful. Colston is the founder and managing partner of Dynasty Innovation, a strategy and execution firm focused on marketing, branding, sports and professional development. He is also partner and director of business development at Main Squeeze Juice Co., a New Orleans-based fast-casual juice and smoothie bar that has several franchise locations spanning from New Orleans to Houston.

Additionally, he leads the Center for Innovation at Virtua Health System, and serves on the advisory board for the One Team Collective, a sports technology accelerator run by the National Football League Players Association.

In 2018, he collaborated with Columbia Business School to create an executive education program for current and former athletes. Seeing a lack of structured education programs for athletes, he worked with the business school to develop a program that would give athletes the tools and knowledge to become more successful entrepreneurs and investors.

“You also charted paths to success of your very own that can be duplicated throughout the rest of your lives. It wasn’t easy for any of you guys to get to this point. You’ve all had different challenges to overcome, and the fact that you’re here is proof that you can do it.”

During the commencement, President John Nicklow awarded an honorary doctorate of humane letters to Colston, making him the second in his family to hold a UNO degree. Colston’s wife, Emily, received a bachelor’s in planning and urban studies in 2014.

The 2019 graduating class hailed from 31 U.S. states and territories and 23 countries.

“The last four years have led us all here, to this arena today. Though we come from different directions and experiences, we are connected,” Colston said. “Today, though, you begin a new mission. Some of you know what you want to do next, and others of you have no idea, and that’s OK … The unknown that lies ahead can be a very unsettling feeling; we all go through it. It is a part of evolution and growth.”

Siblings Colette and Stefan Muro of Metairie and twins Brad and Brendon Smith of Algiers can relate to “evolution and growth.”

Each of them started their academic journeys at different colleges, but on Friday, they were among the hundreds of students assembled in the auxiliary gym at UNO’s Lakefront Arena, preparing for the culminating procession amid congratulatory hugs, high-fives, group photos and selfies.

“I really liked UNO, the community, the people, everybody was supportive,” said Brendon Smith, as his brother, Brad, adjusted his graduation stole. “It was like a team … everyone was trying to help each other out to reach that goal.”

“And it’s by the lakefront,’’ said Brad, adding to his brother’s list of UNO’s attributes.

Colette Muro, who majored in hotel, restaurant and tourism administration, displayed her enthusiasm on a mortarboard decorated with glittering all-capital letters that read “HEY LOOK MA, I MADE IT! 2019.”

Her brother, Stefan, an English major who plans a career in sports journalism, was excited about the pending ceremony and Colston being the speaker.

“It’s like they knew I was coming,” said Stefan with a laugh.

“I have a thing for people telling me what I can’t do, so that I can push that much harder,” said Garrett, who plans to start a career with Delta Airlines. “I’m pretty proud of the debt-free part, several self-help financial books later and my goal is accomplished.”

While many students marked the joyous occasion with flashy mortarboards topped with colorful flowers and other items, biological sciences major Mariah Mouton took it up a notch. She added lights.

“So my family can recognize me because I know there are going to be a lot of people,” said Mouton, a native of Church Point, La. “Just so they can see me and know it’s me.”

As the graduates prepared for the next chapter of their lives, Colston shared that the foundation of his “irrational confidence” is rooted in three pillars: ambition, mastery and consistency.

He urged them to set actionable goals that exceed expectations, to become a master of their craft and to consistently work to create positive habits.

“When your confidence is built on these three pillars, it also creates a level of ignorance around your limitations. Your focus is the road ahead and what’s possible, rather than being limited by what has been done before,” Colston said. “The harder you work, and the more you dig in, the more you stack the odds of success in your favor.” 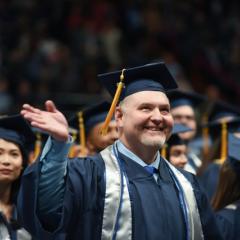 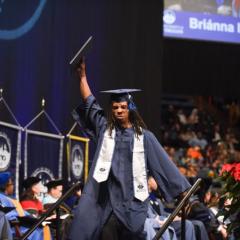 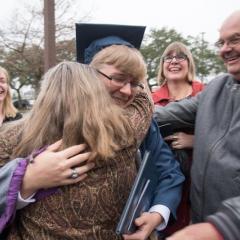 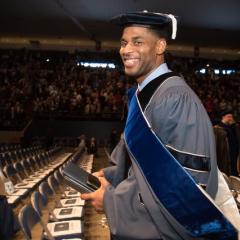 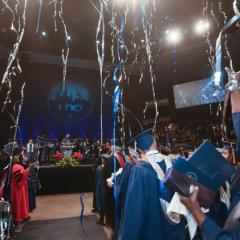 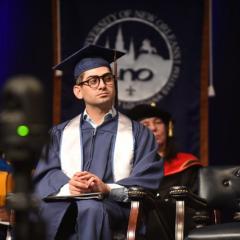 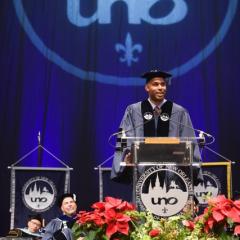 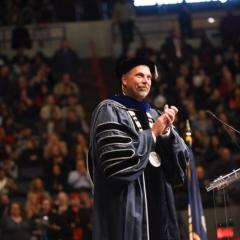 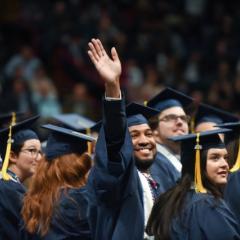 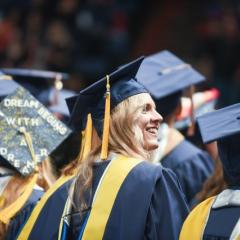