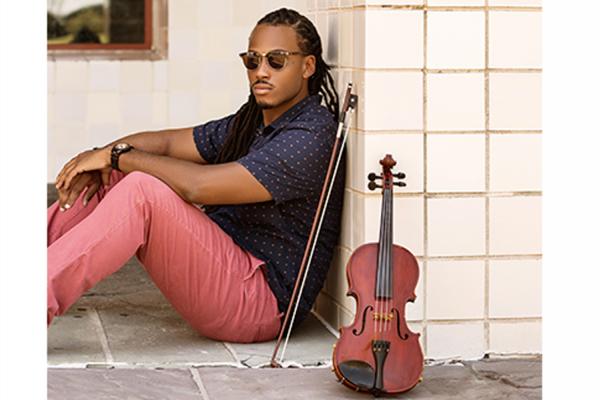 University of New Orleans alumnus Trenton “T-Ray” Thomas is charting a music career with a love of the violin and an outside-the-box playlist.

The red Cantini electric violin is slung over his shoulder, much like a jacket. The stringed instrument, fancy though it is, is neither prop nor accessory. For Trenton Ray Thomas, known in the entertainment world as “T-Ray the Violinist,” it is a necessity.

The University of New Orleans music education graduate travels the country dispelling stereotypes by making his violin sing tunes as myriad as the venues in which he’s performing them.

“Sometimes people will see me with a violin and before they hear me, say ‘Oh, he’s going to play some classical music,’” Thomas said. “Or, they hear my name and they automatically have a preconceived notion about what it’s going to be.”

This year Thomas has been a featured artist during the Essence Festival in July and entertained at New Orleans Saints quarterback Drew Brees’ 40th birthday bash in January.

“It was just cool to be in that space and just soak it in,” Thomas said of Brees’ soiree. “It’s not like a once-in-a-lifetime thing, but you know it kind of gave me a preview of what’s to come.”

Thomas describes himself as a multi-genre violinist and his repertoire consists of Top 40, R&B, hip-hop, jazz and, yes, classical music.

“The reason I say multi-genre is for people to understand that it’s more than just one musical type that can be played on this instrument,” Thomas said. “When I was teaching, and when I do workshops, I tell kids, even though you’re playing the violin or you’re playing the clarinet or tuba, don’t let that box you in … music is music. You have the ability to choose whatever type of music you want to convey through that instrument.”

Thomas understands the staid stereotype because he once thought the same way: the violin was for playing classical, orchestra-type music—or zydeco.

Here’s a video of Thomas’ cover of Khalid's "Talk"

He was introduced to the violin as a fourth-grade student in Baton Rouge. He saw the twice-a-week arts enrichment visits as a ticket out of his regular class. He had never handled such an instrument and had never seen an African American man playing it, Thomas said.

“That was my first time ever seeing somebody that looked like me, play the violin and I was like, ‘This is amazing’,” Thomas said. “It originally started out as just a way to get out of class then I started to like it.”

That “like” of the violin bloomed into passion in high school when Thomas heard contemporary jazz violinist Michael Ward’s music.  Thomas and Ward’s son, Shaun Ward, were friends at Woodlawn High School.

“He brought the album to school and I listened to it,” Thomas said. “It really changed my perspective of the violin because up until that point the only music that I related to the violin was classical, zydeco, Cajun fiddler music.”

During his junior and senior year of high school, Thomas attended the New Orleans Center for Creative Arts on the weekends and knew he wanted to pursue a career in music.

When he earned a full scholarship to UNO, he enrolled in the music program.

“I met people that I’m still friends with to this day,” said Thomas, a former UNO Ambassador and member of Alpha Phi Alpha Fraternity. “I built great relationships with people who worked there and who have graduated.”

Thomas later switched his major to music education, which allowed him to land a salaried teaching job while still playing gigs.

Five years ago, he decided to leave the classroom to pursue music fulltime after his day job conflicted with the chance to play the French Quarter Festival with the now-Grammy Award nominated band, Tank and the Bangas.

It was a difficult decision, he says, but it has paid off.

“I can see the progression of me as an artist, branding myself and being able to handle certain situations on the music side and the business side,” Thomas said.

Thomas is completing two projects that are scheduled for release next year. One is called “Unexpected Sounds Vol. 3,” which is a cover project of well-known songs featuring a violin lead.

“My goal was to get people to see the violin in a different light,” Thomas said. “It wasn’t just a background instrument it can hold a melody just as good as somebody singing or rapping or whatever the case might be.”

A debut compilation of original music called “Visionary” is set for release next fall, Thomas said.