Mental Health Panelists: ‘Don’t Be Afraid to Ask for Help’ 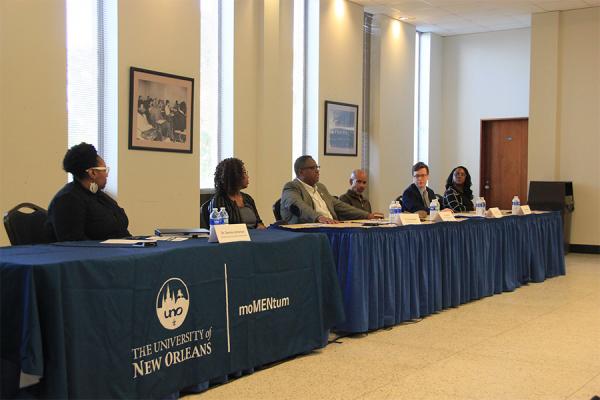 A panelist of mental health professionals discuss ‘Mental Health in the Black Community’ during a forum at the University of New Orleans sponsored by the campus organization, moMENtum.

Many people find the topic of mental illness difficult to discuss, in part because of the negative stereotypes associated with it, according to mental health professionals. However, an alarmingly steady rise in the number of suicides among young people, particularly among people of color, means society has to remove the fear of labels when it comes to mental health and seeking professional help.

Suicide is the leading cause of death for African Americans aged 15 to 24, said Zarus Watson, University of New Orleans associate professor of counseling.

Watson said the suicide rate for African Americans was a “trace” number in the early 1970s and climbed over 250 percent by 1995. He thinks part of the reason is because mental illness was “swept under the rug” for so many years.

“As a group we have a tendency to not necessarily identify mental health as an issue,” said Watson, who is African American. “It wasn’t something that we discussed. It was something mostly to hide.”

The need to bulldoze that uncommunicative wall led to the Nov. 20 panel discussion “Mental Health in the Black Community,” sponsored by the UNO organization, moMENtum.

The organization is an academic and social support program established to address the needs and challenges faced by African American male students at the University. The program’s 16 members chose the topic of mental health for its fall panel discussion, said Taryn Chevis, manager of academic administration and a co-director of the program.

“A few lighter topics were thrown out for us to choose from, however, the guys overwhelmingly chose mental health,” Chevis said. “I was excited that these young men chose this topic because I believe it shows somewhat of a shift in overall thinking. I think people are open to having more of these conversations.”

The panelists discussed the need to be “self-aware” about your mental health, and to know when to ask for help.

“As a practitioner I tell my clients all the time that there is no ideal state of mental functioning,” said Danielle Burton, a doctoral student in UNO’s counselor education and supervision program. “What you can do is define for yourself who you are, what your values are and what your baselines are in terms of what you’re able to accomplish … So, a mentally healthy person does recognize those limitations and a mentally unhealthy person is usually just unaware.”

Possible signs that someone may need help or is having some emotional struggles, include severe changes in eating or sleeping habits, being constantly angry or worried, said Al White, owner and director at Self-Enhancement Center, Inc.

A constant theme from the panelists: Don’t be afraid to ask for help.

“Everybody in here is mentally ill. If you’ve grown up in the United States, you’ve got issues,” Watson said.” You have baggage. I have issues. I’m in constant recovery. The only question is how far does the impact go and are you aware?”

Ryan O’Pry, assistant director and coordinator of clinical training of UNO’s Counseling Services, gives this reminder: “I always think that it’s important for me and clients and anyone to just remember that our mental health is not our whole identity,” he said. “It’s part of us, just like our physical health or our spirituality.”