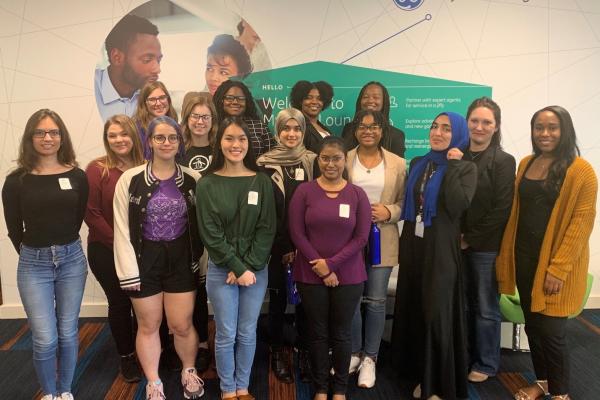 Some members of the Association of Computing Machinery Women’s Chapter participated in a professional development workshop at General Electric’s New Orleans office.

University of New Orleans computer science students participated in a professional development workshop at the Central Business District offices of General Electric and Baker Hughes hosted by The Women's Network at the two companies.

The 13 students, members of the University of New Orleans’ Association of Computing Machinery Women’s (ACM-W) chapter, spent the day discussing the technology industry and gaining insight from working professionals on how women can successfully navigate the male-dominated field.

Ibrahim said she was thrilled with the turnout.

“When my ACM-W cohort came to visit GE just a few years ago, there were only three of us,” Ibrahim said.

Deanna Delancey, director of technical product management at Baker Hughes and 25-year veteran of the tech industry, gave students some career pointers. They also heard from a panel of former interns whose experience at GE and Baker Hughes ranged from one to six years.

Students toured the site before a “bragging rights” session in which DeCarla Hodoh shared the highs and lows of her 30-year career in the tech industry.

Many of the students felt that bragging rights with Hodoh was the most helpful session for them.

“Bragging rights was an effective tool at removing the barriers between expert and novice. It put us all on the same level for a moment,” student Abby Autin said. “It was very comforting to see that my struggles weren’t uncommon.”

Huong Nguyen, ACM-W president, said she could relate to much of what Hodoh shared with the group.

“I’ve realized that I have made myself smaller than I am by being less vocal in an attempt to make others feel comfortable,” Nguyen said. “She reminded me to be more assertive and give myself more credit without the fear of being judged.”

Over a casual lunch, GE and Baker Hughes employees reviewed the students’ resumes and gave them feedback.

“I am typically nervous around people with high levels of experience and seniority. I tend to compare my achievements to theirs and feel very insufficient,” she said. ”But in just the first few minutes, so many of these women affirmed that they were in the same position once. Hearing this raised my confidence quite a bit, and I became more engaged for the rest of the experience.”

In reflecting on the event, Spicer said she appreciated the insights that were shared during the Nov. 7 workshop.

“I am grateful to the Women's Network at GE for showing our female students that there is a seat at the table for them,” Spicer said.

Throughout the day’s conversations, Spicer said she was reminded, “that it is a complicated process for us to take full advantage of that seat.”

While the day was full of support, admiration and empowerment, it was also a reminder of how much work still needs to be done to level the playing field in tech, Spicer said.