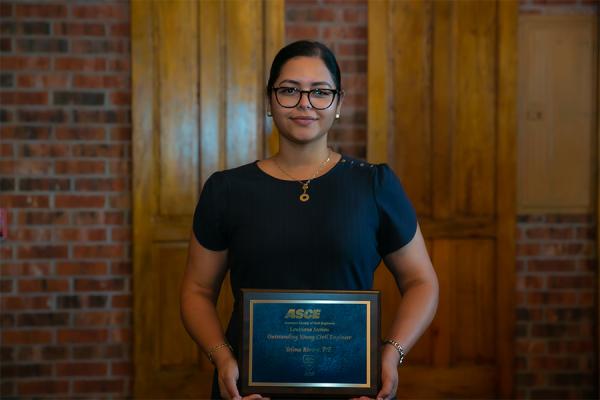 Yelena Rivera has learned to take the curve balls of life with a calm assurance that unforeseen circumstances will straighten out; she just has to stay the course. For instance, Hurricane Katrina forced Rivera to evacuate New Orleans just two weeks after moving from Belize to attend the University of New Orleans.

The University was able to reopen later in the fall semester, largely through courses that were taught online or at the University’s campus in Metairie. In spite of all of the upheaval and the fact that she had no relatives in New Orleans, Rivera followed her instincts and decided to remain enrolled at UNO.

That decision set her on a path to earn a degree in civil and environmental engineering in 2009.  In the decade since graduating college, Rivera has established a career as a professional engineer at C. H. Fenstermaker & Associates, LLC, a Lafayette-based consulting firm with offices in downtown New Orleans.

Rivera’s responsibilities include calculating cost, determining the feasibility of projects, creating specifications, plans, construction schedules, and designs for projects, and providing support for bidding and construction of projects.

In September, Rivera was named the American Society of Civil Engineer Outstanding Young Civil Engineer in Louisiana. The annual award is given in recognition of professional achievements, leadership and exceptional dedication and service to the profession.

“I just feel sometimes that things are just meant to be and you are just projected in the direction,” Rivera said. “You may have a general idea … but, I don’t know, it just all works out.”

That’s not to say that Rivera does not plan. She does—in detail. She laughs as she tells the story of how she “mapped out” a portion of downtown New Orleans in search of a job shortly after graduation.

“I guess because I’m an engineer I literally mapped out downtown New Orleans and the exact buildings of where I was going to go, companies that I was going to target,” Rivera said.

She had researched the companies that she planned a “cold call” visit to get an understanding of the kind of projects they worked on, what they were successful at doing and aligning those findings with what she wanted to do as an engineer.

“I did a map and laid out a strategy,” she said. “I was just being open-minded. I knew that I was walking in cold.”

Rivera also knew that she needed to find a job before her student visa expired and she was forced to leave the country.

“I decided to just go down Poydras, park and see what comes of it,” Rivera said.

Her tenacity paid off when representatives at two companies agreed to meet with her. These were not full-blown interviews, but informal discussions about what she could do and what she wanted to do, Rivera said.

“Fenstermaker was one of them,” Rivera said. “They called me back for a formal interview, and that’s pretty much how that worked out.”

Although she did not have experience, Rivera said her stellar academic record and involvement in volunteer work outside the classrooms and in engineering clubs boosted her standing with potential employers.

“I had just completed my bachelor’s degree and graduated with honors,” she said. “I think a company likes to see that you are a well-rounded student who can handle different projects at the same time because that will kind of carry through to your job.”

Now with 10 years of experience, Rivera takes the lead on projects and oversees two employees in her New Orleans office. She is also the chair of the Louisiana Civil Engineering Conference and Show, an annual professional development conference in New Orleans that attracts hundreds.

The best part of her job, she said, is seeing how her company’s projects improve the community.

“Whether it is transportation, flood fighting, just basically how it contributes to the growth and protection of the community,” she said. “That’s the most satisfying part. You have to spend a lot of time doing the design work, overseeing the construction, but you really don’t see the end result until the project is done, and you see it implemented and being used by the public.”

One of Rivera’s first projects was the more than $32 million elevation of an existing levee in Plaquemines Parish. She worked with her mentor on the long-term assignment.

“It was good experience to see the project go from the beginning to the end,” she said. “There were a lot of lessons learned, a lot of growth for me. I think that was one of my proudest moments, completing that project.”