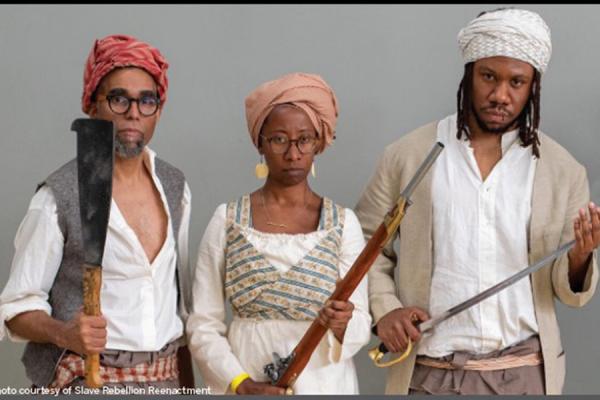 A roundtable discussion at UNO on Nov. 13 follows the re-enactment of the Jan. 8, 1811 uprising by hundreds of enslaved people.

The forum, “(Re)presenting History: Reflections on the 1811 Slave Rebellion Reenactment & Its Afterlife,” will focus on the impact of the Jan. 8, 1811 uprising on the outskirts of New Orleans that historians say was the largest rebellion of enslaved people in U.S. history.

The discussion is from 6-8 p.m. in the Performing Arts Center Recital Hall.

Scott has been working for six years on the large scale, community-engaged art project and re-enactment that will take place on Friday (Nov. 8) and Saturday (Nov. 9) in St. John the Baptist Parish, St. Charles Parish, Kenner and New Orleans. Hundreds of re-enactors will retrace the path of the rebellion that began in what is now LaPlace, La., about 30 miles west of New Orleans.

Scott is known for his powerful, sometimes political and incendiary, works that bridge art and activism by intimately connecting the visual with the social. His work is exhibited across the U.S. and internationally. In 1989, his art became the center of national controversy over its transgressive use of the American flag, while he was a student at the School of the Art Institute of Chicago.

The roundtable discussion at UNO follows the re-enactment of the 1811 uprising produced by Scott and his fellow panelists who helped to organize the reenactment event:

•    Ron Bechet, an art professor at Xavier University, who earned a bachelor’s degree in art from UNO and an MFA degree from Yale University. He has exhibited work nationally and internationally and is known for intimate drawings and paintings inspired by the land and circumstances of southern Louisiana. He has served as the first director of Xavier Art Department’s Community Arts Partnership Program and served in many arts and youth programs in the New Orleans area as both an adviser and a practitioner.

•    Gianna Chachere is founder and executive director of the New Quorum, an artist residency that brings musicians from around the world to New Orleans for performance and collaboration. During the last 20 years, she lived in New York and Los Angeles working with various arts and higher educational institutions in curating, producing and fundraising. She was a producer of the Peabody-nominated radio series “Unprisoned” and is currently the producer of “Improv New Orleans: A Festival of Ideas,” a multi-disciplinary conference looking at improvisation across genres.

•    Karen-Kaia Livers is an award-winning actress, consultant and casting director who has been working as community outreach coordinator for the 1811 re-enactment project. Recently she was nominated for best actress at the Tribeca Film Festival U.S. Narrative Competition for her lead role in “Burning Cane.” Livers, an alumna of UNO and former student at the New Orleans Center for Creative Arts (NOCCA), has appeared in films such as “Queen & Slim,” “Triple Nine,” “Hurricane Season” and television series including “CLAWS,” “NCIS New Orleans,” and “Vampire Diaries.”

Elie, a former columnist for The Times-Picayune, is a Los Angeles-based writer and filmmaker who has written for the HBO series “Treme,” co-produced and wrote the PBS documentary, “Faubourg Treme: The Untold Story of Black New Orleans” and authored a book.

The roundtable is presented by UNO assistant professor of art history Anna Mecugni in collaboration with Mary Niall Mitchell, history professor and co-director of the Midlo Center for New Orleans Studies.

It is funded by a grant of the UNO Office of Research and is co-sponsored by the Midlo Center for New Orleans Studies and the School of the Arts at UNO.