Standing in the history-rich building with its ornately designed dark wood and carved white marble, the University of New Orleans students were excited and slightly in awe of their surroundings. Many of the students had grown up in New Orleans and it was their first visit to the Louisiana Supreme Court building located in the heart of the Vieux Carrre’.

“It’s a beautiful building,” said Melissa Tierney, a junior marketing major who has aspirations of becoming an attorney. “I’m really excited about coming here and just to get a feel for what the Supreme Court looks like and what (applying) the law looks like in our state.”

A museum, located on the first floor of the state Supreme Court building, includes near life-size portraits of current and past justices and glass display cases that contain historical documents and photographs.

Among the contents of one display case are original documents from the landmark U.S. Supreme Court case Plessy versus Ferguson that began in New Orleans. The 1896 ruling by the U.S. Supreme Court upheld the racial segregation practice of separate but equal that buttressed the country’s Jim Crow laws for more than 50 years.

“I didn’t realize this was here,” said Daniel Baez about the court’s museum. “I’ve never been inside a courtroom or seen how cases are handled. Now, not only am I reading about it, I’m seeing it too.”

The students also were introduced to Chief Justice Bernette Joshua Johnson, the longest serving member of the court.

“She is the 25th chief justice of the Louisiana Supreme Court, the second female chief and the first African American chief justice in the court’s history,” said Robert Gunn, the community relations director who conducted the tour. “She first joined the court in 1994.”

The museum also includes a biographical display of Johnson’s legal career and accomplishments.  UNO student Gwyneth Deshommes, who is Johnson’s niece, appears in one of the photographs taken when Johnson was sworn in as a Supreme Court Justice.

Johnson is also one of the first African American women to attend and earn a law degree from Louisiana State University.

“She has so many accomplishments,” said Deshommes. “I just wanted people to see that, and possibly be inspired.”

The students also heard oral arguments on a tax dispute case that the Louisiana Supreme Court is reviewing.

“The experience simply made more real and more powerful to them many of the issues we have talked about in class,” Payne said. “I think they were very proud to be UNO students when the chief justice opened the session by welcoming the students and faculty of the University of New Orleans to the Louisiana State Supreme Court!” 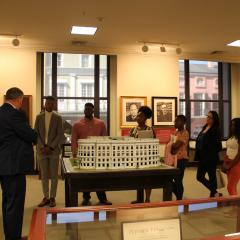 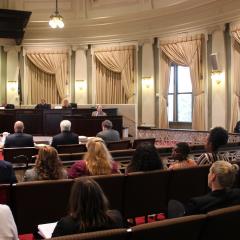 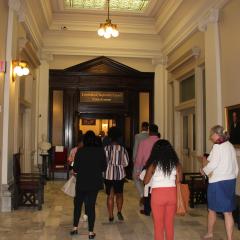 Visit to the Louisiana Supreme Court