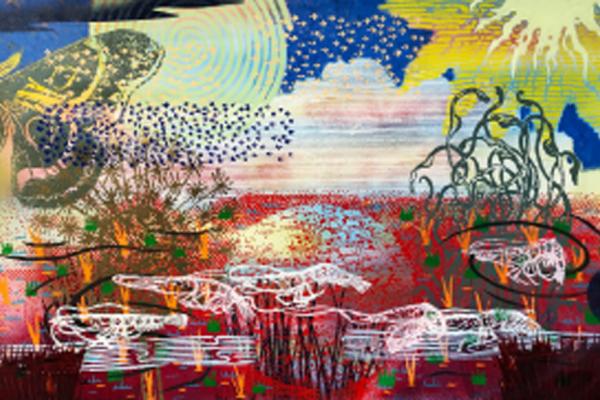 Rachel Breunlin, University of New Orleans assistant professor of anthropology and co-founder of the Neighborhood Story Project, curated the exhibit along with Bruce Sunpie Barnes and Francis X. Pavy.

The Louisiana State Museum, in partnership with the Neighborhood Story Project at the University of New Orleans and L’Union Creole, has unveiled “Le Kèr Creole (The Creole Heart): Runaway Slaves, Music, and Memory in Louisiana” at the Cabildo in New Orleans.

The new exhibition explores the legacy of the Louisiana Creole language through the historical memory of Juan San Malo, the leader of a community founded by former enslaved people in the 1780s and contemporary Creole music.

The multimedia exhibit, which will be displayed until May 10, 2020, features photography by Bruce Sunpie Barnes; lithophanes and paintings by Francis X. Pavy; archival images, maps, and artifacts from the Louisiana State Museum; an interactive altar featuring wood carvings by Charles Gillam; and Creole music written and arranged by Barnes and Leroy Etienne.

Rachel Breunlin, University of New Orleans assistant professor of anthropology and co-founder of the Neighborhood Story Project, curated the exhibit along with Barnes and Pavy. It is based on the book and CD “Le Kér Creole: Creole Compositions and Stories from Louisiana,” a collaborative musical ethnography produced by the Neighborhood Story Project, L’Union Creole, and the New Orleans Jazz National Historical Park and published by the University of New Orleans Press.

The exhibition begins with the story of Juan San Malo, as a starting point to understand the power of the language and the music that evolved from it. Because details of San Malo’s life are scarce, the exhibition presents an imagined journey from the plantation to the isolated swampland community he established with other former captives through the photography of Barnes and the artwork of Pavy.

The remainder of the exhibition explores the history and legacy of Louisiana Creole, created by enslaved Africans who combined French with African grammar patterns. The endangered language survives today, thanks in part to its use in music. Etienne, who grew up in a Creole-speaking family, and Barnes wrote and recorded new songs in Creole, which are featured in the exhibition.

“The Louisiana Creole language is an important part of our diverse culture,” said Lt. Gov. Billy Nungesser. “This exhibition shows how the language shaped historical memory and became an integral part of our musical heritage.”

Le Kèr Creole will be on display on the first floor of the Arsenal. The Arsenal is accessed through the Cabildo on Jackson Square and is open 10 a.m. to 4:30 p.m., Tuesday through Sunday. The last tickets each day are sold at 4 p.m.

Visit LouisianaStateMuseum.org for more information on the exhibit and events related to it.