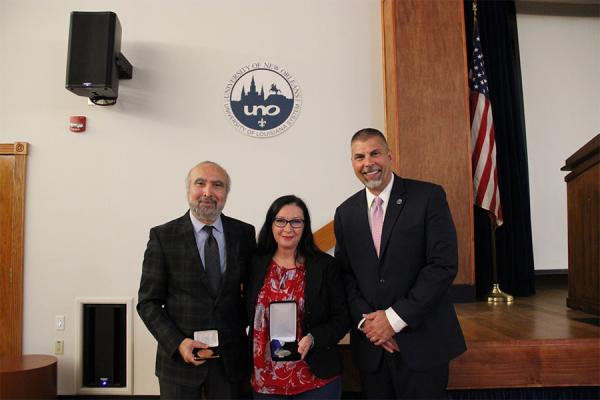 President John Nicklow (far right) with two of the three recipients of the University’s annual awards, (l-r)Parviz Rastgoufard and Karen Thomas. Margaret Davidson is not pictured.

The recipients of the three awards are:

“Dr. Rastgoufard is an eminent scholar, researcher and teacher,” Nicklow said. “He has served as a principal investigator on more than 50 research projects and his mentorship of junior faculty members ensures his legacy is a lasting one.”

•    Margaret Davidson, resident director and faculty member of the UNO Innsbruck Academic Year Abroad program, was awarded the Gordon H. “Nick” Mueller International Leadership Medallion. The medallion is named for Mueller, who spent 33 years at UNO as a professor, dean, vice chancellor, the founding president of the UNO Research & Technology Park and co-founder of The National World War II Museum. It is awarded to an individual who has provided significant leadership toward the internationalization of the University.

Davidson, who was in Austria and was unable to attend the ceremony, has worked for 30 years to enhance the internationalization of the University, Nicklow said. “Colleagues cite Dr. Davidson for her passion, ingenuity and tenacity,” he said.

•    Karen Thomas; associate dean for STEM recruitment, retention and outreach in the College of Sciences; received the Presidential Staff Medallion. It is awarded to the staff member who has demonstrated outstanding service to the University community.

“Dr. Thomas is an outstanding communicator who works closely with academic advisers to improve student success,” Nicklow said. “She supports undergraduate students groups with a special focus on women in STEM. And she plays a key role in bringing young people and community organizations to campus for events.”