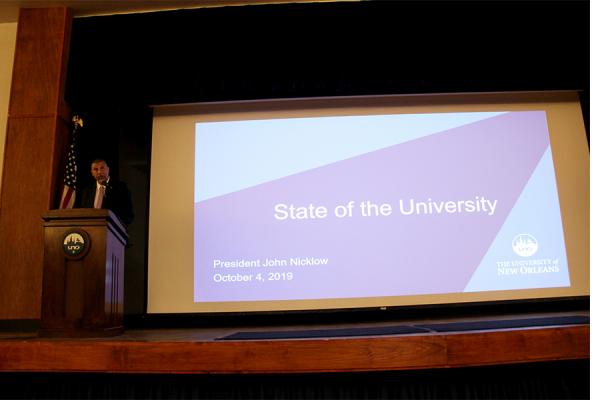 President Nicklow speaks during his biannual State of the University address before University of New Orleans faculty and staff Friday, Oct. 4, 2019.

Since taking the helm of the University in 2016, President John Nicklow has made increasing enrollment his top priority. On Friday he reiterated that emphasis and praised faculty and staff for the team effort in increasing the University’s total student enrollment for a second year in a row.

The University’s total enrollment stands at 8,231 students for the fall 2019 term, Nicklow said. That’s a 1% increase compared to last year’s enrollment and represents the first time in more than a decade the University has grown in back-to-back years.

“That’s a lot for us to be proud of, but especially so in a year when many universities around the country are seeing rapid declines and in a year when year-to-year average enrollments across all institutions nationally is expected to decline,” Nicklow said. “We have another good size freshman class and the quality is still among the highest in the past 15 years with a high school GPA of 3.3.”

In addition, the number of transfer students is up 3 percent, Nicklow said.

“Overall, our enrollment progress is good, but I would not call it great,” said Nicklow, who said his goal of the address is to inform faculty and staff and provide them with a realistic picture of the institution. “So, we need to make some tactical adjustments to produce even better results.”

Nicklow said he believes the biggest opportunities to grow the University’s undergraduate numbers are in two areas: first-time-full-time freshmen and stop-outs—students who previously left UNO or another university without earning their degree. Those students will receive significant attention this recruiting cycle, he said.

Nicklow’s other main priorities, he said, are to build the University’s research portfolio and to expand partnerships—partnerships with business and industry, nonprofits, alumni, and the community at large.

On the research front, the University’s portfolio has experienced “healthy growth,” Nicklow said.

The Office of Research expects to make 100 grant awards through the Tolmas Scholars program, which would be a 33% increase over last year. Tolmas Scholars are undergraduates who work with UNO faculty researchers; it is a program funded through a donation from the Tolmas Charitable Trust.

Partnerships take many different forms across campus and throughout the metro area, Nicklow said. They include strategic collaborations with alumni, local business owners who hire UNO graduates and global companies such as DXC Technology, the IT firm that is creating 2,000 new, high-paying jobs in the city.

In closing his address, Nicklow applauded the work of the faculty and staff and urged them to take pride in the accomplishments and to step up to the challenges.

“I hope you will leave here today with a sense of teamwork we have here, of pride and the pursuit of common goals. It really is something special,” Nicklow said. “Let’s spend our time and energy envisioning how we can work together to achieve greatness. And then let’s do it. Our city and our students deserve that.”