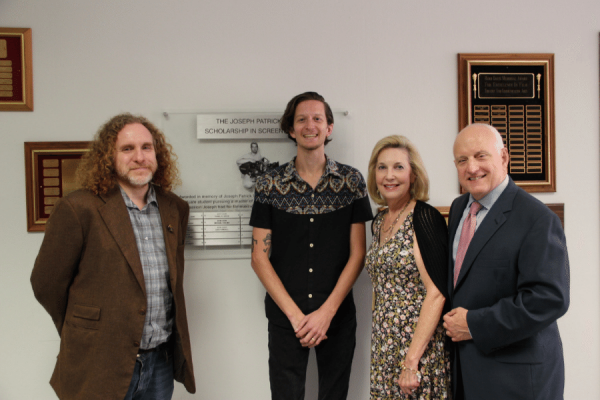 The University of New Orleans has awarded the Joseph Patrick Uddo Scholarship in Screenwriting for the 2019-20 academic year to Dave Randall. The scholarship, which provides $1,500 in tuition and fees for a full academic year, honors the memory of Uddo, a filmmaker and New Orleans native who died in 2008. Randall and members of the Uddo family gathered with others from the University community at a ceremony on Sept. 4 in UNO’s Performing Arts Center to celebrate Uddo’s legacy and how it benefits talented students like Randall.

Randall is a Portland, Ore. native who earned his bachelor’s degree from Portland State University in 2012. Upon graduation, he moved to Austin, Texas where he worked in the writing and film communities. He volunteered with the Austin Bat Cave, a nonprofit focusing on teaching children to write, and led a Young Adult Fiction to Film summer camp with the Austin Film Society. Randall screened films for the Austin Film Festival and wrote for the Austin Chronicle.

His winning script, “Front of House,” is a love letter to the dreams denied and developed by the people within the New Orleans service industry. He is currently writing a limited series about a legendary music family’s secret. He intends to pitch it to networks after graduation.

The Joseph Patrick Uddo Foundation started a scholarship at UNO to honor his brother's memory in a way that reflected his love of filmmaking, Paul Uddo said. A $40,000 gift in 2012 established the Joseph Patrick Uddo Scholarship in Screenwriting, and an annual award is made to an entering graduate student who is pursuing a Master of Fine Arts degree in screenwriting.