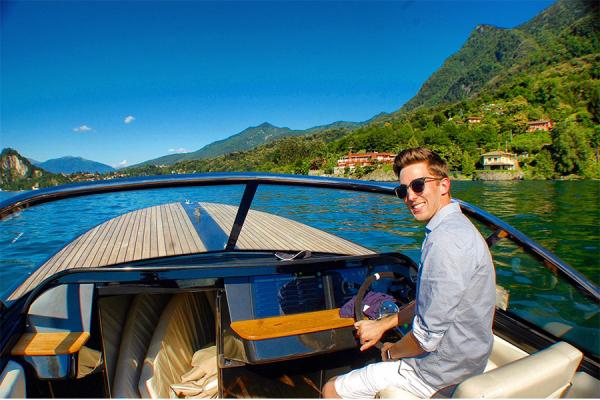 University of New Orleans engineering student Nigel Watkins is at the wheel of a Vita Yacht in Lago Maggiore, Italy.

University of New Orleans senior Nigel Watkins spent his summer vacation along the French Riviera and scenic Italian waterways. It was not, however, just “fun in the sun.”

Watkins, who is majoring in naval architecture and marine engineering, was honing his skills through a two-month internship with the European boat builder Vita Yachts.

“To be honest, I didn’t know what I was getting myself into,” Watkins said.

He’d read about the company and was intrigued that they specialized in high-performance electric-powered boats, Watkins said. He contacted the company, and after a flurry of Skype interviews and emails, he was offered the job as a naval architecture and marine engineering intern.

“I’ve always had a passion for clean energy and believe that’s where the marine sector will eventually migrate to, so it was a perfect fit being able to combine my two passions of luxury yachting and clean energy,” Watkins said.

“What I didn’t realize was over the span of a couple months I’d get to travel all over southern Europe working with some of the best designers and engineers this side of the world had to offer.”

The first couple of weeks were very production-focused and included meeting all of the boats’ contractors and manufacturers, Watkins said.

“The company is constantly trying to improve anything and everything from hull design to seat fabric so it was important to meet with those respective manufacturers to get the best product,” he said.

The first month was mainly spent performing sea trials in Lago Maggiore, Italy and testing the newest Vita model, Watkins said. The boats, a 27-foot and 30-foot models, can fit eight to 10 people comfortably, he said.

“Vita is also the only boat in the world that can supercharge much like Tesla, and we have our own in-house network of superchargers along the French Riviera,” he said. “We’ve spent this summer perfecting those systems and software to allow clients to seamlessly cruise along the Mediterranean with zero carbon emissions.”

Watkins spent the rest of the summer between Cannes,France and Monaco working with clients and consultants to perfect the final designs for a full production roll-out, he said.

“It’s satisfying work knowing that this project will hopefully have a domino effect and show the world the capabilities of electric propulsion,” he said. “Being a part of a small team has given me the opportunity to be involved in every aspect of the company from marketing to design to testing.

“Thanks to my education at UNO, I felt like I could consistently contribute and add ideas so that by the end of the internship it would be equally beneficial for both parties. I can’t thank everyone at Vita enough for the experience and look forward to what’s in store for the future.”

Watkins said the College of Engineering, as well as his involvement in student government and Lambda Chi Alpha fraternity, gave him the leadership and communication skills that made for a successful internship.

“The naval architecture and marine engineering department at UNO is second to none, and it really shows when you’re put in the field,” Watkins said. “The professors prepare you in a way where they don’t hold your hand, but rather make you work through problems on your own which is realistically what will happen once you graduate.”