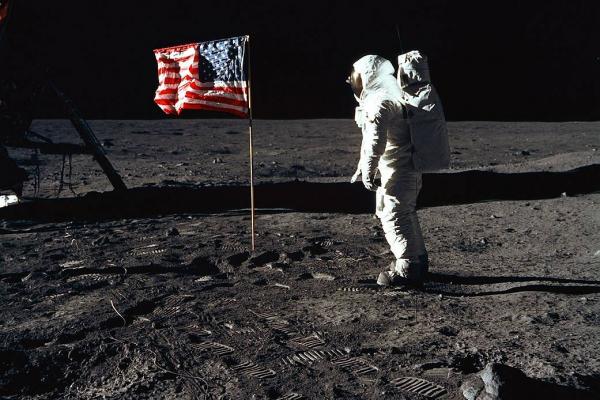 UNO Astrophysicist Greg Seab will deliver a presentation entitled “To the Moon” at 1 p.m. in the Kenner Planetarium in Kenner’s Rivertown. (Photo credit: NASA)

Fifty years ago this week the United States not only explored the “final frontier,” millions of Americans watched as the first person set foot on the moon. July 20 marks the 50th anniversary of NASA’s Apollo 11 lunar landing, and University of New Orleans astrophysicist Gregory Seab is set to discuss that momentous event in a presentation called “To the Moon.”

“This is completely unlike flying from one place to another on Earth. Most of the journey is spent coasting in ballistic flight. The trick is to arrive at the place where the Moon will be in three days—and then to brake into lunar orbit,” said Seab, physics professor and department chair. “The landing itself is exciting and dangerous, as is the return trip. So what I’m going to talk about is the process of getting to the Moon and back—the astronomy of the trip itself.”

Seab’s presentation is at 1 p.m. in the Kenner Planetarium in Kenner’s Rivertown and is part of a series of anniversary events on Saturday to celebrate what many have described as one of the most significant events in human history. The events are free and open to the public.

On July 16, 1969, astronauts Neil Armstrong, Edwin “Buzz” Aldrin and Michael Collins were launched into space from Kennedy Space Center in Cape Canaveral, Florida, for the four-day flight to the moon. The space flight, which totaled nine days, fulfilled President John Kennedy’s goal to land a man on the moon before the end of the decade.

“It is the first-time ever that human beings have walked on another planetary body other than the Earth itself,” Seab said. “The journey was very different from the fantasies of space travel from the first half of the 20th century. It was more real, more exciting, and more difficult than ever imagined. The Apollo program let humans look for the first time at our own planet as a whole. The experience is awesome.”

The lunar explorations required the talents and skills of scientists, engineers, technicians and ordinary working people to get the job done, Seab said. In addition, it provided substantial scientific results that helped to revolutionize our understanding of the origin and history of Earth’s satellite via the geological studies of returned moon rocks.

While the moon landing is a significant event, Seab said it is important to remember that it did not happen in isolation.

“The foundations for a trip to the Moon were laid centuries before in the intellectual curiosity and science achievement going back centuries, to Aristotle and Plato, Galileo and Newton, to Edison, the Wright brothers, Einstein, and all the other scientists and engineers who worked to advance little by little our understanding of the universe,” Seab said. “It would not have happened without the renewed emphasis on science and engineering that helped win World War II, and that continued into the space program and with the hopes and dreams of a generation of students encouraged to explore everything.”