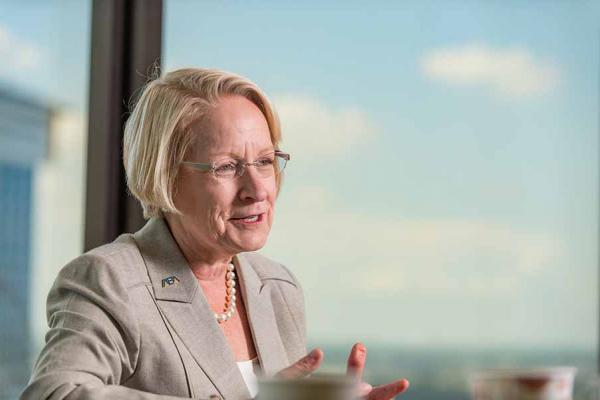 Alumna Judy Perry Martinez will be sworn in as president of the American Bar Association on August 12 in San Francisco.

University of New Orleans alumna Judy Perry Martinez grew up in Chalmette, La., about a block from the St. Bernard Parish courthouse. Despite that proximity to the parish’s judicial epicenter, Martinez, the president-elect of the American Bar Association, never thought about being a lawyer.

“I just think it’s wonderful when someone says, ‘I was 6-years old, and I knew I wanted to become an attorney,’” Martinez said. “I was not one of those children, and I really didn’t know any attorneys growing up.”

That epiphany, instead, came after a business law class at the University of New Orleans where Martinez was pursuing a marketing degree. The professor asked Martinez to stay after class one day, and gave her a nudge that would change the trajectory of her life.

After graduating from UNO in 1979, Martinez headed to Tulane University for law school. She graduated law school in 1982 and embarked on a corporate legal career that has spanned nearly four decades, including a stint as vice president and chief compliance officer for Northrop Grumman and a fellow-in-residence at the Advanced Leadership Initiative at Harvard University.

Prior to joining Northrop Grumman, the multibillion-dollar aerospace company, Martinez spent 21 years as a commercial litigator at Simon, Peragine, Smith & Redfearn, where she was a member of its management committee.

“That just tells you that somebody’s belief in a young person can change their lives,” Martinez said referring to her former marketing professor’s suggestion.

On August 12, Martinez will be sworn in as the president of the American Bar Association, an organization of more than 400,000 members that, among other services it provides, recommends legal policies and sets academic accreditation requirements for U.S. law schools.

Martinez has held various leadership roles in the ABA for more than 30 years, including chairing the ABA’s Standing Committee on the Federal Judiciary, which evaluates all prospective nominees to the federal bench.

“I see the active participation in a bar association as essential to good lawyering,” Martinez said. “I can attest to the fact that they expose you to new ideas, different thoughts and expose you to people with different perspectives than you have and, as a result, they help you hone your skills.”

Martinez’s husband, Rene, along with their four children, will also attend.

“I will be guided by the association’s unparalleled history of standing up for the voiceless and its unwavering commitment to support our members to be the best that they can be each day for their clients and the public they serve,” Martinez said during her acceptance speech last year when she became president-elect.

As president, Martinez will be the official spokesperson for the group. She is also charged with advancing the ABA’s four primary goals:

“Everything we do, we do to advance those four goals,” Martinez said. “In some organizations, the presidency sort of zigs and zags because it’s just one year, but our organization really strives for strategic leadership and continual leadership that advances the organization’s goal.”

Since her election in 2018, Martinez has traveled with current president Bob Carlson to various events, including spending a week providing pro bono legal work at a residential detention center in Texas where she helped interview migrants, some of whom were seeking asylum in the United States.

“You see people who are desperate to come to this country,” Martinez said regarding her observations of the detention center. “They need help telling their stories … getting information about the (legal) process and what’s going to happen in court when they pursue their claims is critically important.”

The ABA projects that its members will provide legal aid to more than 20,000 unaccompanied minors this year to help them make informed decisions throughout the immigration process.

In June, the ABA issued a statement decrying the “inhumane and illegal” treatment of unaccompanied immigrant children held in government custody, as had been widely reported in the news media.

“We issue statements if we feel an issue is critical for us to speak on,” Martinez said.

Martinez’s previous leadership roles in the ABA includes a 2011 appointment as chair of the ABA Standing Committee on the Federal Judiciary, which evaluates all prospective nominees to the federal bench, the ABA lead representative to the U.N., the members of the ABA Board of Governors and the members of its executive committee.

Martinez worked with other Louisiana bar leaders to establish the New Orleans Pro Bono Project, and served as its first chair in the early 1980s. She has received numerous awards and recognition for her work in the legal field, including the Sam Dalton Capital Defense Advocacy Award from the Louisiana Association of Criminal Defense Counsel in 1997, the Michelle Pitard Wynne Professionalism Award from the Association of Women Attorneys in 1998, and the Alliance for Justice Award in 1999 from the National Gay and Lesbian Law Association.

She was named The Outstanding Young Lawyer in the State of Louisiana in 1990 and the Louisiana Bar Foundation's 2001 Distinguished Attorney. In 2012, the Federal Bar Association, New Orleans chapter, presented her with its Camille Gravel Public Service Award.

The half-dozen floor-to-ceiling windows in Martinez’s Poydras Street corner office, located on the 30th floor in downtown New Orleans, offers panoramic views of the Mississippi River, the Superdome, Uptown, and, on this day, a cloudless blue sky.

“I love the rain,” Martinez says. “It just feels great. You see the clouds roll in and the rain.”

Her office is neatly arranged with sleek furnishings that complement the abundance of natural light and the aerial view. Pictures of her husband and their four children line a bookshelf. There’s also a picture of Martinez and several women associates at the firm laughing together—it was taken during “the early years,” Martinez said.

Despite a career steeped in service and accomplishments, Martinez shrugs off compliments and counters that she’s been given opportunities.

“I see them more as opportunities than accomplishments,” she said.

In the 1950s, Martinez said her dad owned a furniture store on the corner of St. Claude and Desire in the Upper 9th Ward. Her three older brothers attended Holy Cross, while she graduated from St. Mary’s Dominican High School. She initially attended LSU after high school, but her family’s finances dictated a transfer after three semesters, Martinez said.

“We had a good life, and UNO fit in perfectly,” she said. “I worked two jobs while I was there, and was blessed to have a strong education.”

Her siblings and one of her sons live in Baton Rouge. Her oldest brother, Al, also an attorney and UNO alumni, moved there following Hurricane Katrina, she said.

She and her husband recently downsized to a smaller home in New Orleans about 10 blocks away from the house they’d lived in for 27 years, she said. To her delight, another son and his wife recently purchased a house nearby after living out-of-state for a decade.

“They moved 200 steps from our new house,” Martinez said. “That’s the greatest joy! His dog was over this morning.”

Her family, which also includes a daughter and son living in Washington, D.C. keeps her rooted and motivated, she said.

“I have a big extended family and we love getting together,” Martinez said. “We eat; it’s all about the food!”

As she prepares to take the helm of the organization that bills itself as the “national representative of the legal profession,” Martinez already knows the frenetic pace of the job. Her schedule is basically booked through next year with national and international obligations.

To handle the chockablock schedule, Martinez said she tries to exercise daily and give herself at least 10 minutes every morning to center herself. She has a “calming” app on her phone that provides daily themes.

“Today it was accepting criticism,” she said. “It’s just about 90 seconds to two minutes of talk at the end, but the first eight minutes are just music and breathing, and then I walk.”

Martinez said she is honored and humbled to become the new ABA president, where she also will represent her state, city and alma mater.

“I’m so proud to be doing this and being from Louisiana and from New Orleans and being a UNO graduate,” she said. “It could be someone else easily doing this, but because of all the support all these years, that’s why I’m able to do this.

“There is nobody more proud of her city.”