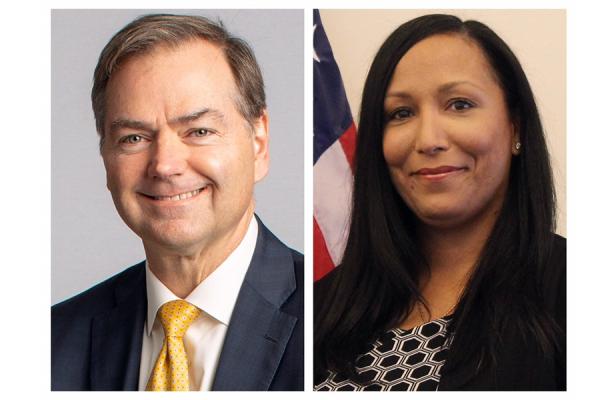 Phillip May (left) and Roxanna Rodriguez-Torres have been selected to receive distinguished alumni awards from the University of New Orleans Alumni Association.

Both will be honored at the Distinguished Alumni Gala, which will take place on Nov. 7 at 7 p.m. in the National WWII Museum’s United States Freedom Pavilion: The Boeing Center.

“Alumni from the University of New Orleans excel in every imaginable endeavor,” said President John Nicklow. “It is fitting that we are honoring Phillip and Roxanna because, while they work in very different fields, they exemplify the determination, perseverance and excellence found in so many of our graduates. They are both very deserving of this recognition.”

As president and CEO of Entergy Louisiana, May is responsible for the company’s customer service, regulatory and public affairs, resource planning, economic development programs and charitable contributions, as well as its financial performance. He previously served as vice president of regulatory services, vice president of transition management, and managing director of corporate strategic planning and analysis.

May, who joined Entergy in 1986, holds a bachelor’s degree in electrical engineering from the University of Southwestern Louisiana and a Master of Business Administration from the University of New Orleans. He serves on the boards of the U.S. Chamber of Commerce; GNO, Inc.; the Louisiana Nature Conservancy; Teach for America of South Louisiana; City Year Baton Rouge and Second Harvest Food Bank.

Rodriguez-Torres advises and supports the president, his senior national security advisers and cabinet officials on national security and policy issues related to transnational organized crime. In 2018 she served as the deputy assistant secretary for law enforcement policy under the Department of Homeland Security’s Office of Strategy, Policy and Plans. Her previous positions within the Department of Homeland Security include intelligence analyst and chief of staff for the Homeland Security Investigations Office of Intelligence. She also worked as an analyst for the U.S. Customs Service. She began her career as a counterintelligence agent and linguist with the Louisiana National Guard.

Rodriguez-Torres received a bachelor’s degree in general studies from the University of New Orleans. She has completed linguist certifications in Russian, Kurdish and Spanish from the Department of Defense’s Defense Language Institute.

The Distinguished Alumni Gala will also recognize distinguished alumni from each of the University’s four academic colleges, interdisciplinary studies and athletics.

The gala’s venue is a testament to UNO’s lasting impact on the community—the National WWII Museum was conceived in UNO’s history department by professors Stephen Ambrose and Nick Mueller, the museum’s former president and CEO.