Muleshoe to Mid-City: The Easons’ Legacy of Learning 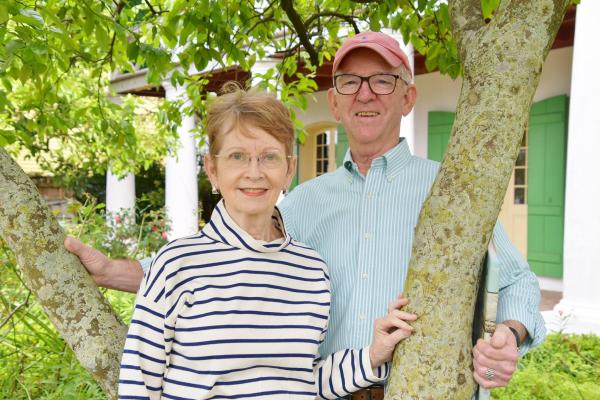 Between them, Sandra and Bobby Eason have given UNO 80 years of service.

Inside their welcoming Mid-City home, Bobby and Sandra Eason reflect on their time at the University of New Orleans.

“UNO has been very good to us,” they say, almost in unison, before recounting how the University has directly affected their lives and the lives of their children. Founding Chancellor Homer Hitt hired Bobby as a newly minted Ph.D. Sandra earned two advanced degrees there, and daughter Connie was a dean’s list graduate with a degree in geography. Son Benjamin met the woman he would marry while they were both UNO students. Ben and wife Helga Tong both would later both take jobs at the University of New Orleans Research and Technology Park.

Bobby expresses gratitude for having been allowed to bring an entrepreneurial component into his roles as teacher, administrator, researcher and public servant.  It allowed him to develop innovative educational programs to serve UNO, his students and the health and movement science professions.

Sandra says of her UNO experience, “It was a special time. I just loved it.”

Bobby Eason and Sandra Harris met when they attended high school in Muleshoe, Texas, a panhandle town which, according to the U.S. Census, has an area of 3.4 square miles with a population near 5,000. Both enrolled in college at nearby Texas Tech, a public research university in Lubbock, where they became sweethearts and married as undergraduates. She earned a degree in business, and he studied health and physical education. With his master’s degree completed by 1967, Bobby launched a career in education and coaching. He took a job with the Brazosport Independent School District, 50 miles south of Houston, and she gave birth to the couple’s first two children.

By 1972 Bobby had earned a doctorate in education from the University of Houston, and he joined the faculty of what was then Louisiana State University at New Orleans (LSUNO). The health and physical education field was growing and evolving, and the leadership at LSUNO was ambitious in its efforts to continue expanding the academic offerings available in New Orleans. Bobby helped nurture the growing Human Performance and Health Promotion undergraduate degree program and was promoted to associate professor within three years, an admirable pace for a young faculty member. He was a full professor by 1980 and served as department chair from 1990 to 1999. During these years, with a strong faculty, he was instrumental in developing new academic programs including a Master of Arts in Human Performance and Health Promotion, a graduate certificate program in gerontology and state-of-the-art research laboratories.

Recounting these and other accomplishments during his UNO tenure, Bobby notes another experience of which he is especially proud. Having already launched a successful master’s degree option and the Taiwan cohort, Bobby sought to expand UNO’s offerings in Human Performance and Health Promotion even further. Eason worked with with the Department of Curriculum and Instruction (C&I) faculty to develop a Collaborative PhD Model, which added several hours of seminar courses under the C&I umbrella but with health and movement science topics. C&I faculty members co-sponsored the dissertations. Eason recalls the development of the new degree program as a huge success for the department as well as the students who would be able to intensify their studies in pursuit of the terminal degree. He notes alumni from the program who have gone on to great success in their careers, including Melinda Sothern, a renowned childhood obesity expert and tenured professor at the LSU School of Public Health who received notable media attention for the “Trim Kids” healthy weight program she helped design. Other Ph.D. graduates went into nutrition, sports medicine, physical training, physical education and other jobs related to human movement and health promotion.

As Bobby was ramping up academic offerings on campus and abroad, Sandra was also busy. She had been managing a small portfolio of properties the Easons acquired almost by accident. They never set out to become anyone’s landlord, but a purchase and a sale here led to a purchase and a sale there before anyone referred to it as “flipping houses.” While getting into the real estate business seemed to happen easily during good economic times in Louisiana, Sandra said the work was very demanding. After a while, she was ready to try something new. Sandra applied and was accepted by the Department of Curriculum and Instruction into the master’s degree program for Program Evaluation. As a graduate student, she directed a program aimed at developing teacher preparation models. By 1992, she had earned a Ph.D. in education.

Around that time, UNO created a new position in the graduate school. The associate dean position had been eliminated, but the workload still needed to be handled. From a highly competitive pool of candidates, Sandra was hired for an entry-level administrative position. Beyond her official position in the graduate school, she also served over the years as a UNO Alumni Association board member, liaison to the University Senate and president of the UNO Women’s Club. She enjoyed the work immensely and in time worked her way up through the ranks until the title was restored to reflect the workload she adopted. She retired from UNO in 2008 as associate dean of the Graduate School. Also that year, she was awarded the Cooper R. Mackin Medallion. Established to honor the third chancellor of the University of New Orleans, it is awarded to a faculty or staff member who has made outstanding contributions in support of the University's mission and demonstrated excellent, sustained and selfless service to the University.

The Easons continue to engage with and support UNO long after officially retiring. Bobby is an active member of the UNO Founders Club, an association of current and former employees established to honor those who were involved in the earliest days of LSUNO. The UNO Founders Club is a key supporter of the Homer L. Hitt Presidential Distinguished Lecture Series, a tradition established by the University’s founding chief executive to bring to the young campus distinguished scholars, noteworthy artists, and accomplished national leaders. A public event, Hitt’s goal for the lecture series was to enrich student learning on campus while strengthening the University’s position in the greater New Orleans community. A few years ago, Bobby set a particular goal to generate a healthy endowment for the Homer L. Hitt Presidential Distinguished Lecture Series. Starting with only the initial $5,000 gift from founding Chancellor Hitt, Bobby conducted a 5-year fundraising campaign which brought the endowment fund up to almost $150,000. The interest on the endowment provides for the Homer L. Hitt Presidential Distinguished Lecture Series to continue in perpetuity.

In addition to helping sustain the lecture series for the long term, Eason is also proud to have had a role in designating a specific space on campus to honor current and previous leaders of the University. At the time of Dr. Peter Fos’s investiture in 2012, portraits of some, but not all, of UNO’s leaders had been painted and were hanging in different locations around campus. Eason took the initiative to assemble all existing portraits in a single place and raise the funds necessary to complete the collection with three additional portraits of leaders who did not have one yet. Current President John Nicklow’s portrait was added when he assumed the helm in 2016. Today, a large meeting space in the Administration Building called the Presidents’ Conference Room is also a special art gallery of sorts, one that is complete only because of Bobby’s care and attention.

Even after 80 years of service to UNO between them, the Easons are still finding ways to support the University of New Orleans and the students it serves. They recently made arrangements through the Office of University Advancement to establish an endowed fund, the interest from which will provide a scholarship each academic year for a UNO student pursuing a degree in the education field. Donors like the Easons who include UNO in their estate planning become members of the Legacy Society, named as such because its members create a lasting legacy that ensures educational opportunity for future generations.

Asked what UNO has meant to them, Bobby responds.

“It has meant a level of prosperity, a career of tremendous meaning and the satisfaction of having lived a good life.”

Now, thanks to the Easons’ gift, there is a scholarship waiting to ensure prosperity, meaning and a good life for a future Privateer, and the Easons can enjoy the additional satisfaction of having continued a strong tradition among University of New Orleans alumni of finding success and paying it forward.