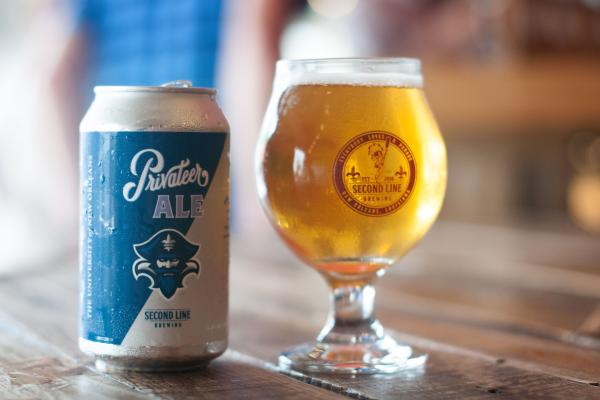 Just in time for the sultry summer months, Second Line Brewing, in collaboration with the University of New Orleans, has released Privateer Ale, a refreshing golden ale and the University’s new officially licensed beer. Privateer Ale represents the first collaboration between UNO and the independently owned Mid-City craft brewery, well known for beers such as Batture Blonde Ale and A Saison Named Desire.

“We’re really excited about giving our alumni an opportunity to enjoy a delicious local craft beer and support their alma mater in the process,” said President John Nicklow. “We have more than 47,000 alumni in metro New Orleans and I’m sure they’ll be UNO Proud to drink Privateer Ale. If your favorite bar, restaurant or grocery store doesn’t carry it yet, ask for it.”

Privateer Ale is a crisp golden ale brewed with Mosaic and Idaho 7 hops. It is 4.3% alcohol by volume with 15 international bitterness units, making it a light and thirst-quenching beer.

“We are so pleased to be working with my alma mater to create Privateer Ale. We look forward to supporting and promoting the university that helped me achieve my goals, just as it has for so many others in the city,” said Second Line Brewing co-founder Karen Logan, who earned a Master of Business Administration degree from UNO in 2005.