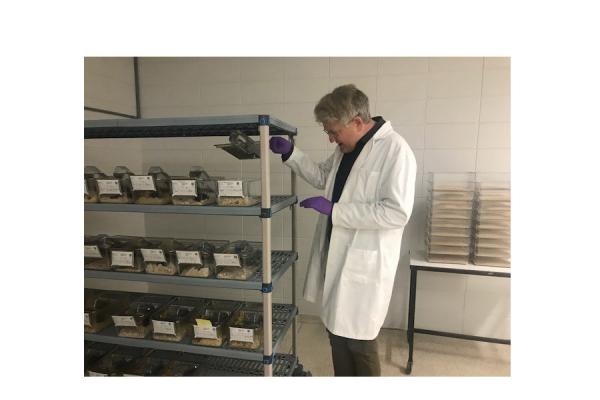 University of New Orleans Psychology professor Christopher Harshaw stands in his lab where he’s using mice to study the possible link between a commonly used pain reliever and developmental disorders.

Could using a common, over-the-counter pain reliever contribute to neurodevelopmental disorders, such as autism, in children? University of New Orleans Psychology professor Christopher Harshaw is pursuing the answer to that question using mice to develop a “translational” model.

Several recent epidemiological studies have linked the use of acetaminophen in infants and young children to attention deficit and social disorders in humans, Harshaw said. A few animal studies have also found long-term differences in brain and behavior. However, few studies have examined behaviors specifically relevant to autism spectrum disorders, and none has used appropriately scaled doses comparable to what parents would give children suffering from a fever, so it is not clear if those results are relatable to what happens in humans, he said.

Harshaw’s study focuses on the developmental reaction that mice have to acetaminophen, best known by its popular brand name version, Tylenol.

“It’s something that needs to be looked at given that it’s the most frequent drug that any kid in the U.S. will take, and most kids will get a lot of it,” Harshaw said.

Harshaw, whose specialty is developmental psychology, is also a trained animal researcher. He received a one-year grant for $6,600 from the Louisiana Board of Regents to complete a pilot study on the question.

The goal for the project is to generate data that can be used to obtain funding to take a larger, more in-depth look at this possible link, while also examining the effects of other fever-reducing medicine, such as ibuprofen, he said. Harshaw said he’d also like to study a common practice among parents of switching back and forth between Tylenol and Motrin to reduce fever in children.

“Just to do a more thorough, full analysis of the situation,” he said.

While genetics play a major role in the development of autism, epidemiological studies indicate that other environmental factors likely act as triggers for certain individuals with genetic vulnerabilities, Harshaw said. Studies have shown a relationship between early exposures to acetaminophen, either prenatally or early in life, and the emergence of attention deficit hyperactive disorder (ADHD) and cases of autism with a lot of hyperactivity, he said.

His hypothesis is that early exposure to acetaminophen will have some long-term impact on the behavior of the mice, especially in males. Toxicology studies have indicated that acetaminophen is more toxic to males, Harshaw said. His yearlong study will examine autism-relevant social, communicative and repetitive phenotypes in mice exposed during early development to fever alone, acetaminophen alone or fever plus acetaminophen. The control group will not receive any drugs.

“One of the primary things that I’m doing is giving appropriately scaled doses—doses that we know are equivalent to what humans get,” Harshaw said. “We’re actually treating fever in the animals; some of the animals have fever, some don’t. Some of them get acetaminophen, some don’t. So there are four different conditions.”

The mice will be injected starting around day five, which is comparable to a late stage gestational human fetus, Harshaw said. Other injections will be given at day eight and day 11. Mice get kicked out of the nest by day 21, so the last injection on day 11 would be comparable to a 10-year-old child, Harshaw estimates. His lab will then study the mice for about 80 days, which by then they are sexually mature.

Harshaw said he expects to complete his study by December.

“This is just to start the ball rolling,” Harshaw said. “Hopefully we’ll have a good model of exposure that is relevant to what’s going on in humans.” 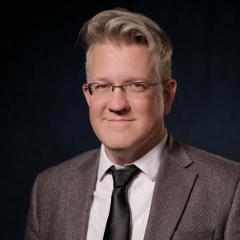 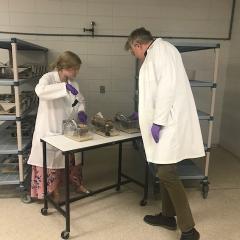 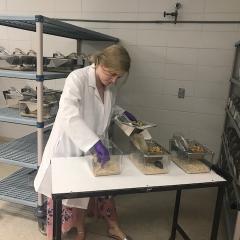 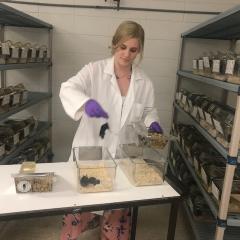 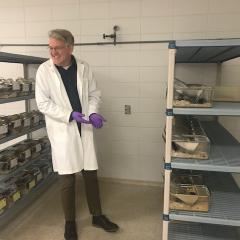 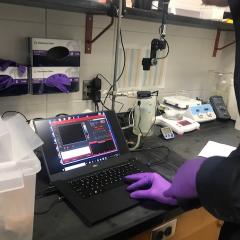