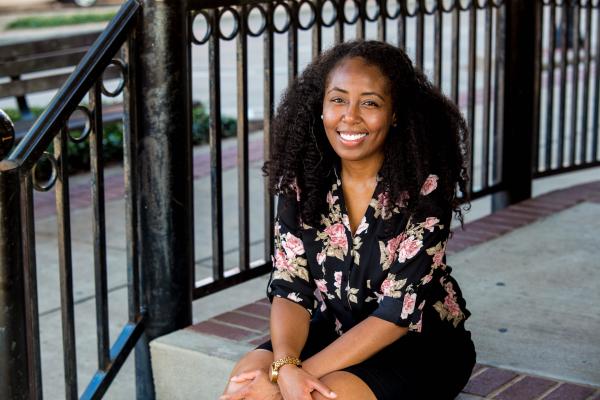 When she worked as a financial analyst in Washington, D.C., Nicole Fuller, now a management professor at the University of New Orleans, said she felt unfulfilled and longed for career that not only challenged her, but impacted lives.

“I didn’t feel like I was making a difference in anybody’s life, and I have a passion for working with young people,” said Fuller, whose expertise is in strategic management and entrepreneurship. “A lot of my volunteerism after work had to do with mentoring and teaching.”

Still, the sense of being “misaligned” and not maximizing her full potential lingered.
It was not until she found herself applying for her fourth corporate job, that Fuller recalled a conversation with one of her former Georgetown University business professors. He had asked whether she’d thought about pursuing a doctorate degree.

At the time, she had not, intent as she was on finishing her bachelor’s degree and getting a job. About five years after graduating, she found herself contemplating whether she really wanted to stay in corporate America.

“I reached back out to my undergraduate professor … and we met for dinner,” Fuller said. “I said ‘What were you saying about getting a Ph.D.?’”

He told Fuller about the PhD Project, a support network aimed at increasing workplace diversity by increasing the number of African Americans, Hispanic Americans and Native Americans on business school faculty.

“My goal was to pursue a career that allowed for continuous learning, mentoring future leaders and producing work that impacts the community in meaningful ways,” said Fuller, who teaches business policies and problems, and business planning.

In 2010 she was selected to attend the PhD Project’s annual conference at which participants are introduced to the doctoral program process through a variety of sessions, including talks with deans, professors and current minority doctoral students about the benefits of pursuing a business Ph.D.

Once a candidate is enrolled in a doctoral program, the program offers resources and its members act as a support system, Fuller said.

“I ended up quitting my job at the end of 2011 because I decided to get an MBA,” Fuller said. “A lot of the Ph.D. programs don’t require an MBA, but it does make you more appealing in the application process.”

Fuller earned a full graduate scholarship to the University of Arkansas and went on to earn her doctoral degree in business from Texas A&M University in 2018. She also earned the title “Dr. Cinco” for quintupling the number of minority business school professors since The PhD Project started in 1994.

“The decision to leave my corporate position in finance and move across the country to enroll in graduate school full-time was a complete step out on faith,” Fuller said. “The support I received and network connections I established through The PhD Project made the rocky road from enrollment to graduation smoother. I am grateful for The PhD Project and excited to be Dr. Cinco!”

That research fuels her passion for advocacy, Fuller said. She wants to develop and share business theories about the operations of small companies in poor communities. Management theories developed from studying larger companies in more affluent environments are not always applicable, she said.

“I want to speak for the business environments that other people or other researchers are not speaking for,” Fuller said. “It’s typical for researchers to do research on S&P 500 firms, but I’m really interested in the smaller businesses operating in distressed communities, and I’m interested in the large businesses operating in or near distressed communities.”

Fuller incorporates her research into the business courses that she teaches at UNO, by pushing her students to look beyond the textbook’s typical focus on management practices at large, well-known companies.

“I often would use an example of a large company, but then I would say, ‘Now let’s look into inner-city Dallas, or let’s apply the same thing to inner-city New Orleans and let’s see if this still stands up.’”

Her research interests also include corporate social responsibility and exploring how companies choose to serve the communities they operate in, and business gentrification, she said.

“We talk about gentrification and how individuals and households are being relocated and displaced, but there’s also a sense of gentrification happening in business environments sometimes,” Fuller said.

When new businesses move in, and the area becomes a more up-and-coming neighborhood, some existing businesses continue to thrive. Others end up shutting down, she said.

“One of the projects I’m working on is looking at how that shift takes place,” Fuller said.
Fuller, who moved to New Orleans in 2018, said she’s looking forward to expanding her research canvas to include New Orleans businesses.

“I want to look back and know that the work I did was meaningful and impactful,” she said.